In the latest from the You Don't Even Know What Those Terms Mean, Do You? department, we have a video on the site Spirit Science called "This 8 Year Old Kid Uses Crystal Grids to Transmute Negative Energy."

I know that taking anything from Spirit Science is kind of a cheap way to get a Skeptophilia post at this point.  This site first gained attention from a video that was narrated by an animated character whose voice sounds like Alvin the Chipmunk on quaaludes, and that basically told us that Everything Is Connected and Energy Flows Through Us and other vapid New Age platitudes, every once in a while throwing in a nice science-y word to keep us thinking that what they were saying actually meant something.

But so far, all we have is a flashy woo-woo take on Science, The Universe, and Everything, very much in the tradition of What the Bleep Do We Know? (the latter produced by none other than the infamous J. Z. Knight, of Ramtha fame).  Spirit Science, therefore, is kind of low-hanging fruit, and I've never felt all that inclined to address their claims.  If you can even call them "claims."  (For a funny response to the video link I posted, take a look at this one.)

Of course, the fact that Spirit Science is 100% USDA Grade A Bullshit hasn't dissuaded people from watching the Spirit Science channel on YouTube in huge numbers, and as a result, there are now 26 (or more) videos narrated by Alvin.  All of which seemed more depressing than interesting, until the article about the eight-year-old started showing up all over Facebook and other social media sites.

What bothers me about this one is not, strictly speaking, the woo-woo aspect of it.  The idea of "crystal energies" has been around for a long time.  I remember a woman coming over to my house in response to For-Sale ad I'd placed in the newspaper, and her picking up one of the quartz crystals that had been collected years earlier by my dad on one of his rockhounding trips.  "Ooh," the woman said, caressing the crystal.  "This one is lovely!  I can feel it focusing my energy in such a positive way!"

It was an effort not to guffaw directly into her face. 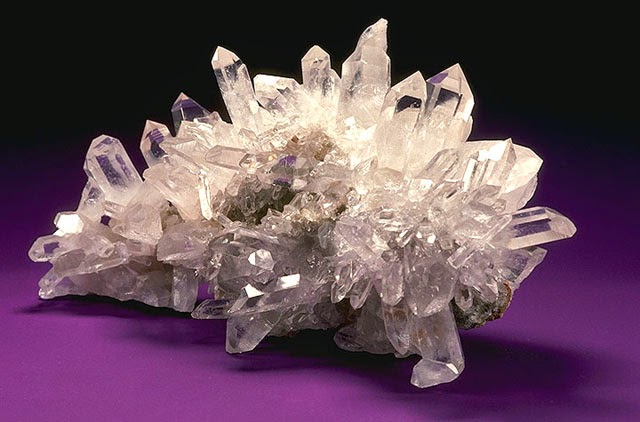 So what bothers me about this story isn't the bullshit aspect of it, but the exploitation aspect -- given that it must be the kid's parents who (1) taught him all of this nonsense, and (2) set up this "interview."  At the end, too, the kid says that he'll be happy to set up a "crystal grid appointment" for anyone interested, hinting at a monetary side of the whole thing that I'm sure will come as no great shock to anyone reading this.

And yet the people interviewing him never mention anything about exploitation.  They treat his fancies as if they were entirely real, starting with the guy who introduces the segment saying, "What you're about to see is a perfect example of the consciousness of today's children."  Then we're shown the kid and his crystal arrangement, and the interviewer treats him with great seriousness, asking him how it works.

"It captures the dark energy in these three webs," the kid tells her, "and then disposes of it using this (crystal) turning it into my energy... it goes all the way around the world.  And the universe."

Mmm-hmm.  Sounds completely plausible.  We hear a lot more about crystals focusing energy (never, of course, defining the terms "focus" or "energy"), and light and dark energies shooting around, and so on.  Eventually, the interviewer gets to what really was the only germane question she asked:  "How did you know how to make this web design?"

The kid's response:  "I knew... because the rocks know exactly how to dispose of dark energy...  they told me.  I go up to one rock, and find the key, put my finger on it, and then I put it up to my ear and hear what it's saying...  a key is a part of the rock, every rock has it, that is the energy key point of it."

Now, I raised two boys, who were both imaginative and creative youngsters, always making up games and let's-pretend worlds.  My older son, especially, always has had a wildly creative mind, and we still have stories he wrote and board games he dreamed up, the latter of which had rules so abstruse that they make Magic: The Gathering look like a tic-tac-toe game.

Here, though, we have parents (never seen on the interview, but you know they're there) who are feeding this young person with the impression that his fantasy world is real -- as if I had told Lucas when he was little that the plastic dinosaurs he loved to play with actually were alive and aware, because he had somehow made them so.  This is, put simply, exploiting a child's imagination for fame and (probably) money, all the while leading him to believe that his naturally blurred boundary between reality and fantasy isn't just hard to delineate, it doesn't exist.

And they're doing so with the complicity of the people who interviewed him, and with the encouragement of thousands of people who commented and have now passed this story all over the place.  While it's heartening that the first comment was appropriately snide...  "a kid arranges his parent's mineral collection and repeats a bunch of nonsense and now he is a guru.  namaste" -- note that this commenter was immediately shot down with responses like "Get a brain."  And most of the other comments were wildly positive:


We are in the Age of Aquarius now....for those of you that don't get this...why are you even watching it if it isn't your "thing"? ...this kid is truly gifted...and if you don't understand it....you might wanna wake up to the New Age....Just saying!

Too bad for all of those brothers and sisters who speak ill of what they do not know. It is understandable though. Not every being on this earth is connected to the great planet.

Children like this that can see through the illusions of what we believe to be true give me hope that we just might not end up destroying the Earth.

This kid is, on the surface, doing what kids do; playing with stuff and making up stories.  But the adults who are currently turning him into a mini-celebrity amongst the woo-woo crowd are doing him no favors.  It's to be hoped that he'll eventually figure out that what he's saying is nonsense.  I just hope that by that time, he hasn't been so suckered in by the lucrative side of woo-woo that he becomes the next J. Z. Knight, channeling 20,000-year-old guru spirits from Atlantis in front of adoring crowds, and becoming filthy rich in the process.
Posted by Gordon Bonnet at 3:59 AM