Coming right on the heels of yesterday's post, wherein I mused over the question of whether the woo-woos are actually just kidding, and are seeing how outlandish their claims can become before we skeptics catch on, we have a story today that makes me ask the same question about the creationists.

It will probably come as no great shock that the latest bizarre salvo from the biblical literalists has come from none other than Ken Ham, whose trouncing by Bill Nye the Science Guy in a debate that brought to mind the phrase "having a battle of wits with an unarmed man" seems not to have dampened his convictions.  Now, according to a story that I first saw in (of all places) the Pakistan Daily Times, Ham is claiming that an extraordinarily well-preserved Allosaurus specimen is concrete proof of the biblical creation story.

Yes, I know that Ham et al. believe that everything is proof of the biblical creation story.  But does it seem to you that deliberately choosing a 150 million year old fossil as proof of their mythology is a little... crazy?  They're on shaky enough ground with all of the "look at the pretty butterflies and fascinating fish, god musta did it" stuff that the Creation Museum excels at; why would they deliberately pick a Jurassic-era dinosaur? 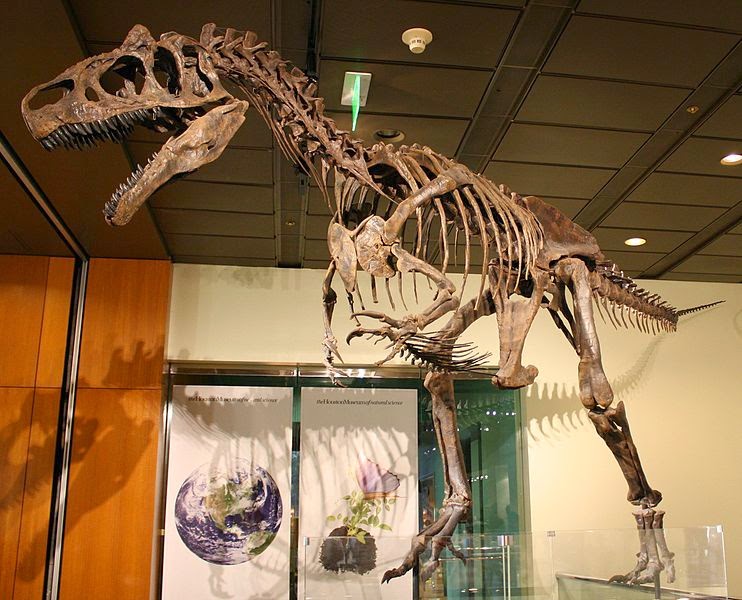 [image courtesy of photographer Andy Tang and the Wikimedia Commons]

And it's not like it came cheap, either.  According to Ham's own site, Answers in Genesis, the Creation Museum shelled out $1.5 million for the privilege of displaying something that conclusively disproves their entire raison d'être.  Not that that's the way they put it, of course.  Ham was quoted in the article as saying that the allosaurus skeleton "fulfills a dream I’ve had for quite some time. For decades I’ve walked through many leading secular museums, like the Smithsonian in Washington, D.C., and have seen their impressive dinosaur skeletons.  But they were used for evolution.  Now we have one of that class, and it will help us defend the book of Genesis and expose the scientific problems with evolution."

I read that entire passage with the following expression on my face: 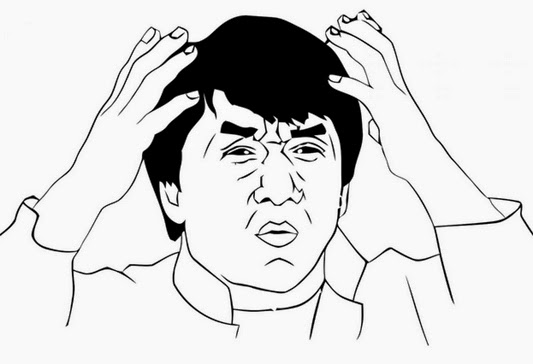 But it only got worse from there, because then Michael Peroutka weighed in.  Peroutka is the guy who sold Ham the skeleton, and he said that the allosaurus "is a testimony to the creative power of God in designing dinosaurs, and that it also lends evidence to the truth of a worldwide catastrophic flooding of the earth in Noah’s time."  Dr. Andrew Snelling, the Creation Museum's staff geologist, said that "Ebenezer" (as they're calling the allosaurus) "most likely died in Noah’s Flood, over 4,300 years ago.  In fleeing the rising waters... Ebenezer was swept away in a debris flow and buried rapidly under massive amounts of sediment, preserving many of its bones," adding that the whole story "will be published in AiG’s peer-reviewed Answers Research Journal."

I think that this was the point that I said, "... wait a minute."  "Peer-reviewed?"  By whom?  By other bible-toting, science-ignoring creationists?  I suppose, to be fair, that's what "peer" means in this context, as in telling a kindergartner that he needs to "interact with his peers" even though they are peers mainly in the sense that they aren't reliably avoiding wetting their pants on a daily basis.

Yet the AiG people do have scientists.  There is the aforementioned Andrew Snelling, who has a Ph.D. in applied geology from the University of Sydney.  Even more mystifying is Georgia Purdom, whose Ph.D. in molecular biology has not stopped her from making bafflingly wacky statements like "From the creation perspective, all bacteria were created 'good,'" presumably only becoming evil pathogens after the Fall of Adam.

And this, I have to admit, is the point when I am overtaken by incredulity.  How could people become sufficiently knowledgeable in geology and molecular biology (respectively) to receive doctorates, and simultaneously hold the belief that the entire universe is 6,000 years old?  And, furthermore, the belief that the science itself supports that view?  The whole thing is a little like my pursuing a medical degree while claiming that diagnosis and treatment should be based on the "Four Humors" model of human health. "I'm sorry, Mrs. Finkwhistle, but your stomach pains are clearly caused by an imbalance between your phlegm and black bile.  We're going to fix it by cutting your arm to let some blood out."

The sad fact, of course, is that like our crop circle "astronomologer" in yesterday's post, these people are serious.  So as much as I'd like to think that Ham and Co. are playing some kind of elaborate prank, not only on us skeptics but upon their tens of thousands of followers in the United States and elsewhere, it appears that they're sincere.  Hard though it is to fathom, they will now have a $1.5 million allosaurus skeleton with which to make their point to the gullible public.  And I can't help but think that Ebenezer the allosaurus would be ashamed if he knew his bones were being used for such a purpose.
Posted by Gordon Bonnet at 2:16 AM