There are times that I think the woo-woos are engaging in an elaborate game of self-parody, just to see how far they can push us skeptics before we realize that it's all a huge joke.

Or at least, I live in that hope, because it's better than the alternative, which is that these people are serious whackjobs.  Take, for example, the case of the astrologer who recently commented on a crop circle that occurred in 2011 near Stonehenge. 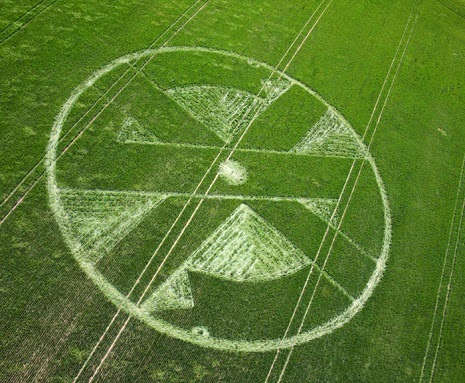 Those of you are are aficionados of punk rock may recognize this as the logo of Crass, a punk rock band formed in the 1970s that was involved in the anarchic/political end of the punk spectrum, and which produced several albums, including the memorable Penis Envy.  For reference, here's their actual logo, courtesy of Wikipedia:

Not much doubt, is there?  Some wag with a taste for punk and way too much free time decided to make a crop circle as an homage to his (or her) favorite band.  As we've seen before, crop circles can be generated in short order as long as you have some kind of device to orient yourself and a piece of plywood with which to flatten the crops.  No other explanation necessary, not that we'd be likely to look for one given that it'd be an odd alien race that would come all the light years to Earth and leave behind a punk rock logo as their only communiqué.

That point, however, apparently flew past astrologer Donna Provancher so quickly that it didn't even ruffle her hair.  Excuse me, though; Provancher isn't an astrologer, she says she's an "astronomologer."  What, exactly, is an "astronomologer," you may be asking?  In her words, "astronomology is the practice of astrology using astronomy to build the chart and supply new insights."

Which doesn't sound that different from astrology, frankly.  It's as if I decided to open a practice doing Tarot card readings and started calling it "Tarothematics" because the Tarot cards have numbers on them, and expected that people should take me more seriously than the ordinary Tarot card readers because of it.

Be that as it may, Provancher was just enthralled by the crop circle, and had a wonderful explanation of what it meant.  None of which, I hasten to say, had anything to do with punk rock.  Here's Provancher's explanation, courtesy of the wonderful site Dangerous Minds:

You know those pictures of the Gods and Goddesses with eight or eighteen or a thousand arms? That’s what we are when we work together. You can tack thousands of pairs of eyes and ears to that image while you’re at it. Nothing escapes our notice.

Roving Astronomologer eyes and ears (thanks again Solar Ophiuchus Raya King—that makes two Gold Stars for you) directed my attention early this morning to a crop circle reported June 20, 2011 near Stonehenge.Crop Circle Connector is calling this area “Stonehenge (1)” whatever that means. I have a Facebook Wall ping out to Philip Peake (visit his blog Thoughtsoftheguru.com) my longtime Friend (with a capital F), Web Host and Webmaster who is from the U.K. Maybe he can tell me where this is in relation to the megaliths. The map wasn’t revealing of that little detail...

She then goes on to explain what the crop circle means, as follows:

—As Above, So Below (opening greeting)

—A double-headed serpent wrapped around one of the axial poles of the planet — we’ll have to assume it’s the poles of the planet since East-West doesn’t have an axial pole. The piece on top (the double-headed serpent) is bolted to the Tau-Cross, so at this point, Raya’s vision of the Staff of Asclepius is partially correct; she just didn’t finish it.

The 2-headed King-snakes I used to see at the San Diego zoo had tails. This one isn’t like that. But then it’s not imitating a snake, it’s picturing a new concept. The new Planetary Caduceus. It needs to be finished. This is something else I haven’t discussed yet but it looks like this is one more Agenda Item on the Table I’ll put this on my To-Do list to discuss.

Well, I don't know about you, but my little heart is just going thumpety-thump in anticipation of more discussion of the "planetary caduceus."  Whatever that is.

All the while I was reading this, I kept thinking... "come on.  When is the other shoe going to drop?  Surely she doesn't think this is really some kind of mystical symbol... like, aliens?  Or Gaea communicating with us?  Or... or...  No, merciful heavens above, she really doesn't realize it's a prank."

Anyhow, I'd like to thank Dangerous Minds for the best laugh I've had in days, and Donna Provancher for inadvertently being the cause.  I guess she's really not engaging in self-parody, as comforting an answer as that would be -- she really does believe what she's saying.  And now, I need to wrap this up -- I need to go study.  Pretty soon I'll be taking my licensing exam, after which I'll be a certified homeopathophysiolomedicopsychic-ologist.

Beat that.
Posted by Gordon Bonnet at 2:18 AM