In the latest from the False Sense Of Security department, we have guys' underwear that contains a mesh of tiny silver threads to protect your privates from electromagnetic radiation.

It's not like this doesn't have precedent, I guess.  When you get a dental x-ray, the technician always drapes your torso with a lead apron to protect the rest of you from being irradiated.  The difference, of course, is that x-rays are high-energy ionizing radiation, while the radiation that Wireless Armour inventor Joseph Perkins is trying to protect us from is low-energy EM radiation in the radio and microwave regions of the spectrum, which has not been shown to cause ill health effects (at least not in the intensity that most of us are exposed to).

Perkins, who in his promotional over at IndieGoGo says he has a background in physics, states that there has been a 59% drop in sperm count in men exposed to the EM radiation from a standard laptop, a number I seriously question -- the studies I've seen haven't shown any such thing, although there is some indication that proximity of the testicles to a cellphone in call mode for an hour can cause a decrease in sperm motility.  A study in Norway of guys working near radio transmitter aerials did show that they had lower than expected fertility, but this is a level of radio wave exposure that most of us never see.  There doesn't seem to be any connection between using a laptop or cellphone in ordinary ways and a drop in sperm count, or even an overall lower fertility level.  I mean, think about it.  Given the ubiquity of laptops and cellphones and so on these days, if they were actually causing this kind of drop in fertility, we'd be seeing a pretty serious crash in the number of pregnancies.

And I don't think that there's any evidence for that.  People, even here in the tech-crazy industrialized world, still seem to be making babies just fine, regardless of what kind of underwear we guys prefer. 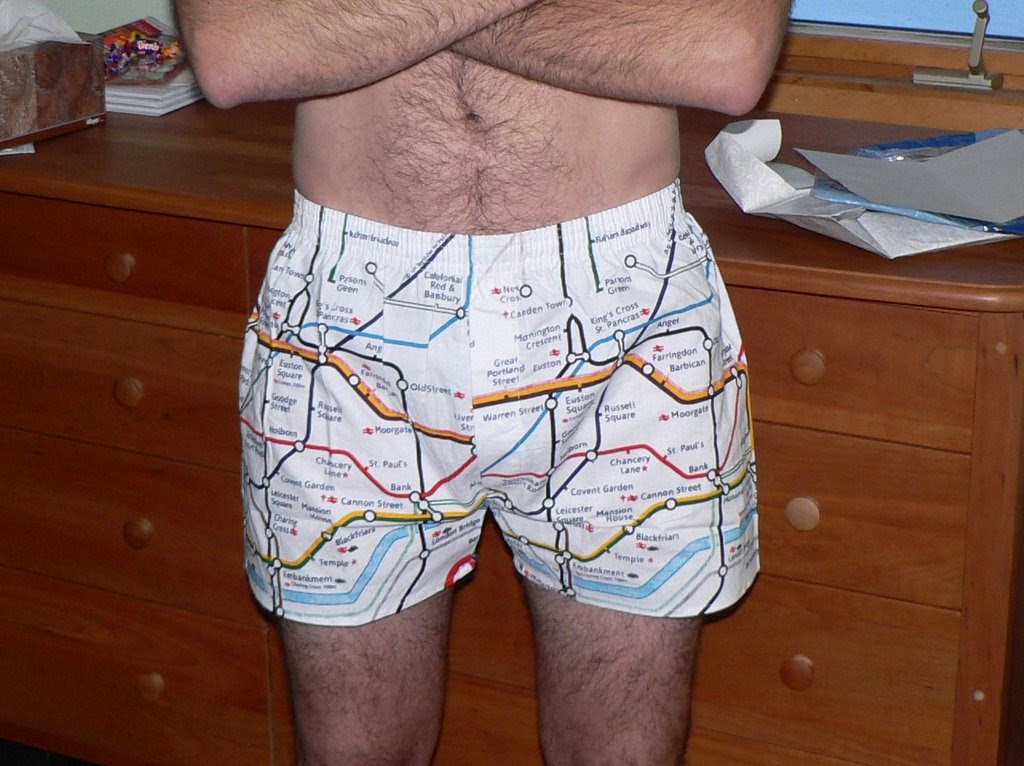 But that doesn't stop Perkins.  His silver-wire-mesh boxer briefs are critical to "keep your troops from getting fried," a phrase that I didn't make up and plays off of every guy's worst nightmare.  The underwear works on the principle of a "Faraday cage," a mesh of conducting wires that blocks electromagnetic radiation, as long as the holes through the mesh are smaller than the wavelength of the radiation.

So Perkins' Wireless Armour would work for radiation in the radio and microwave regions of the spectrum, as advertised.  The problem with the whole concept, though, is that the radiation that strikes our bodies under normal circumstances is of extremely low intensity -- according to Lorne Trottier, writing for The Skeptical Inquirer in 2009, "The photon energy of a cell phone EMF is more than 10 million times weaker than the lowest energy ionizing radiation."  Citing a great many controlled studies (and mentioning a few poorly-controlled ones), The Skeptic's Dictionary states, "(T)he likelihood that our cell phones, microwave ovens, computers, and other electronic devices (cause negative health effects) is miniscule."

There is, of course, the problem with laptops causing skin burns -- not from the EM radiation, but from the fact that the heat from the underside isn't dissipating well.  An article from the National Institute of Health warns against having a laptop against your skin for long periods of time with no heat insulation between it and you.  They describe "(a) 24-year-old man (who) presented with an asymptomatic reddish brown pigmentation on the thighs...  After an extensive work-up, burning caused by use of a laptop was observed...  Burning was induced in 3 days by using laptop for 4 h daily."

But silver mesh boxer briefs aren't going to protect you from heat.  Silver is quite a good heat conductor, so if anything, having silver threads in your underwear would make the problem worse.

That's not to say that Perkins's original claim is wrong, of course.  His Faraday-cage skivvies would protect you from the effect of high-intensity radio or microwave radiation, should you ever be exposed to such.  If you were, for example, standing in front of a high-output radio transmitter, and were wearing your Wireless Armour boxer briefs, your "troops would not fry."  The rest of your body, however, would heat up in the manner of last night's leftovers in the kitchen microwave, until you were piping hot on the inside.

Your junk, however, would remain nice and cool, if that's any consolation.

If you'd like, though, Perkins's IndieGoGo page has a place where you can contribute, and receive your very own pair of anti-EMR underwear.  The price varies between £14 (about $23) for a pair with mesh in the front only,  and £24 (about $32) for "360º protection."  This seems steep, but remember that they do contain woven silver thread, so I guess they're not cheap to manufacture.

The whole thing strikes me as unnecessary, though, and I think I'll stick with my previous three-pairs-for-ten-dollars boxers from J. C. Penney.
Posted by Gordon Bonnet at 4:19 AM