A couple of days ago, I wrote about the fact that Cliven Bundy and his Gang o' Morons out in Nevada were a gauge of something more than just stupidity -- that it was a symptom of the galloping paranoia that has been fostered by alarmist pundits on the extreme right fringe shrieking about how America As We Know It is threatened.  Bundy, and the abortive "ten million strong protest" that conspicuously failed to materialize in Washington D. C. last week, are the leading edge of a worldview that is based in fear.

I had hoped that the collapse of Operation American Spring Epic Fail was due to the fact that most people are sensible, and realized that the self-styled "Patriots" who were organizing the thing are insane.  That, and the fact that the leaders were overestimating their support by 9,999,900 or so, an error that would be analogous to my telling a student that he had a perfect 100 in my class when in fact he had an overall average of 0.0001 percent.

You can see how that kind of glitch could happen.

But it appears that my Panglossian optimism might have been premature.  Chez Pazienza, over at The Daily Banter, has done a little digging on conspiracy websites, and has found that there's another reason that pretty much no one showed up, and it can be summed up in a famous line from The Return of the Jedi: 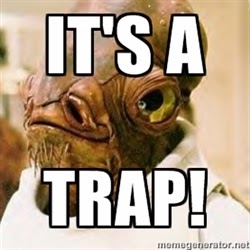 Yup, that's right; these people think that they're so important, so absolutely Public Enemy Number One, that they were walking into a trap -- that in Pazienza's words (which I could not possibly improve on) the powers-that be were planning on "unleashing Obama's jackbooted thugs" who were going to sweep down and arrest all ten million of them while they were together in one place.

Then, it got even weirder.  David Chase Taylor, who's so fucking crazy that even Alex Jones thinks he's nuts, stated that he had word that there'd been a security lockdown because a car was trailing a motorcade carrying President Obama's daughters.  Seems reasonable enough, right?  Well, let's see if you can do a little multiple-choice to guess why Taylor said they ramped up security when that happened:

The answer is (3), of course.  Taylor, who apparently has a single Froot Loop where most of us have a brain, is convinced that True Patriots should protest the fact that it's too dangerous to protest because the government was going to blow itself up to prove how ultra-sneaky and powerful they are, and blame the explosion on people who weren't technically there.

Or something like that.  It's hard to tell, actually.  I read enough of this stuff that I live in fear of the day when eventually some of it starts making sense.  At that point, I should probably just pack it in.  But the upshot of it is, the government is run by brilliant evil Illuminati geniuses who are simultaneously bumbling lunatics who are so stupid that a wingnut like Taylor could see right through them, post about it on the internet, and get away with it.  "Dammit," I can hear President Obama saying.  "Foiled again!  I'd have succeeded this time, if it hadn't been for YouTube!"

It's like a giant layer cake of crazy, sprinkled with nuts.  And only half-baked.

As I mentioned in Monday's post, I'm still uncertain about what the government should do in response to all of this.  On the one hand, we have armed wackos threatening violent revolution, who will admit up front that they're not afraid to shed innocent blood to accomplish their goals.  But on the other hand, to round them up just because they are blustering on YouTube and the r/conspiracy subreddit would probably be challenged on the grounds of free speech.  In the US, it's not a crime to be crazy, fortunately for David Chase Taylor and Alex Jones.  Jones himself has predicted more than once that he'd be arrested or secretly done away with, and yet there he is, still yammering on, week after week -- a better counterargument for his screeching paranoia than any I could come up with.

Anyhow, it'll be interesting to see how all of this unfolds.  My guess is that the "Patriots" who have made actual threats, including the moron who allowed himself to be photographed aiming a gun through two barriers on a highway, will very likely find law enforcement knocking on their doors sooner or later.  As for the rest, they'll probably still keep bleating about Obama and his thugs trying to take away their guns, despite that Obama has been in office for six years now and has yet to try to repeal the Second Amendment.

All I can say is, Mr. President, if you're planning on some kind of Nazi-style socialist power grab, you'd better get a move-on.  Time's a-wastin'.

(Hat tip to Chez Pazienza for today's story -- here's the link again to his piece, which you should all read, because it's awesome.)
Posted by Gordon Bonnet at 2:04 AM