I find it puzzling how few people actually understand weather.

Partly, this puzzlement is because I've always found it completely fascinating.  I spend a lot of time on Weather Underground and the NOAA (National Oceanic and Atmospheric Administration) sites, with the result that I frequently update my wife on the status of weather systems in Nebraska.  (Her stock response: "That's nice, dear.") 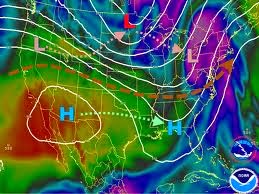 I cannot, for example, fathom how people wouldn't be intensely curious about videos like the recent time-lapse series taken of a supercell system in Wyoming, which all of you should watch right now:


What surprises me is how few people get beyond the "Oh, wow," stage with all of this.  I know that the first time I saw a photograph of a supercell -- which ranks right up there with a dry microburst as the most bizarre weather phenomenon I've ever heard of -- I immediately thought, "What could cause something like that?"  And asking this question led me to all sorts of cool places, like atmospheric convection and adiabatic cooling and evaporative cooling and wind shear.

Now I realize that this stuff gets complex fast.  To quote Garrison Keillor, "Intelligence is like four-wheel drive.  It enables you to get stuck in even more remote places."

But it's still awesome.  And weather is, after all, ubiquitous.  How you could be immersed in something all the time, and not want to know how it works, is mystifying to me.

All of this comes up because of two stories this week, both of which never would have been more than meteorological curiosities if it weren't for the fact that people tend not to know much about the weather phenomena that surround them all day, every day.  The first, which involves an admittedly odd cloud pattern called a "hole-punch cloud," or "fallstreak hole," had people speculating that the seeming "hole in the sky" (check the link for photographs) was one of the following:

Of course, all of the furor was founded on the fact that hole-punch clouds have a perfectly natural explanation, usually that an airplane (or, much less commonly, a meteor) disrupted what was uniform cloud cover, leaving a temporary hole through the clouds.

No Matrix, wormhole, or angels required.

Second, we had a story from the wonderful site Doubtful News that blamed the unusual (and destructive) rains that have hit Serbia in the past week on none other than...

Yes, we have not seen the last of the High-frequency Active Auroral Research Program, that favorite bête noire of conspiracy theorists -- despite the fact that HAARP closed last year and is currently being dismantled.  It's been blamed for everything from tsunamis to earthquakes to tornadoes to hurricanes, and now... floods:


Many of my contacts in Serbia have spoken of whispered accusations that the unprecedented flooding and unusual weather patterns in the last few years have something to do with the US’s HAARP system. According to one website: “A Serbian journalist was advised not to write about a HAARP installation near Belgrade. After series of texts regarding HAARP antenna system near Barajevo (Belgrade municipality) and application of this ELF system in Serbia the journalist of newspaper Pravda has received a phone call on Monday evening around 10PM from unlisted phone number. The voice on other side of the line gave the journalist a “friendly advice” to stop writing on HAARP...”

Would it be surprising if the US, after unleashing neo-Nazis in Ukraine, unleashed flooding in Serbia? Those in the know would probably say no.

And there's a reason for that, you know?  Like the fact that HAARP couldn't even cause floods when it was running, much less now, when it isn't?

Of course, every time there's a catastrophe, people want an Explanation, not just an explanation.  It's not enough just to talk about weather systems and frontal boundaries and atmospheric moisture; there's got to be more.

But dammit, it'd be nice if people would start with the weather systems and frontal boundaries, rather than starting from ignorance and going downhill from there.  If you want to comment intelligently on anything, it helps to know some of the science behind it first.

Okay, I'll calm down, now.  Back to my happy place.  NOAA.  I see that there's a low-pressure center over Manitoba at the moment.  Isn't that cool?  Isn't it?