It was the best of times...

At least the young-earth creationists just think I'm working for Satan, a charge that I can understand, considering their view of things.  Sure, we don't accept the same ground rules for proof (evidence versus revelation); sure, we have different conclusions regarding where you can apply the laws of scientific inference (damn near everywhere versus only places where it doesn't conflict with Holy Writ).

But at least we can talk.  The conspiracy theorists, you can't even have a civil discussion with.  They accuse you of either being stupid or else working for evil humans, both of which are in my opinion worse than working for Satan because stupidity and evil humans actually exist.  The worst part, though, is that they pretend to accept the principles of rational argument, but then when it comes down to the point, they don't, really.  You can bring out the best-researched study about the efficacy and safety of vaccines, the most convincing argument that 9/11 and Sandy Hook were not "inside jobs" or "false flags," the most persuasive evidence out there that HAARP has nothing to do with raising tsunamis or causing earthquakes.

And where does it get you?  They just write you off as a dupe or a shill.  It's the ultimate example of the False Dilemma Fallacy; if you don't agree with us, you're one of.... Them.

The problem in this country has gotten so bad that Kurt Eichenwald did a big piece in Vanity Fair on the topic this week, and you all should read it.  In fact, everyone in the civilized world should read it, because it's brilliant, even though it's depressing.  I'll give you a brief passage from it, but then I want you to go to the link and read the whole thing:


(W)e have become scientific and political illiterates, and no nation can survive on a bedrock of such delusional stupidity.  Of course, the 26 percent (or more) won’t believe me, if they manage to read this.  I’ll just be deemed an “elitist” for daring to suggest that demon science and data, rather than ridiculous conspiracy theories, should be used to judge reality.  So, it may be a losing battle, but we should all try.  I don’t want to be forced, someday, to stand by as the rest of the world renames our nation “America the Ignorant.”

It's a bit of a coincidence that I should come across this when I did, because it came on the heels of another article, one sent to me by a loyal reader of Skeptophilia, that details one of the most pervasive and bizarre conspiracy theories out there: that the US government in general, and FEMA (the Federal Emergency Management Agency) in particular, are laying plans to kill us all.

Apparently, the whole thing is supposed to be carried out via guillotine, which is at least creative, if messy.

And here, we find out what they have in store for us:


Code ICD 9 E 978 Makes Execution by Guillotine Legal Under Obamacare.  The specific code sent to me will make any American’s hair stand up on the back of their neck.  The code is ICD 9 E 978.  After reading this code I decided that it was my duty to investigate further and get to the bottom of why we have a medical code in the United States for “Legal Execution.”  The Jesuits are behind most conspiracies and this one is no different...  Execution by Guillotine is painless.

And I'm thinking: what the fuck does Obamacare have to do with this?  Was that just something extra to throw in, along with the Jesuits for some reason, the way that the anti-GMO crowd will throw in the name "Monsanto" as a stand-in for Hitler?

At least they tossed us the cheerful tidbit that getting your head sliced off is painless.  I'm relieved, actually, considering what other methods they could have chosen.

And any good news at all is reassuring, considering what's been going on:


Not too long ago, I received word that the information I received regarding the guillotines was not only accurate, it was actually being lobbied in Washington DC to get them legalized for governmental use!  The states I mentioned on my “current events” page a few years back was [sic] in fact GEORGIA & MONTANA as the recipients of these guillotines.  The information I had received was that 15,000 or 30,000 guillotines had been shipped to Georgia as well as Montana for safe keeping until such a time as they are needed.

But yes, they say, FEMA is "stockpiling guillotines," a phrase that I find to be funny in a gruesome sort of fashion.  Why would they need a "stockpile?"  It's not like you can only use them once, or anything.  During the French Revolution, Robespierre and his Band of Merry Men seemed to do quite well with only a few, running pretty much round the clock. 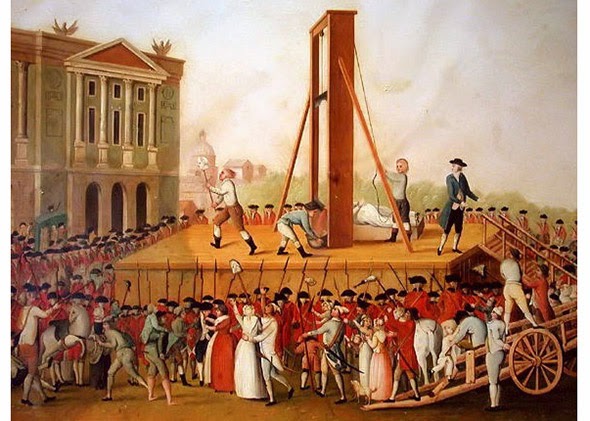 But the level of pretzel logic crosses some kind of line into "really scary" later in the article, wherein we read:


When the Democratic Underground reports that retired FBI agent Ted Gunderson tells a gathering of antigovernment “Patriots” that the federal government has set up 1,000 internment camps across the country and is storing 30,000 guillotines and a half-million caskets in Atlanta.  They’re there for the day the government finally declares martial law and moves in to round up or kill American dissenters, he says. “They’re going to keep track of all of us, folks,” Gunderson warns.

And that plays a nice little glissando on our fear-harp, doesn't it?  "They" will keep track of us.  The "dissenters" will be rounded up and done away with.  Using secret guillotines.  And our bodies will end up in secret caskets.  And worst of all, this will be done by the people who are supposed to be on our side.

Now, I hasten to add that I'm reasonably certain that none of it is true.  I'd be willing to lay money on the fact that there are no guillotines, no caskets, and that FEMA is your usual rather inept, bumbling excuse for a government agency, with no particular ill intent.  But as I said earlier; you can't convince the conspiracy theorists of that.  The fear is too high for them to admit that they could be wrong; it would require such a drastic revision of their entire worldview, their whole raison d'être, that even the thought must be painful.

Better to continue considering me a dupe, or worse, a pawn in the disinformation network.

It's tempting, sometimes, to give up trying to convince them.  The odds of overcoming such galloping paranoia seem slim.  But I agree with Eichenwald; and it seems fitting to end with another quote from him.


So, should you listen to me?  Of course not.  I’m not a scientist either.  But there is plenty of valid research, easily accessible through Google, that lays out the trends and issues surrounding the safety of vaccines and the changes in climate we experience.  But Americans, based on the PPP poll, would rather listen to celebrities.  Bottom line here is that American ignorance isn’t always just funny—it can be downright dangerous.