In the latest from the Quick Comeuppance department, we have news that only three days after the Supreme Court sided 5-4 with the town of Greece, New York in supporting their right to open town meetings with a prayer, a man in Deerfield Beach, Florida has put in his official request to open a city commission meeting with a prayer...

My first reaction upon reading this was, and I quote, "BA HA HA HA HA HA HA HA HA."  Surely the Supreme Court justices must have realized what a can of worms they were opening.  Whatever your opinion about whether the United States was a Christian nation at its founding, it's pretty certain that it's not any more -- or at least, Christianity isn't the unified front it once was.  Unbelievers now account for one out of every five Americans, and then there are all of the minority religions, not to mention the fact that Christianity itself has shattered into hundreds of little sects that barely agree with each other on anything but the basics, and sometimes not even that.  So it comes down to the fact that separation of church and state protects everyone; it protects me from being forced to sit through a prayer I don't believe in, and it protects Christians from having to sit through a prayer praising Lucifer.

Which, of course, is the point that Chaz Stevens is trying to make with his letter to the City of Deerfield Beach, which reads as follows:

With the recent US Supreme Court ruling allowing “prayer before Commission meetings” and seeking the rights granted to others, I hereby am requesting I be allowed to open a Commission meeting praying for my God, my divine spirit, my Dude in Charge.

Be advised, I am a Satanist.

Let me know when this is good for you.

Chaz Stevens, Calling in from Ring 6 of Dante’s Inferno

Stevens is the same guy who responded to Florida Governor Rick Scott's support of a city-sponsored nativity scene with a demand to place next to it an eight-foot-tall Festivus pole made of Pabst Blue Ribbon cans.

Then, there is the group who is constructing a ten-foot-tall statue of Baphomet to be placed at the Oklahoma Statehouse -- after State Representative Mike Ritze pushed through a request by a conservative Christian group to erect a monument of the Ten Commandments.  The legislators aren't going to take that lying down, to judge by Representative Earl Sears's response upon hearing of the plans for the statue: "This is a faith-based nation and a faith-based state.   I think it is very offensive they would contemplate or even have this kind of conversation."

So breaking down the wall between church and state is apparently just fine, as long as it's the right church. 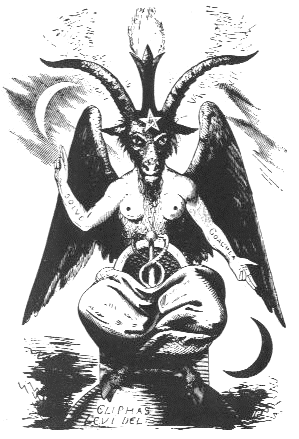 Kind of gives new meaning to the phrase, "Be Careful What You Wish For," doesn't it?

What gets me about all of this stuff, though, is the one question you so seldom hear anyone ask: why do people want to have a mandated prayer before a government meeting?  Or, for that matter, a government-funded nativity scene?  No one is saying you can't pray privately all you want, whenever and wherever you want, or have a nativity scene in your own personal yard so garish that the lights blind the drivers of nearby cars.  But what earthly purpose can there be to have such religious gestures carry the government's imprimatur?

Except, of course, to rub it in the faces of people who don't believe.  That, I think, is the tacit goal here -- to say to us atheists (and, probably, to adherents to other religions as well), "Ha ha.  The United States is too a Christian nation.  See?  We showed you, didn't we?"

The teensy problem with this, though, is that by so doing, the Christians who are making such an issue of this aren't even following the precepts of their own holy book.  I turn your attention to Matthew 6:5-6, wherein we read, "And when thou prayest, thou shalt not be as the hypocrites are: for they love to pray standing in the synagogues and in the corners of the streets, that they may be seen of men.  Verily I say unto you, They have their reward.  But thou, when thou prayest, enter into thy closet, and when thou hast shut thy door, pray to thy Father which is in secret; and thy Father which seeth in secret shall reward thee openly."

Mmm-hmm.  Wonder what Justice Kennedy, who wrote the majority decision, would say in response to that?  Not much, is my guess.  Because take a look what he actually did write: "To hold that invocations must be nonsectarian would force the legislatures that sponsor prayers and the courts that are asked to decide these cases to act as supervisors and censors of religious speech, a rule that would involve government in religious matters to a far greater degree than is the case under the town’s current practice of neither editing or approving prayers in advance nor criticizing their content after the fact."

Righty-o.  Well done.  I will be looking forward to hearing how the City Commission of Deerfield Beach likes starting their meetings with a prayer to Satan.  And to anyone who feels so inclined, I would be happy to help you write a nice invocation of the Flying Spaghetti Monster to use at whatever public meeting you'd like.