People send me the oddest links.

In just the last few days, I've received links to the following:

It's flattering that people think to send me stuff, although the last one did make me wonder why anyone would spend enough time looking at his dog's ass to come to that conclusion.

But the most bizarre ones usually have some kind of vague message attached, such as "I think you'll find this interesting" or "You should read this" or "Maybe you should think about this."  Such as the one that came yesterday, in an email from a stranger, with the message, "I know you won't be able to handle THIS."

Well, I don't know about "handle" it, but given my 'satiable curiosity, I had to click on it.  And I spent the next half-hour perusing "Are UFOs Macroscaled Quantum Effects?" with my jaw hanging slightly open.

The website certainly is... um, interesting.  It starts off with a bang:


In this post I am asking readers to determine for themselves if a theory I have synthesized matches the characteristics of Unidentified Atmospheric Phenomenon.  This theory has been in formulation over a decade in various differing observations but never as a coherent totality.  Is the UFO / UAP phenomenon, a macro-scaled quantum event, a result of the entanglement of matter and energy?

We know that leading edge science is discovering new relationships all around us.  This concept may or may not explain the reasons why this phenomenon is both transient (very short in duration) as well as appearing in "waves" of activity.

What exactly does a "macro-scaled quantum effect" mean?  Quantum effects are by definition tiny.  Check out the first line from Wikipedia's page on quantum mechanics if you don't believe me:


Quantum mechanics (QM – also known as quantum physics, or quantum theory) is a branch of physics which deals with physical phenomena at nanoscopic scales where the action is on the order of the Planck constant.

So saying a "macro-scaled quantum effect" is a little like saying a "really huge microscopic object."

But how small are we talking about, here?  Physicists define the Planck scale, which is the scale of time and space at which quantum effects supersede ordinary (Newtonian) physics, as involving time intervals of about 5.4 x 10−44 seconds and lengths of about 1.6 x 10−35 meters.

That is to say, not the kind of thing you can observe on a daily basis, even if you have a fast camera or a really excellent magnifying glass.

But this doesn't stop the author, who plows on ahead as if what he said actually had any connection to reality:


Quantum entanglement is a physical phenomenon that occurs when pairs or groups of particles are generated or interact in ways such that the quantum state of each particle cannot be described independently – instead, a quantum state may be given for the system as a whole.  One approach to the UAP / UFO enigma is to consider it to be a transitory quantum effect caused by the interaction of several fields that represent a system as a whole. The word "quantum" comes from the Latin "quantus", for "how much" or how many interactions there are as derived from the original meaning of measurement.

I have tried as best I can to make it easy to read and understandable. I am expressing the very strong suspicion that UAP is a previously unidentified form of transitional energy that arises and is in a feedback loop in conjunction with both an energetic environment and the aggregate sum of the human mind as a energy field. One field is entangled in another.

I think this was the point when my eyes started glazing over.


Specifically, electromagnetic energy.  Students of science are taught that energy is transcribed as information.

Is there an intersection wherein energy and atomic structure as well as molecular structure are influenced or steered by the energy of an information field?  A good example is the mind \ brain relationship.  Does this occur elsewhere?  Apparently it does in a macro-scaled manner as demonstrated by scientists through a quantum entanglement effect.  In other words, our natural environment is not a matter of distinct or discrete divisions between matter and energy.  This intersection includes various interacting energy fields.  One field is our atmosphere, another is the human energy field, both of which contain information as energy.

Science accepts as foundational that all permutations of matter whether this matter has physicality or not has as one of the characteristics of their manifestation is energy.

*momentary pause to recover my equilibrium*

Okay, better now.  And I have only one response to all of this, which is summed up in the following picture: 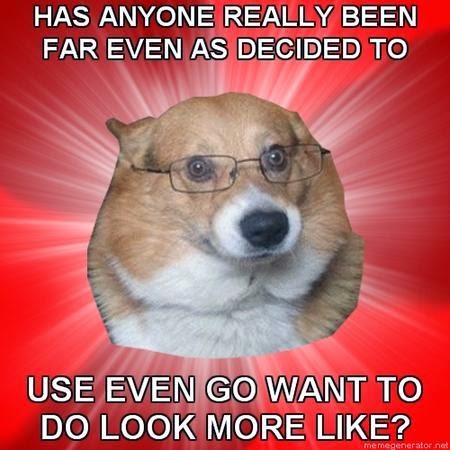 What gets me about sites like this is not that some oddball has a blog.  Oddballs do that, after all, present company very much included.  It's that this guy seems to write along, using all sorts of scientific terminology, with no particular realization that he hasn't the foggiest idea what it means.  Whatever else you can say about me, I generally am aware when I'm ignorant about a topic, and as a result, I refrain from writing about it (which is why I so infrequently get onto the topic of politics).

But here's this dude, blithely making statements like, "Anyone can easily observe our atmosphere is energetic and that radiant energy from our solar star is transcribed into molecular matter through it’s [sic] medium," and evidently expecting all of us science-y types to say, "Bravo!" and nod in agreement.

Anyhow.  To whoever sent me the link, I can only say, "Thanks?" with a slight tilt of one eyebrow.  At least I got a post out of it, which is all to the good.  I'm not sure if that constitutes "handling" the information in the website, but it works for me.  And now I think I'm going to go permutate the energetic liquid in my coffee cup into my mouth, so I can actuate some macro-scaled quantum effects in my pre-frontal cortex when I get to school.  I don't know what my students would do if I was too addled to transcribe discrete radiant energy information onto my white board.  They'd be really disappointed, is my guess.
Posted by Gordon Bonnet at 2:20 AM