Squatch of the day

In yesterday's post, we took a look at the latest from the world of extraterrestrial enthusiasts; today, we'll do the same for another topic we haven't visited in a while: 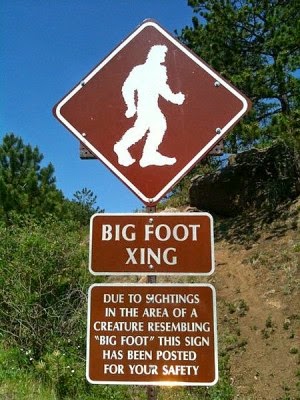 Yup, Skeptophilia has been quiet for a while on the subject of our giant hairy cousins.  Which is a shame, because cryptozoology was kind of how I got into all of this skepticism stuff.  I've had a thing for creepy cryptids since I was a kid.  All I can say is, however cheesy Finding Bigfoot is, if that show had been on when I was a teenager, I would not have missed an episode.

Of course, the same would have been true for Ghost Hunters and Scariest Places on Earth and Most Haunted and The Unexplained and probably even Destination: Truth.

Let's just say that I have learned some discernment as I have matured.

Be that as it may, we've had a busy couple of weeks in the field of Yetiology.  So let's take a look at what we've missed while we were focusing on such trivia as educational policy and the role of religion in the public sphere.

First, from British Columbia, we have a story about a hiker who took a video of an alleged Sasquatch.  The video, which is available from YouTube, I append here:


The hiker, who narrates the video, comments, "This is the middle of absolutely nowhere...  If that's human why would you walk up that ridge or that snow line?  Why would he not just go straight down?...  Good thing we brought beers.  Maybe we can lure him over here. I don't know how high we are, but we're probably close to 7,000 feet and this guy's just scampering up snow lines like it's no big deal."

He goes to significant lengths to point out that it is absolutely, totally remote, the middle of nowhere, but doesn't seem to recognize that it can't be all that remote, because after all, they're there.  And brought along beer.  I used to backcountry camp -- and I know from experience that if you are heading to a really remote place, that requires a long, arduous hike, you don't bring along unnecessary weight.  If they brought beer, then they were clearly close enough to civilization there could have been other hikers out there.

Or bears.  Or whatever.  Because the biggest problem is, this image is so tiny that there's no way to tell what it is.  It's not even a Blobsquatch.  It's a Dotsquatch.  Maybe this is the fabled wild hominid of the Northwest, but you certainly couldn't be sure from this video.


Even further out in left field is something from the Discovery channel, which has joined the History channel and Animal Planet in devoting themselves almost entirely to pseudoscientific gobbledygook. But they outdid themselves last week with a press release announcing an upcoming two-hour special about the infamous Dyatlov Pass Incident.

Loyal readers of Skeptophilia may remember that I did a post about this about two years ago, to which I direct you if you're curious about details.  But for our purposes here, it suffices to say that it centers around the mysterious deaths of nine experienced backcountry skiers in the Ural Mountains of Russia back in 1959.

It's an odd set of circumstances, and in my mind has never been adequately explained, although there are some compelling hypotheses about what may have caused their deaths.  But Discovery has added a hypothesis of their own to the list, although instead of "compelling" it is more "ridiculous:"

The Dyatlov Pass skiers were killed by wild Yetis.

I'm not making this up.  Here's the relevant paragraph of the press release:


RUSSIAN YETI: THE KILLER LIVES, a 2-hour special airing Sunday, June 1 at 9 PM ET/PT on the Discovery Channel, follows Mike [Libecki] as he traces the clues and gathers compelling evidence that suggests the students’ deaths could be the work of a creature thought only to exist in folklore.

Oh, hell, if you're going to make shit up, why not go all the way?  I think they should make a two-hour special about how the Dyatlov Pass skiers were killed by the Lovecraftian Elder Gods because some Russian necromancer wannabe opened up a gateway to Yog Sothoth.  The one hiker with the major chest injuries had had his heart sucked out by a Shoggoth.

Makes about as much sense.


Speaking of "not making sense," just last week we had a new proposal out there to explain why Bigfoot photos are all blurry.  It's not because they're fakes, or vague images of something sort-of-Bigfoot-like (i.e. an example of cryptozoological pareidolia).

It's because Bigfoot himself is blurry.

You probably think I'm making this up, but over at Occult View, this has been thrown out there as a serious suggestion in a post called "Bigfoot as a Blurry Vibration That Lives in the Forest."  A short passage should suffice to give you the flavor:


These sightings are not hominids, but something all together different. These Bigfoot are vibrations that live in the forest. Call them blurry beings.

When these blurry vibrations are spotted, we see something that really doesn’t make sense. Our brains then fill in the blanks; our minds complete the details. We see a creature that looks natural, but if we took a picture of it at the same time it would appear only as a blur or a fuzzy image.

There really hasn’t been a clear photo of Bigfoot (that I assume wasn’t a hoax). But there have been photos of these blurs, these dark shapes. If I am correct, we’ll never get a clear picture of the semi-rural Bigfoot. Yet it might be worth studying these images of dark shapes and see if we can learn something from them. These blurry images might provide clues to the true nature of the vibrations that live in the forest.

What does it even mean to say that something is a "living vibration?"  I'm assuming that the author is using the term in the usual hand-waving way that woo-woos do -- like the mystics saying that humans are "energy field vibrations," even though I doubt they could define the words "energy" and "field" if I held them at gunpoint.  So we won't press any further with this, except to say that anyone who thinks this is a rational explanation is a little blurry around the edges himself.


To end on an entertaining note, we have another video clip, this one from a gentleman named Larry Surface, that he claims is a recording of Bigfoot vocalizations from Ohio.  Take a listen:

Okay, I know that there's a possibility (slim, in my opinion) that these are really Bigfoot sounds.  But human perception being what it is, if someone tells you what you're hearing -- subtitles it, even -- you are way more likely to hear "hondabay hondabay hondabay" than you are to hear random animal vocalizations.  Consider how the whole "backmasking" thing works -- the conspiracy guys always tell you ahead of time what message has been inserted backwards into the song or speech you're listening to.  Then, when you listen to it backwards... lo and behold... there it is.

So me, I'm not convinced.  I've heard enough bizarre vocalizations from perfectly ordinary non-cryptids -- animals like foxes and raccoons and skunks and barred owls can make some really peculiar, unearthly noises.  (So if you really want to find out what the fox says, you can listen to hundreds of examples on YouTube.  You will not, for the record, find one recording of a fox saying "gering-a-ding-ding-ding-ding-ding.")

Anyway, that's the news from the cryptozoology world.  Dotsquatch, Blursquatch, Russian Skier-Killers, and the strange language of the Ohio Bigfoot.  All in all, about what we'd expect, given the level of evidence that has been heretofore amassed.  So until next time, I'll sign off with a cheerful "Hamit mahamit whoop ma oh," and I hope you feel likewise.