Tales of the Black Knight

New from the One Thing Leads To Another department, yesterday's post about crazy stories growing by accretion prompted an email from a loyal reader of Skeptophilia asking me if I'd heard about the "Black Knight satellite."

At first, I thought it was some kind of obscure Monty Python reference, and asked if I was going to end up getting my arms and legs chopped off.  He said no, it had nothing to do with Monty Python, and expressed surprise that I hadn't heard of it, and provided me with several relevant links to explore.  Once again proving that trying to sound the bottom of the ocean of wacky bullshit ideas out there is an exercise in futility.  No matter how much nutty stuff I write about on a daily basis, there is always more out there.

So pop some popcorn, sit back in your recliner, and let me tell you about what I learned today in school.

Ham radio buffs know about the phenomenon called a long-delayed echo, which is when a radio transmission is bounced back to its origin a significant amount of time after it is sent.  There is, of course, a completely natural explanation; that the signal becomes trapped between two layers of the ionosphere, and travels around the Earth many times until it finally "falls out" through a gap in the bottom layer, to be picked up by receivers on the Earth's surface.  This idea isn't proven -- and there are some examples of LDEs that don't seem to be explainable through this mechanism -- but it's thought that this probably accounts for the majority of them.

Okay, so that's the first piece of the puzzle.  Add to that the radio signals that Nikola Tesla picked up, that I wrote about only last week.  As I pointed out in that post, there's something about Tesla's name that ups the woo-woo quotient significantly, so we'll just leave that there.

Next, put in a report from February 1960 from the United States Navy, of a "dark, tumbling object" that was showing up on radar.  It had an odd and highly eccentric orbit -- inclined at 79° from the equator, with a period of 104.5 minutes, an apogee of 1,728 kilometers, and a perigee of 216 kilometers.  Mysterious -- until the Navy stated that it was a casing from the Discoverer VIII satellite, which had been lost while following a similar strange orbit.

Of course, that's what they would say.  *cue scary music*

That brings us to 1973, when Scottish science fiction writer Duncan Lunan revealed that he had been looking through old radio transmission logs from Norway and the Netherlands from the 1920s, and had come across a radio message in a LDE that could be translated as follows:


Start here. Our home is Upsilon Boötes, which is a double star.  We live on the sixth planet of seven, coming from the sun, which is the larger of the two.  Our sixth planet has one moon.  Our fourth planet has three.  Our first and third planets each have one.  Our probe is in the position of Arcturus, known in our maps.

The report evidently carried enough weight that it was published in Spaceflight, the journal of the British Interplanetary Society, and eventually in Time magazine and on the CBS Evening News.   Lunan later withdrew his support for the claim, stating three years later that the evidence didn't support it -- once again making the conspiracy theorists wiggle their eyebrows significantly.  How could a message have been translated, resulting in such precise information, and then later the man who broke the story simply backs off from it?

Someone must have... gotten to him.  *music gets even scarier*

Of course, there's the problem that Lunan is still alive and kicking, and still periodically churns out weird claims (such as his stating that the "Green Children of Woolpit" were alien children who were transported to Earth by a malfunction in a Star Trek-style matter transporter.  But that's a story for another post).  So if They got to Lunan, they didn't do a very thorough job of silencing him.

But even that's not all.  We have an incident in 1998, where an object photographed during the STS-88 space shuttle mission was alleged to be the same object that the Navy had seen on radar in 1960, even though NASA said that it was just a piece of a thermal blanket that had been lost during an EVA "spacewalk."

But that was it.  By this time, the accretion had reached a critical mass.  All of this stuff, people said, must be connected.  You can't just have random echo messages, lost satellite casings and thermal blankets, allegations of alien messages, and the name "Nikola Tesla," and not have it mean something.

So what does it mean, you're probably asking?  Here we go.  You ready?

It's a 13,000 year old extraterrestrial Mayan spacecraft called the "Black Knight satellite" that is still up there and relaying messages back to its home base on Upsilon Boötes.

At this point in my research for this post, I gave a quizzical head-tilt look at my computer, rather the way my dog looks at me when I try to explain a complex concept to her, such as why she can't bring the squirrel she just killed inside.  "Extraterrestrial Mayans?" I said to my computer.  "The Mayans aren't extraterrestrials.  They're just... people."

So I began to investigate this, and I found out how wrong I was.  There was this Mayan dude, K'inich Janaab' Pakal, who had his own spaceship, if you can imagine.  Here's a picture of him flying in it, a drawing of the design from the lid of his sarcophagus: 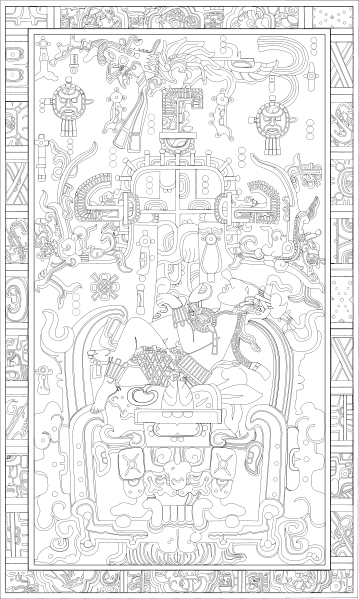 But who says that this is a guy in a spacecraft?  Who says it's not just a Mayan dude leaning back in some kind of Mesoamerican easy chair?

Yes, the whole thing leads us to none other than the venerable Swiss author of Chariots of the Gods?, a book that reads like a bible of Ancient Alien Wingnuttery.  The guy who Giorgio Tsoukalos and the rest of the raving wackmobiles on the This Really Has Nothing To Do With History Channel consider to be nearly a god himself.

So here we have another good example of crackpot idea accretion, not to mention an illustration of the fact that if you could get Erich von Däniken, Alex Jones, and The Weekly World News to shut the hell up, the world would be a significantly less interesting but a significantly saner place.

Anyhow, there it is: another nutball claim that I hadn't heard of.  Once again, a hat tip to the reader who sent it along -- it was a fun bunch of threads to follow, although I must say that the headdesk I did when I found out that von Däniken was involved is going to leave significant bruise.
Posted by Gordon Bonnet at 2:20 AM