Bully (v.) -- to use superior strength or influence to intimidate someone who is in a weaker position of power, typically to force him or her to do what one wants.

There.  I just thought we could clarify that from the get-go, because there are evidently people who need a refresher on the definition of the word.  I'm thinking in particular of Buddy Smith, executive vice president of the American Family Association, who apparently doesn't get it -- especially the "superior strength or influence" part.

Smith showed evidence of his poor understanding of simple English words last week, because of a discrimination issue in (surprise!) Mississippi.  You probably have heard that a few weeks ago Mississippi governor Phil Bryant signed into law a bill that allowed business owners to refuse service to LGBT individuals on the basis of "freedom of religion" (prejudice and bigotry evidently being constitutionally protected rights, or something).  Well, besides the challenges that the bill will rightfully face in the courts, fair-minded shop owners came up with a tactic of their own; to tell LGBT individuals that they were welcome in their shops.  If other stores wanted to lose business, that was fine, but they were willing to serve anyone, regardless of race, religion, or sexual orientation.

So these stickers started to appear in business windows across the state: 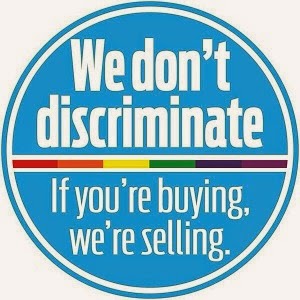 Well, far be it from the American Family Association to take such a stance lying down.  Nosiree.  If you won't stand by us in discriminating against gays and lesbians, well... well...

You must be a bully.

I'm not making this up.  Smith said:


It’s not really a buying campaign, but it’s a bully campaign.  And it’s being carried out by radical homosexual activists who intend to trample the freedom of Christians to live according to the dictates of scripture.

They don’t want to hear that homosexuality is sinful behavior — and they wish to silence Christians and the church who dare to believe this truth.

And as for the shopkeepers who put the stickers in their windows, Smith has the following to say: "If you do that, you are agreeing with these businesses that Christians no longer have the freedom to live out the dictates of their Christian faith and conscience."

Right.  Because selling a gay man a Snapple is exactly the same as saying that Christians have no right to live by the rules of their faith.

The choice of the word "bully" is especially trenchant in this context, because as a high school teacher, I see instances of bullying with sorry regularity.  And I can say that in my 27 year career, the single most bullied group of teenagers I have seen has been gays and lesbians.  Far from being (in the words of the definition) "(of) superior strength and influence," LGBT teens are picked on, discriminated against, and teased, and as a result have one of the highest rates of suicide attempts of any demographic in the United States.

Then there's the issue of the sticker campaign being an attempt to "trample the freedom of Christians."  The fact is, of course, is that no one is trying to tell Christians they have to be gay; what they're saying is that you can't discriminate against other people because they're gay.  Christians have every right to think that being gay is sinful, and that gays are going to be condemned to the fiery furnace to be tortured for all eternity by the God of Love.  Christians can choose to eat meat on Fridays, or not, or drink alcohol, or not, or get a divorce, or not.  Hell, they can decide that god wants them to superglue feathers to their face and cluck like a chicken all day if they want to.

What they are not allowed to do is to refuse service to people who choose not to cluck along with them.

What always gets me is that these people don't seem to have any sense that what they are doing is precisely the same thing that was done to African Americans by the Jim Crow laws, and in a previous generation, what was done to Chinese immigrants by the Chinese Exclusion Act.  Each time, there were demonstrations against the practice of legislating bigotry, and each time, the government finally caved in and halted it (at least by law; no one is under any illusion that it halted the prejudice itself).  The phrase "ending up on the wrong side of history" comes up frequently in these discussions, but people like Smith don't seem to see the parallels.

They are too busy fretting about what consenting adults do in their bedrooms than they are living by the words that Jesus said that even we atheists can agree on -- "Love thy neighbor as thyself," and "Judge not, that ye be not judged.  For with what judgment ye judge, ye shall be judged: and with what measure ye mete, it shall be measured to you again.  And why beholdest thou the mote that is in thy brother's eye, but considerest not the beam that is in thine own eye?  Or how wilt thou say to thy brother, Let me pull out the mote out of thine eye; and, behold, a beam is in thine own eye?  Thou hypocrite, first cast out the beam out of thine own eye; and then shalt thou see clearly to cast out the mote out of thy brother's eye."

Despite all of this, I still have the feeling that in general, we're headed in the right direction as a nation.  At least this kind of thing is making the news; thirty years ago, no one would have even considered this newsworthy, and most LGBT people were still safely in the closet.

Thirty years before that, there were still widespread lynchings and beatings of African Americans in the Deep South.

Progress is incremental, and quicker in some places than in others.  But progress is still being made, despite the efforts of people like Buddy Smith and his pals in the American Family Association to turn the United States into a Christian version of Iran.  We are not a theocracy -- which means that each of you is free to follow whatever religion you want, or none at all.

Other than that -- as my dad used to say, your rights end where my nose begins.  And if you are open for business, you have no right to refuse me service based on my skin color, hair color, religion, ethnic origin -- or sexual orientation.
Posted by Gordon Bonnet at 2:16 AM