Poe's Law has claimed another victim.

Well, more than one.  Lots more than one, to judge by Facebook and Twitter over the last couple of days.  This particular iteration of the rule that any sufficiently well-done satire is indistinguishable from the real thing comes at the hands of The National Report, which shares the stage with The Onion as a hysterically funny source for completely fake news.

This time, The National Report has taken aim at the solar power industry with a stunning exposé called "Solar Panels Drain the Sun's Energy, Experts Say."  In the article, we find out about a study done at the Wyoming Institute of Technology that showed that solar panels suck energy from the sun in the fashion of giant leeches:


Scientists at the Wyoming Institute of Technology, a privately-owned think tank located in Cheyenne, Wyoming, discovered that energy radiated from the sun isn’t merely captured in solar panels, but that energy is directly physically drawn from the sun by those panels, in a process they refer to as "forced photovoltaic drainage."

"Put into laymen’s terms, the solar panels capture the sun’s energy, but pull on the sun over time, forcing more energy to be released than the sun is actually producing," WIT claims in a scientific white paper published on Wednesday.  "Imagine a waterfall, dumping water.  But you aren’t catching the water in buckets, but rather sucking it in with a vacuum cleaner.  Eventually, you’re going to suck in so much water that you drain the river above that waterfall completely."

WIT is adamant that there’s no immediate danger, however.  "Currently, solar panels are an energy niche, and do not pose a serious risk to the sun.  But if we converted our grids to solar energy in a big way, with panels on domestic homes and commercial businesses, and paving our parking lots with panels, we’d start seeing very serious problems over time.  If every home in the world had solar panels on their roofs, global temperatures would drop by as much as thirty degrees over twenty years, and the sun could die out within three hundred to four hundred years."

And to make the article even funnier, the study was supposedly commissioned by none other than Halliburton:


"Solar panels destroying the sun could potentially be the worst man-made climate disaster in the history of the world, and Halliburton will not be taking part in that," the company stated in a press release issued Friday morning.  "It’s obvious, based on the findings of this neutral scientific research group, that humans needs to become more dependent on fossil fuels like oil and coal, not less."

My mirth over this story dwindled, however, when I noticed that almost every person who posted this story had done so because... they thought it was true. 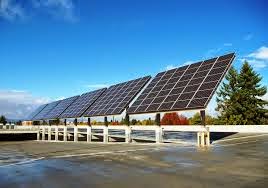 I wish I were making this up.  Here's a selection of the comments that I saw appended to the link.  You may want to put a pillow on your desk for the inevitable faceplant:


Green technology my ass.  The liberal pseudo-environmentalists are selling us out as usual.

Pass this link along!  Don't let this get swept under the rug!

Just another way they're going to make money off the fake climate change agenda.

Alot [sic] more believable than what you hear about the "greenhouse effect" bullshit.

I wonder how long it will take for the warmists to suppress this.

I don't know, folks.  I think that this one may have pushed me over the edge.  "Warmists?"  "Liberal pseudo-environmentalists?"

What, because we have the brainpower to recognize that you can't suck up sunlight with a fucking vacuum cleaner?

And even if light did work this way, we'd have a slightly larger problem than solar panels, you know?  Namely: plants.  As light-suckers go, the plants are a hell of a lot more efficient than solar panels, and there are a great many more of them.  So, what should our slogan be?  "Down with photosynthesis?"  "Pave the forest, save the planet?"

I know all too well, first hand, the state of science education in the United States.  And this is despite teaching in a pretty good school system, where there are a great many opportunities for in-depth study in science.  I know that between school budgets cutting staffing to the bone, and the purely ideological hacking of science education standards to remove controversial topics like climate change and evolution, it's a wonder kids don't graduate thinking that all matter is composed of the four elements Earth, Air, Fire, and Water.  (And interesting, too, that according to the article I linked, the first state to reject public school science standards explicitly because of the issue of climate change was the state of Wyoming -- a point that no doubt the writers of the satire in The National Report were trying to make by siting the fake "study" in Cheyenne.)

But really, people.  How ignorant about the world around you can you get?  This goes way past "dopeslap" territory, right into "please don't breed."

And to the people over at The National Report:  I'm uncertain whether to applaud, or ask you to publish a retraction.  Poe's Law notwithstanding, we really don't need more people voting against clean energy.
Posted by Gordon Bonnet at 2:14 AM