The woo-woos go to Wales

Some of you may remember that three years ago, just as the Mayan Apocalypse nonsense was beginning to get some traction, a cadre of nutjobs associated with J. Z. Knight's "Ramtha School of Enlightenment" descended on the little village of Bugarach in the southwest of France because they had somehow become convinced that it was the only place on Earth that wasn't going to be destroyed.  The mayor of Bugarach was understandably dismayed when thousands of dubiously sane apocalyptoids showed up and started camping out all around the village.  They were, they explained, expecting that when the End Times came, the nearby mountain (the Pic de Bugarach) was going to pop open in the fashion of a jack-in-the-box, and an alien spacecraft was going to come out and bring all of the assembled woo-woos to their new home in outer space.

Except, of course, that none of this happened, and the woo-woos eventually gave up and went home.  Same as the Harmonic Convergence people and the Rajneeshees did a generation earlier.  As mystifying as it seems, repeatedly failing in every single prediction they make never discourages the loyal following.  They disperse temporarily, but always resurface later, once again holding hands and chanting while barefoot and wearing daisy chains...

... and this time Wales is the lucky winner. 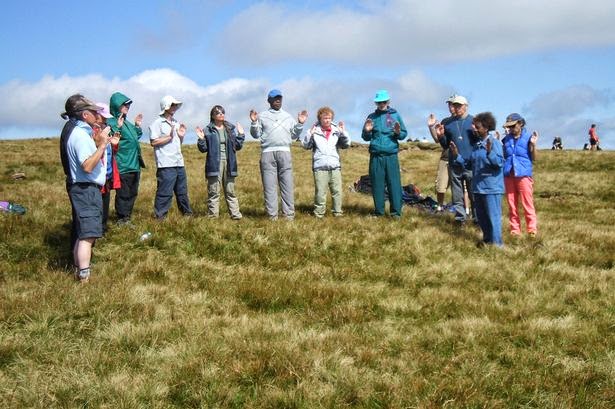 Our most recent iteration of this story comes to us courtesy of the "Aetherius Society," which hales back to 1958, when London cab driver George King was instructed by an "alien intelligence" to become a religious leader.  "Prepare yourself!" the voice told him.  "You are to become the voice of Interplanetary Parliament."  The alien intelligence said his name was "Aetherius" and that he lived on the planet Venus, despite the fact that Venus is basically a cross between an acid bath and a blast furnace, with a surface hot enough to melt lead.  Be that as it may, Aetherius did a lot of talking to and through King, delivering messages that included a cautionary note that if people didn't listen to the "Cosmic Masters," evil space guys were going to destroy the Earth.  However, with the help of Aetherius and others (including the same Krishna that the Hindus worship, except that the Aetherius people say that Krishna is from Saturn), everything would be just hunky-dory.

Oh, yeah, and Jesus, Buddha, Confucius, and Lao Tse were aliens, too.  Just to be clear on that.

But then, there's also this fixation on mountains, which is how Wales comes into the picture.  George King/Aetherius said that there were nineteen mountains around the world that were "holy places" that were "charged with spiritual energy," and these include Pen-y-Fan in the Brecon Beacons and Carnedd Llewelyn in Snowdonia.  And it is to the latter that the Aetherius Society members are going to be heading in August.

"Carnedd Llewelyn is one of nineteen mountains around the world that the Aetherius Society revere as holy," society member Richard Lawrence said.  "On August 23 we are arranging a pilgrimage...  The purpose of going up is to send out spiritual energy for world peace and to pray for the betterment of humanity.  The climbs are quite demanding, I find, and then at the top we raise our hands and join in prayer.  When I feel a burst of energy it could be strong heat in the palms or a tingling sensation throughout the body."

I don't know about you, but I would not consider a "tingling sensation" an adequate reward for busting my ass climbing a mountain.  But that's just me.  And at least, unlike the Pic de Bugarach, Carnedd Llewelyn isn't all that near any towns whose inhabitants the "pilgrims" will bother.  The nearest good-sized village is Bethesda, fourteen kilometers distant, which is quite a hike.  Plus, Bethesda is said by Wikipedia to be "infamous for its pubs," so maybe our pilgrims might oughta think about other accommodations in any case.

I suppose that the whole thing is harmless enough, but you have to wonder how it keeps happening.  I mean, if I were considering becoming an Aetherian, or whatever the hell they call themselves, I'd do some research first.  I'd start by looking up "alien UFO fringe groups" online, and after the first ten articles about the Heaven's Gate Cult and the Raëlians and (it must be said) the Scientologists, I'd pretty much go, "Well, fuck that."

So I won't be joining them in Wales, much as I think it's a lovely place that I'd like to visit again.  I'm not much for daisy chains and chanting.  Instead, I think I'll see what I can do in the way of achieving "tingling sensations" in the comfort and privacy of my own home.
Posted by Gordon Bonnet at 2:15 AM