Well, The Daily Mail Fail is at it again.

Today's headline, which in a contest would win in both the "Most Idiotic" and "Longest" categories, reads, "Is This the Skeleton of Legendary Devil Dog 'Black Shuck," Who Terrorized 16th Century East Anglia?  Folklore Tells of a SEVEN FOOT Hell Hound With Flaming Eyes."

Once you read the article that follows, though, you find out pretty quickly that it could have run just as well under a much shorter headline, such as, "Skeleton of Dog Found."  We get to the central point of the story pretty quickly, which is that some archaeologists found the bones of a largish dog in the ruins of Leiston Abbey.  But this bit -- which turns out to be the sole factual content of the article -- is buried amongst turgid prose like the following:


It roamed the countryside spreading death and terror – a giant, ferocious hell-hound with flaming eyes and savage claws.

For centuries, the beast that came to be known as Black Shuck struck fear into the hearts of all who crossed its path.

Just a single glimpse was enough to impart a fatal curse; the briefest encounter sufficient to suck the life from any hapless victim...

The beast’s most celebrated attack began at Holy Trinity church, Blythburgh. A clap of thunder burst open the church doors and a hairy black ‘devil dog’ came snarling in.

It ran through the congregation, killing a man and boy and causing the church steeple to fall through the roof.  Scorch marks still visible on the church doors are purported to have come from Shuck’s claws as it fled.

Local verse records the event thus: ‘All down the church in the midst of fire, the hellish monster flew, and, passing onward to the quire [sic], he many people slew.’

Next stop was 12 miles away in Bungay, where two worshippers were killed at St Mary’s church. One was left shrivelled ‘like a drawn purse’ as he prayed.

Which is all pretty scary-sounding.  And for fans of paranormal stories, the tale of "Black Shuck" is a creepy one; a hound from hell, bursting into the holy precinct of the church and killing people as they pray. 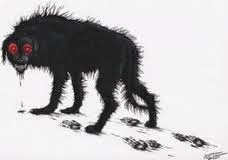 [image courtesy of the Creative Commons]

The problem is, it seems to have no more basis in the truth than Spring-heeled Jack and the ghost dogs of Ballechin House and the tumbling coffins of Barbados -- i.e., none.  It's a folk legend, a good tale to tell on a stormy night, but not much more than that.

Yes, I know that there are historical records of the thing.  In fact, in the interest of fairness, I'll present one here myself: 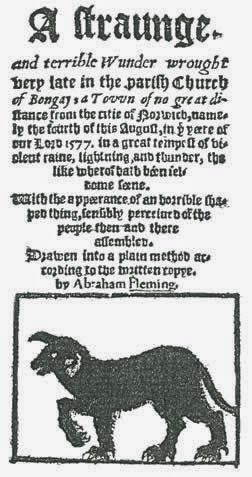 For those of you who don't want to strain your eyes reading old typography, it says, "A straunge, and terrible wunder wrought very late in the parish church of Bongay: a town of no great distance from the citie of Norwich, namely the fourth of this August, in ye yeere of our Lord 1577,  in a great tempest of violent raine, lightning and thunder, the like whereof hath been seldome seene.  With the appearance of an horrible shaped thing, sensibly perceived of the people then and there assembled.  Drawen into a plain method according to the written copye.  By Abraham Fleming."

Which is all well and good.  Far be it from me to contradict Mr. Fleming's opinion that the raine was straunge, but I think it's a reach to conclude that what probably was only an unusual weather event was contrived by a giant black dog from hell.  He goes on, though, to say that there was too a big dog, and he was too black, and he didn't stop at just causing a thunderstorm:


This black dog, or the divel in such a likenesse (God hee knoweth all who worketh all), running all along down the body of the church with great swiftnesse, and incredible haste, among the people, in a visible fourm and shape, passed between two persons, as they were kneeling uppon their knees, and occupied in prayer as it seemed, wrung the necks of them bothe at one instant clene backward, insomuch that even at a moment where they kneeled, they strangely dyed.

So there's that.  Of course, if you are a student of history you know that old records are rife with claims of crazy stuff that was "sensibly perceived of the people then and there assembled" and which are nevertheless almost certainly spun out of whole cloth.  And more germane to Black Shuck, given that there are similar legends from all over Europe, and even further afield, I think what we have here is the original Shaggy Dog Story.

The Isle of Man has the Moddey Dhoo, Wales has the Cŵn Annwn, and Scotland the Cù Sìth, just to name three.  You can go here and read about sightings of Black Dogs all over the world, which makes me think that if this thing really exists, it must have a hell of a time keeping its appointment calendar straight.  "You want me to show up for a church service in Glasgow on the 14th?"  *sound of pages flipping*  "I'm sorry, I'm scheduled for a séance in Liverpool that night.  I can possibly work you in on the 17th, but we'd have to do it before 6 PM, because I've got a crossroads to haunt that evening, and I'm expecting the Archbishop of Canterbury to come by.  Opportunities like that don't happen every day.  I hope you understand."

But back to The Daily Mail... they seem to be basing their story on two things: (1) the dog skeleton found in Leiston is big; and (2) Leiston is in East Anglia.  Because, obviously, there couldn't be an ordinary big dog in East Anglia, so any large dog skeleton would have to be Black Shuck.  It couldn't, for example, be an Irish Wolfhound, a breed owned for centuries by British nobility, and which gets... pretty freakin' huge: 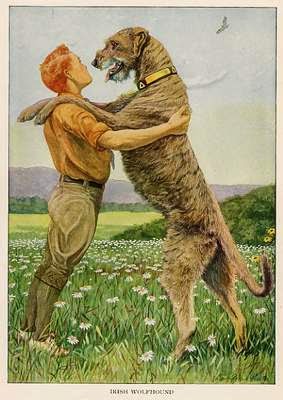 You also have to wonder, given that Black Shuck was supposedly a canine stand-in for Satan, how his skeleton would end up buried in an abbey.  You'd think that after he finished wringing the necks of honest churchgoers, he'd just vanish in a flash of sulfurous smoke, never to be seen again.

But no.  Now we have The Daily Mail further sinking their credibility (a feat I'd have thought was impossible) by asking us to believe that some random big dog skeleton proves the East Anglian legend was all true.  And I'm sure there will be people who will believe it.  Making me wish that The Daily Mail would go back to what they do best, which is writing stories on who the various royals and celebrities are sleeping with.  It may be dull as hell, but at least it has some basis in reality.