In today's episode of "Studies in Confirmation Bias," we have a story in The Examiner claiming that someone captured a UFO refueling in a chemtrail.

What cracked me up about this one is the way the author of the story, Tom Rose, seems to take it as given that (1) chemtrails exist, and (2) UFOs exist, so clearly they must have some connection.  Here's how Rose introduces the topic:


An incredible UFO video was uploaded to YouTube on Oct. 12, showing what appears to be an unidentified flying object "refueling" itself in the chemical contrail of a jet flying high above it.  The strange object, which resembles no known aircraft, and flies in a decidedly non-aerodynamic manner, seems to intentionally head directly into the chemtrail of the passing jet and hovers for a moment before moving on.

He goes on to write:


The nearly two minute video shows the original, unedited footage, without enhancement, in the opening segment, before switching to a magnified and slowed down version, which doesn't help to clear up the mysterious behavior of the unidentified aircraft.  In fact, the closeup reveals that, although there seems to be a flashing, navigational beacon on the UFO, its shape and configuration resembles no known aircraft, such as a helicopter, airplane or even a drone.

True, and there's a reason for that, which I'll get to in a moment.

He finishes up with a bang:


The chemtrail controversy has been raging for a few years now, with conspiracy theorists arguing there must be some secret meaning behind their sudden proliferation.  Could this incident explain the phenomenon?  Is it possible that alien aircraft are using the chemical exhaust fumes of high flying aircraft to refuel spacecraft in Earth's atmosphere?

The last sentence would be the odds-on favorite in a contest for the statement that caused the fastest simultaneous guffaw and facepalm.  But let's not be hasty, here.  Here's a still from the video, showing the strange, non-aerodynamic craft, of no known configuration, sucking up chemtrail fumes: 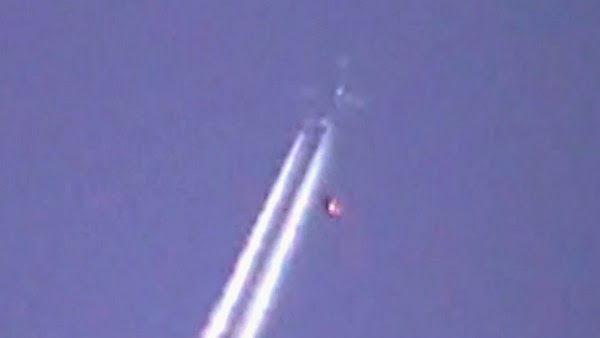 But to get the full effect, you should definitely watch the video, which is in the article I linked.  I watched the video twice through, because I was pretty certain I knew what the UFO actually was by twenty seconds in, but I wanted to be certain.  I'm no video analysis expert, mind you, but I'm still pretty sure.  You ready?

It's a red mylar balloon.

The first thing I noticed is that the "UFO" is clearly much lower in altitude than the jet is.  Rose even seems to have noticed that, and let it slip in his first line, in which he states that the jet is "flying high above" the mysterious craft.  So even if Rose is right that chemtrails exist, and UFOs exist, and chemtrails have some sort of mix of chemicals that could be useful to the pilots of UFOs, this particular UFO is probably a couple of miles too low to accomplish its goal in any case.

Second, the "UFO" isn't so much flying as it is drifting.  As balloons do.  The flashes you occasionally see are when bits of it are turned at the right angle toward the sun, and reflect some glare back toward the guy with the videocamera.  They're not "flashing navigational beacons."

So anyway, watch the video yourself, and see if you agree with me.  I'm willing to admit that there may be other explanations, even though I seriously doubt that there's any alien mischief (or, for that matter, evil chemtrail mischief) going on here.

On the other hand, perhaps it's the red mylar balloons we should be watching out for.  Those things are probably up to no good.
Posted by Gordon Bonnet at 4:03 AM