Battle of the wingnuts

Today, in the "More the Merrier" department, we have a story that involves Alex Jones, Glenn Beck, Cliven Bundy, Gandhi, Jesse Ventura, President Obama, and tangentially, Natural News.  How can we go wrong?

The whole thing started a year ago, when Beck called Jones out on his media outlet The Blaze for acting like he was batshit crazy, and yet calling himself a "sane conservative."  Beck was especially incensed by liberal commentator Piers Morgan's interviewing Jones on the topic of gun control, and thereby making it look like Jones was the face of conservatism.  "Unsurprisingly, Jones made a fool of himself," Beck wrote, "giving the left the poster boy for their attempts to paint every logical conservative as an extremist nut job." 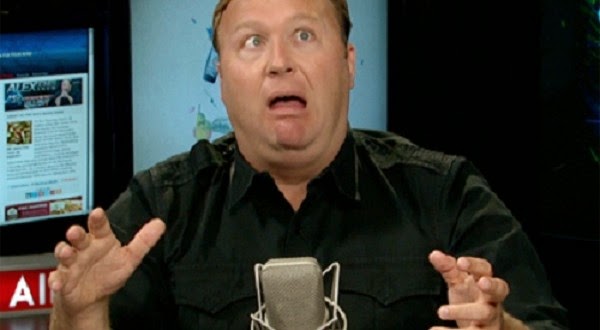 Well, Jones wasn't going to stand for that kind of talk, and this started a game of loony one-upmanship to see who could launch the wildest attack against the other.  Things really took off with the Cliven Bundy standoff this spring, in which Beck (surprisingly) took a stand against Bundy and his "sovereign citizen" wackos, and Jones blew up.  He called Beck a "Judas goat" (whatever the fuck that is) for not supporting Bundy's fight against the United States government, and later, referred to Beck as a "Benedict Arnold."

This led Beck to state, "I'm not going to respond to Alex Jones any more... he has his platform, and people who listen to him, and that's fine."

But the battle was far from over.  With Jones, the battle is never over.  So dear readers, pop yourself some popcorn, and sit back, cause shit's about to get real.

This week, Jones released what he calls a "huge story."  Not only is Beck a "Judas goat" and a "Benedict Arnold," he's... get ready...

Here's the introduction to the video:


David Knight joins Alex to discuss the accusation Glenn Beck recently made claiming that Alex is dangerous.  Beck claims Alex knowingly edited Cliven Bundy’s statements and wants a violent revolution to occur.  Any occasional listener to the show can testify to, Alex is neither about a violent revolution nor was he covering up Bundy’s remarks.

After all the attacks that Beck launches towards Alex and Infowars.com its [sic] becoming very obvious that Beck isn’t taking the queues [sic] from the SPLC or other groups like that, He’s writing the talking points.  Evidence thus far is suggesting that Glenn Beck IS a white house [sic] operative!

Right.  Glenn Beck is a White House operative.  The man who, just this summer, said that President Obama was "about to snap and start rounding up conservatives and putting them into death camps."

But the real fun starts in the video itself, which I strongly recommend all of you watch (it's on the link above).  I will warn you against drinking anything while watching it, though, and be forewarned that I will not be held responsible for any damage to your computer that might occur if you fail to heed these words.

"I don't attack Glenn Beck when he says horrible things about me.  I mean, he said I have sex with Charlie Sheen in showers, folks."

"This guy, this guy probably meets with Obama!"

"We wouldn't cover this if it was just Glenn Beck saying this, but he's saying White House talking points, Media Matters talking points that he originated.  So for anyone who's trained in tracking PsyOps and stuff, now it all clicked for me.  Why he says I want him arrested and put in a camp.  He said that a week and a half ago, we played the bizarre clip.  Why he says I want violence, why he says InfoWars wants violence.  Why we were covering up the racism of Cliven Bundy.  We were there in hours and uncovered it, the way it was spun is terrible.  We're all about fighting racism, here."

But if you like inadvertent humor, the best moment came about twelve minutes in, when Jones and his pal David Knight were discussing a quote that Knight had used:  "First they assassinate your character, and then they assassinate you."  Knight said he thought the quote originated with Jesse Ventura.

Yup.  Easy to see how you could get Jesse "The Body" Ventura confused with Mohandas Gandhi.  Understandable mistake.

Oh, and for the record, neither Ventura nor Gandhi ever said any such thing, as far as I can find.

So that's the latest salvo between Beck and Jones, each one seeing who can out-wacko whom.

But I haven't shown you the Natural News tie-in, yet!  Just this week, as if on cue, we had a repost over at the wonderful subreddit r/conspiratard of a "Sheeple Quiz" written by Mike Adams, who may be in hot contention with Beck and Jones for who is the biggest nutjob.  You must take a look at it.  (Important warning: every time you answer "B," your name gets boosted higher on the list of people who are being considered for FEMA death camps.)

So there you have it.  Today's dip in the deep end.  Myself, I'm waiting for Beck's rebuttal, which should be epic.  However he says that he's not going to talk about Alex Jones any more, I can't imagine him taking this lying down.  I mean, having sex in the shower with Charlie Sheen is one thing, but insinuations of meeting with President Obama are just crossing the line.
Posted by Gordon Bonnet at 3:07 AM