Is it just me, or are others noticing that the creationists seem to be getting a bit... desperate?

I ask the question because this Saturday (November 1) they're holding a conference at Michigan State University called the "Origin Summit."  This strikes me as a little like a guy tiptoeing up to a sleeping grizzly bear to boop him on the nose.  MSU is a highly regarded research institution, and in fact is the home of both Richard Lenski, whose decades-long study of evolution in bacteria is considered one of the best right-in-front-of-your-face examples of natural selection in action, and Robert Pennock, who testified as an expert witness in the landmark Kitzmiller vs. Dover Area School District court case, which found that teaching intelligent design in public schools was against the law.

So the whole thing is a good example of chutzpah, if nothing else.  But that hasn't stopped the creationists.  Amongst the topics in the conference will be the role of evolution in the philosophy of Adolf Hitler, "why the Big Bang is fake," a talk called "Natural Selection is NOT Evolution," and a "critique of Lenski's research."

It's hard to see what exactly they hope to accomplish, here, and even its organizers seem a little shaky on what they're doing.  "The Origin Summit is not overtly evangelistic," wrote Mike Smith, executive director of the group who is sponsoring the event.  "We hope to pave the way for evangelism (for the other campus ministries) by presenting the scientific evidence for intelligent design.  Once students realize they're created beings, and not the product of natural selection, they're much more open to the Gospel, to the message of God's love and forgiveness." 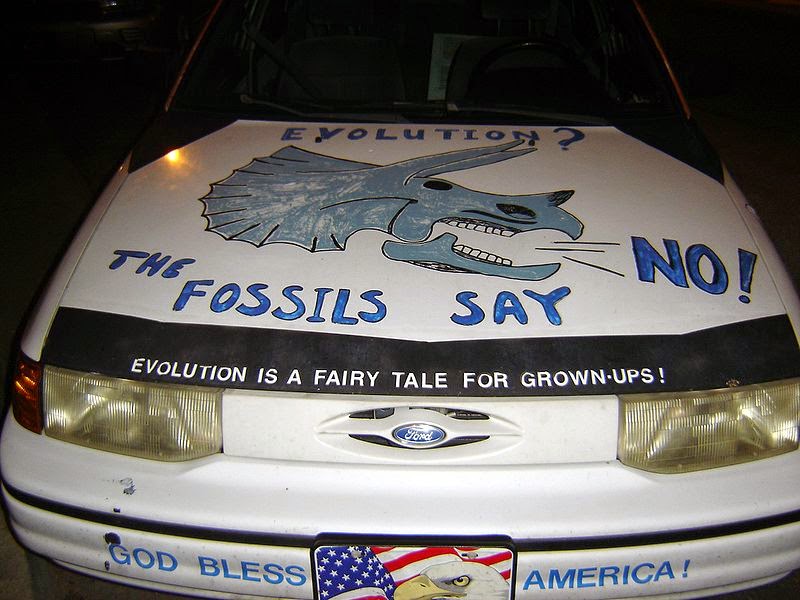 [image courtesy of photographer Amy Watts and the Wikimedia Commons]

The whole thing sounds more like street theater than a serious academic conference, though, given that there is no scientific evidence for intelligent design, much less young-earth creationism.  Lenski himself was asked to comment on the summit, and he responded, "In my opinion, this event will be just another forgettable blip in the long history of antiscience, antievolution screeds.  I suppose the speakers chose to target our research… because their event is being held here, and maybe because they find it confusing to their worldview that evolution isn’t supposed to happen."

"Confusing" is an understatement.  The amount of science that you have to ignore outright in order to accept creationism is staggering.  The summit has, of course, left some legitimate scientists a little uneasy; is having this kind of foolishness hosted at a university sending the wrong message?

"Free speech is at the heart of academic freedom and is something we take very seriously," wrote Kent Cassella, MSU’s associate vice president for communications.  "Any group, regardless of viewpoint, has the right to assemble in public areas of campus or petition for space to host an event so long as it does not engage in disorderly conduct or violate rules.  While MSU is not a sponsor of the creation summit, MSU is a marketplace of free ideas."

Which is, of course, exactly the right approach.  The creationists should be given every opportunity to publicly embarrass themselves.  I was initially against Bill Nye debating Ken Ham, for example, but in the end Ham showed so abysmally that even Pat Robertson said, "The dating of Bishop Ussher just doesn't comport with anything that is found in science and you can't just totally deny the geological formations that are out there...  (W)e have skeletons of dinosaurs that go back like 65 million years.  And to say that it all came around six thousand years ago is nonsense...  I don't believe in so-called evolution as non-theistic.  I believe that God started it all and he's in charge of all of it.  The fact that you have progressive evolution under his control.  That doesn't hurt my faith at all."

"I think it's time we come off of that stuff and say this isn't possible," he added.  "Let's be real, let's not make a joke of ourselves."

Wise words, albeit from a guy who usually gives every evidence of having a screw loose.

So about the Origin Summit: my thought is, let 'em have their fun.  If they want to go over to the Big Kids' Yard and put on a play, they can knock themselves out.  It's not going to slow down the real research for a moment, and may actually highlight how devoid of reason their stance is, which is all to the good.
Posted by Gordon Bonnet at 2:58 AM