Humans are born categorizers, and we are often uncomfortable when those categories don't turn out to be water-tight.  As they seldom are.  We want life to be neat, to fit in orderly little boxes with labels, and then not to have to rethink it.

But as Oliver Wendell Holmes said, "No generalization is worth a damn, including this one."  We have to be extraordinarily careful with how we fit a messy reality into artificial pigeonholes.

I frequently run into this with the attitudes many atheists have towards Christians as a whole, as if the label "Christian" adequately encompassed the enormous range of beliefs and attitudes of the people who call themselves by that name.  I'm sorry, you can't make a blanket statement about worldviews and expect that statement to reflect much of anything accurately.  "Christian" means one thing; someone who accepts the divinity of Jesus.  Beyond that, any expectation that you can make a further judgment is pretty much doomed to failure.  An umbrella that covers such disparate individuals as a liberal Episcopalian and a fundamentalist Pentecostal is bound to be fairly useless for telling you anything other than what the term literally means.

The reverse happens too, though.  As an atheist, I sometimes get some wry comments when people find out that I love Baroque and Renaissance religious choral music.  The Bach Mass in B Minor and Magnificat in D, in fact, are two of my all-time favorite works.  I posted a YouTube video to my Facebook page a while back of a chorus performing Thomas Tallis's gorgeous Spem in Alium, prompting a friend to comment, "I thought you didn't believe in any of this stuff."

Well, I don't.  Being labeled "atheist" doesn't mean I have to hate everything religious.  When I went to England fifteen years ago, the focus of my trip was visiting abbeys and cathedrals, and I did so with great appreciation of the beauty and solemnity of those spaces that many consider sacred.  And to the friend who questioned my love of religious music, I merely quoted Walt Whitman: "Do I contradict myself?  Very well, I contradict myself.  I am large, I contain multitudes."

Of course, we all do this sort of thing.  Religious folks do it about other religious folks, and atheists do it about each other.  Take, for example, the little screed that P. Z. Myers posted yesterday on his blog Pharyngula. 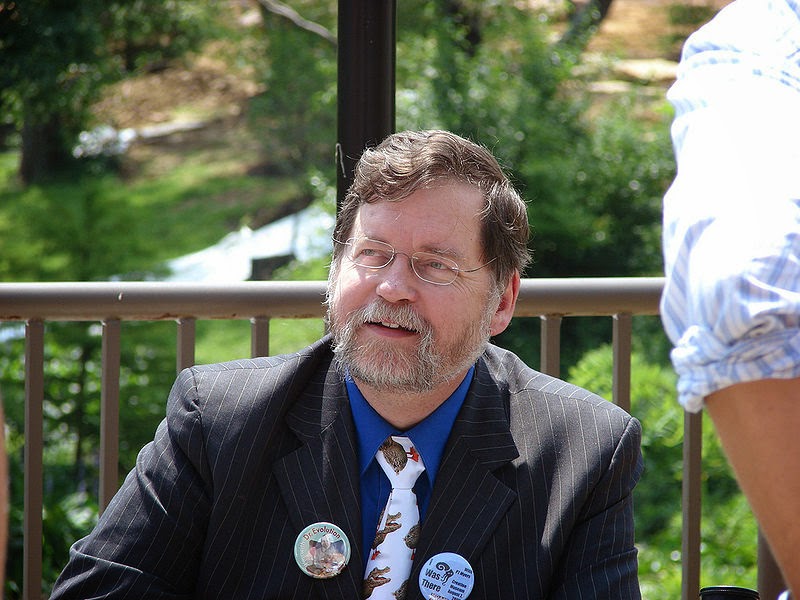 Now, I have a great deal of admiration for Myers for his staunch support of the teaching of evolution in public schools, and also for his take-no-shit-from-anyone attitude with regards to our government's tendency to handle religion with kid gloves.  But I think he's gone seriously off the beam here, falling into the kind of categorical thinking that I describe above.

The whole thing began with a comment Anita Sarkeesian made regarding her receipt of death threats over a speaking engagement at Utah State University.  Sarkeesian is a prominent feminist, and evidently her views ticked someone off enough that she was told she'd be killed because her "feminist viewpoints made her worthy of death."  Sarkeesian was interviewed about this issue, and there was an insinuation that the originator of the threat must be religious.  Sarkeesian disagreed, and in fact posted on her Twitter feed the statement, "I find it ironic that self-described 'atheist' men are far more hateful and awful towards me online than conservative Christians are."

This prompted a number of prominent atheists to point out that the word "atheist" means nothing more than "disbelieves in a deity;" it doesn't mean "nice person."  Myers took serious exception to this, and shot back:


Right.  ‘The dictionary doesn’t say atheists have to be decent human beings, therefore I’m going to be more annoyed that you have this expectation than at the fact that some atheists are hateful numpties.’

Whatever happened to the rational idea that we should look at our failings honestly and strive to correct them?  You know, when Francis Bacon set out to tell the world about how science should be done, he didn’t just pull a sentence out of a dictionary and be done with it.  “Inductive reasoning is best, rah rah rah!” No — he wrote at length about the pitfalls, and spelled out the preconceptions to which we are prone.

Well, on the one hand, he's right that rationality requires us to be thoughtfully self-aware, and to correct our failings.  But the fact remains that the word "atheist" does mean simply a lack of belief in god.  It might be reassuring for us atheists to pat ourselves on the back and think that along with that belief will come all sorts of other good things -- being logical, compassionate, reasonable, and accepting.  But humanity (like everything) is messy.  Just as the word "Christian" encompasses a huge range of beliefs and attitudes, so does "atheist."  The latter word, recall, could apply not only to myself and Myers, Stephen Hawking, Eugenie Scott, and Tim Minchin -- but also to Stalin and Pol Pot.

Myers finishes up by saying:


But I guess atheists have moved so far beyond mere scientists that self-awareness and recognition of their own errors of perception no longer matter — “There is no god!” is the great All of their philosophy, and no other consideration need be made.

Well, at least we’re better than the theists in one thing: our dogma is shorter and easier to memorize.

Which is about as accurate as saying "All Christians are illogical and narrow-minded."  I can only hope that he's being deliberately disingenuous here; surely he can't really think that atheists as a group don't care about anything other than saying "there is no god."

Yes, I think it's a shame that there are atheists who are jerks, and who would give Anita Sarkeesian grief about her work to combat misogyny.  I also think it's a shame that there are some Christians, and Muslims, and Buddhists, and so on, who are jerks.  It'd be nice if we could eliminate jerkishness from humanity entirely, and perhaps Myers's prodding atheists by saying, "C'mon, people, we're better than that," isn't entirely a bad thing.

But the fact is, there's no term you can apply to a human group that isn't going to result in the same kind of seeming internal contradiction.  People are complex, enigmatic creatures, surprising you every time you try to figure them out.  Perhaps instead of expecting umbrella terms to tell us very much, we should all try to find the commonalities that unite us -- the desire for love, understanding, kindness, safety, and adequate food, water and shelter.  Beyond that, let's look past the labels, and consider each other as individuals.
Posted by Gordon Bonnet at 4:53 AM