There's an odd tendency of conspiracy theorists to eat their young.

Again, not literally.  Don't get your hopes up.

I think the reason for this is that once you abandon logic and evidence as the sine qua non of understanding, you are out in some kind of netherworld of lies, suppositions, and paranoia, and it's only a matter of time before you become victim to the same foolishness you were perpetrating.  You give people the impression that no one is to be trusted, that anyone and everyone could be part of the conspiracy, and before you know it, your followers have decided that you're right... and include you in the assessment.

So it's with some degree of amusement that I report to you that it's finally happened to the archduke and court jester of the conspiracy theory world -- David Icke and Alex Jones.

Icke was outed, fittingly enough, in a YouTube video in which he is caught "shape-shifting into a Reptilian."  Odd, isn't it, that these Reptilian overlords of ours are brilliant enough to infiltrate themselves into every level of government, break into the sanctum sanctorum of military intelligence, and then can't remember to keep their costumes in place when they're on the air?  But yes, you heard it here first: Icke, who said that Reptilians are in control of everything from the CIA to the U.S. public education system, is himself a Reptilian.

Even more wryly amusing is the fact that Alex Jones had the whistle blown on the site Before It's News, because they're about the only website that is even more bizarrely paranoid than Jones's own site InfoWars.  Here's the exposé about Jones:

What's funnier than the article itself, though, is that they illustrate their contention with a picture of the "Gorn" from the Star Trek original series episode "Arena." 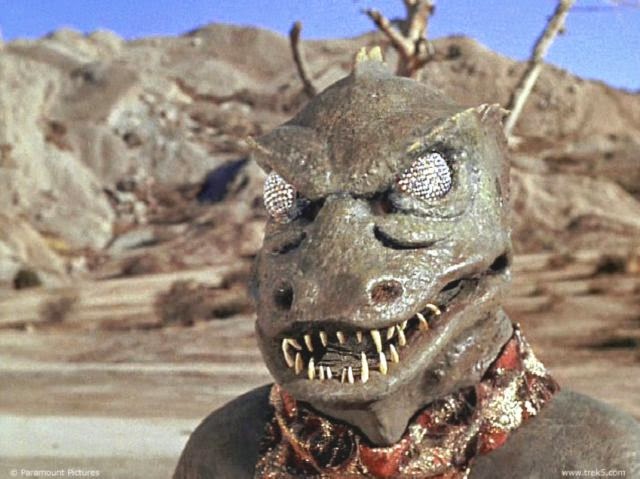 You may remember this episode because it contained the most ridiculous fight scene ever filmed, featuring Captain Kirk fighting a guy wearing a huge plastic dinosaur head.  But evidently the dinosaur head prevented the actor playing the Gorn from seeing very well, so he would lunge at Kirk, and miss him by about ten feet.  Kirk, of course, being Kirk, would pretend that he was in extreme danger, and he would immediately drop and roll, giving him ample opportunity to tear his shirt, because no episode of the original series was complete if you didn't get a chance to see at least one of William Shatner's nipples.  The Gorn, however, would go staggering off in some random direction until he happened by pure chance to locate Kirk again, and the whole scenario would replay.

It was a little like an extremely slow-moving two-person game of "Marco Polo."

Anyhow, there you have it.   Two alien infiltrators exposed, by people who evidently don't understand the concept of "video compression artifact."  But even stranger is that the conspiracy theorists themselves don't realize how they are setting themselves up to be knocked down.  David Icke and Alex Jones have been preaching to people for ages not to trust... well, everyone.

They, of all people, should be entirely unsurprised to find that some people are now beginning to realize that everyone includes them.