Let me just say that I love it when the woo-woos team up.

It gets a little old, sifting through the blurry Bigfoot photos, sketchy claims of ghost sightings, and anecdotal evidence for spirit communication day after day.  Much as I'm committed to keeping abreast of what's happening in the world of woo, it does seem a little like a compilation of twice-told tales after a while.

So it always brightens my day to see a new approach.  Such as the story that appeared on PRLog yesterday that claims that the best way to study UFOs scientifically is to start out by summoning them using telepathy. 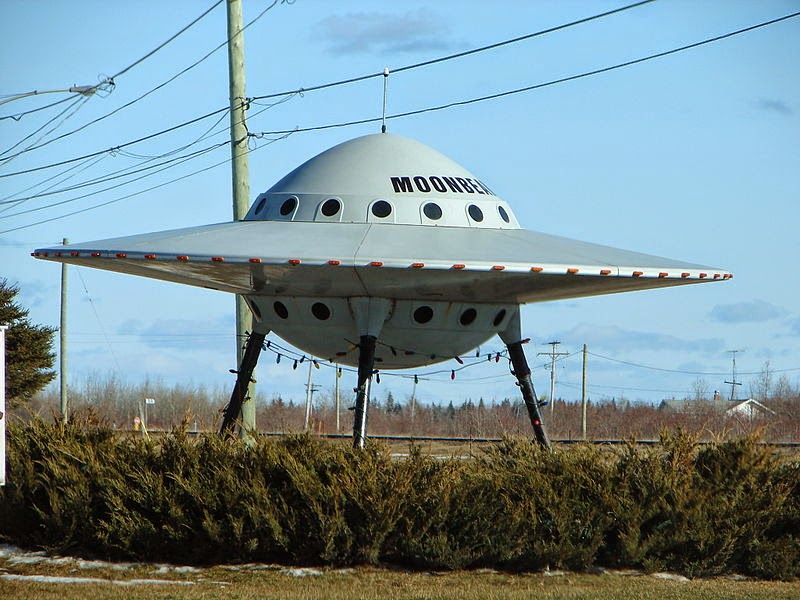 Hans Boysen, who wrote the press release, seems awfully excited about the whole thing.  He starts out with a bang:


Some of the most fascinating UFO footage is now being successfully captured daily by those who are prepared with photographic and video equipment. Many are finding that opportunity meets preparation for those that call out or “summon” UFOs.

I can see how that would make it more convenient.  It must be disappointing for your aspiring UFOlogist to go out, night after night, and see zero UFOs.

Boysen quotes Robert Bingham, a "summoning expert from Los Angeles," on the subject.  "It's like prayer," Bingham said, which is true insofar as neither one actually works.  But then Bingham goes on to explain further:


Many people do not realize how powerful telepathic communication is.  If anyone has ever prayed and received an answer to prayer, they know that our thoughts can escape the confines of our minds.  We are discovering our consciousness is unbounded.  Our brain waves sound like static AM radio, but our thoughts can be interpreted and converted into electrical and mechanical energy as proven by Miguel Nicolelis, MD, PhD, professor of neurobiology at Duke University Medical Center.  They were able to prove that a monkey could control a robot with its thoughts.  Telepathic communication is the reason why prayer works.

Except that what Nicolelis did had zero to do with telepathy or UFOs.  Here's an excerpt from Nicolelis's own website about his research:


In particular, about 12 years ago we created a preparation that we named brain-machine interfaces.  And you have a scheme here that describes how it works.  The idea is, let's have some sensors that listen to these storms, this electrical firing, and see if you can, in the same time that it takes for this storm to leave the brain and reach the legs or the arms of an animal -- about half a second -- let's see if we can read these signals, extract the motor messages that are embedded in it, translate it into digital commands and send it to an artificial device that will reproduce the voluntary motor wheel of that brain in real time.  And see if we can measure how well we can translate that message when we compare to the way the body does that.

So we have the usual thing, which is a woo-woo completely misrepresenting science.  Because what Nicolelis and his team accomplished (and which I am in no way trying to diminish; it's amazing research) was using brain implants and a digital interface to allow a monkey to control a robotic arm. The only way that would tell us anything about telepathic communication, aliens, or prayer is if you thought that everyone who claims to be telepathic, and the aliens, and god, were all equipped with computerized implants.

That doesn't stop Boysen, though, who plows right on ahead as if what he was saying made a shred of sense:


More Ufologists are beginning to understand this powerful technique because the results can be astounding.  Summoning is a singularity and clarity of thought with intention and direction.  Some achieve this by meditation and others, like Robert Bingham, simply convey his telepathic messages.  Both are an effective way of transmitting thought, but "alien trust" and experience seem to be a predominant factor of proficiency.

Kind of like training a skittish dog, is how I see it.  Maybe you just go out in your back yard at night and send soothing telepathic messages like "It's okay" and "I'm not gonna hurtcha" and "whoozagoodboy?"  And the aliens slowly, cautiously skootch their spaceship toward you.  And then you give them a treat.

So there you have it.  Our latest team effort, this one bringing the UFO silliness together with the psychic silliness.  Unfortunately for Boysen et al., though, a goofy idea does not become less goofy by hybridizing it with another goofy idea.  Then you have (goofy)2, and that's just kind of pathetic.
Posted by Gordon Bonnet at 2:48 AM