Hiring a crew for the ark

I've written before about "Ark Encounter," the biblical theme park currently under construction in Williamston, Kentucky.  The centerpiece, a giant replica of Noah's Ark, is scheduled to open for visitors in 2016, and the park has received promises of millions of dollars in state tax breaks as an incentive. 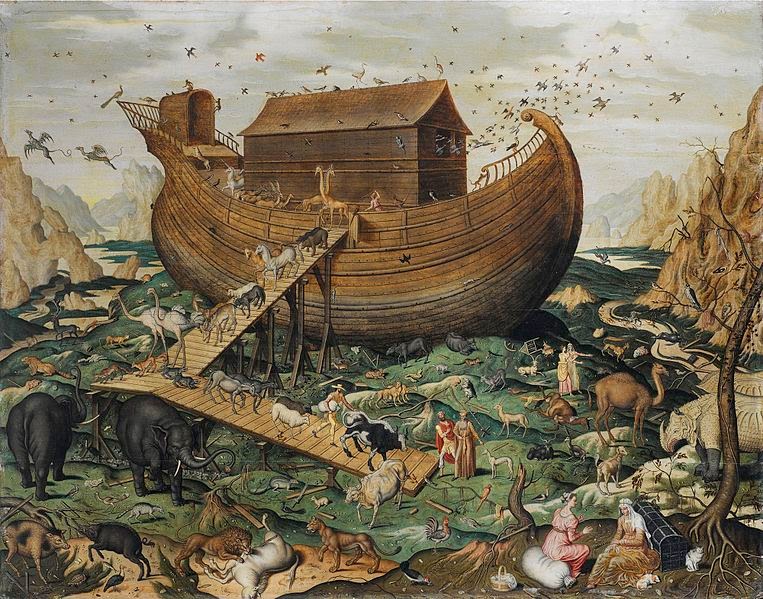 It is this last-mentioned bit that has created controversy, because as a clearly religious attraction, to have what amounts to government financial support for something like Ark Encounter raises serious issues of the separation of church and state.  But no more, really, than the fact that churches themselves are exempt from property tax, a practice that I find frankly baffling.

But now the Ark has ended up in further hot water because Ark Encounter's executive president, Mike Zovath, has begun looking for employees for the park, and has issued a statement that any applicants need to sign a statement that they believe in biblical inerrancy in general, and the veracity of the Great Flood in particular.

Gil Lawson, communications director for the Kentucky Tourism, Arts, and Heritage Cabinet, said that such a practice would run counter to the law, and would result in Zovath's enterprise losing its tax breaks.  "We expect all of the companies that get tax incentives to obey the law," Lawson said, which seems unequivocal enough.

It does raise a couple of questions, though.  The first is, why would anyone who doesn't believe in the Great Flood even want to work there?  I certainly wouldn't, mostly because it would require my keeping both my temper and a straight face when talking to people who believe that somehow one dude from Palestine rounded up pairs of every species on Earth, including musk ox from the Yukon, and put them all on a single boat.

Not to mention believing that a six-hundred-year-old man and his four-hundred-year-old sons built said boat in less than a year, despite the fact that huge crews of construction workers, using modern tools, started working on an ark four years ago and still aren't done.  Good thing we're not counting on them to save us from a Divine Flood, isn't it?

But that's not the only problem.  In one sense, isn't Zovath in the right for expecting that his employees will support the mission of the company for which they work?  Recall the hue and cry over Martin Gaskell's disqualification for a directorship at the University of (guess where) Kentucky's astronomical observatory back in 2010 because he was a biblical literalist, who therefore disbelieved in not only the Big Bang but in the size and age of the observable universe.  Secularists, including myself, said, "Well, duh.  Of course he's not qualified.  He doesn't believe in the fundamentals of the field he's representing."

The problem is, the knife cuts both ways, and in fact in the piece I wrote about Gaskell (linked above), I even used the example of an atheist who applies for a position as a minister of a Christian church, and then complains when he doesn't get hired.  Isn't that what's happening here?

Zovath, of course, is a little panicked, because the loss of the tax credits could cost his company an average of 1.8 million dollars a year.  And it's not like they haven't already had their money woes; they've had repeated delays because of funding issues.  "We’re hoping the state takes a hard look at their position, and changes their position so it doesn’t go further than this," Zovath told reporters, when the state's objecting to his hiring practices hit the news.

So I find myself unexpectedly on Zovath's side, here.  On the other hand, the whole thing would never have become an issue if the state of Kentucky hadn't flouted separation of church and state laws by giving them tax incentives in the first place.

In any case, it'll be interesting to see how the whole thing plays out.  If I can indulge in a moment of schadenfreude, I have to admit that no one will be happier than me if the whole Ark Encounter capsizes; the last thing we need is more glitzy opportunities to pass off Bronze Age mythology as science to children.  But it does place the state of Kentucky in a peculiar quandary.  Either they have to push Ark Encounter into a hiring practice that might result in their having employees who think what they're doing is idiotic, or they have to admit that they were wrong to give a purely religious enterprise government-funded tax incentives.

Which, I believe, is called "the chickens coming home to roost."
Posted by Gordon Bonnet at 2:51 AM