The American public still apparently has a taste for the apocalyptic, considering the recent appearance of the Rapture-based movie Left Behind starring Nicolas Cage.  Cage plays a character called "Rayford Steele," meaning that he is of course the action hero, similar to David Ryder in Space Mutiny, whose many names are chronicled in this not-to-be-missed montage courtesy of Mystery Science Theater 3000.

But unfortunately, the critics aren't exactly enamored of Left Behind.  It's currently running at an abysmal 2% approval rating at the site Rotten Tomatoes.  Here are a few of my favorite reviews:


Left Behind is one of those films so deeply, fundamentally terrible that it feels unwittingly high-concept.

Aside from [its] faulty conceit, the movie, on a pure thriller level, is a massive collection of awkward, poorly written character moments and supposedly spectacular set pieces that are stretched far too thin.

Score one for Satan.

And the best one of all:


I can't wait for Nic Cage to explain THIS one to God on Judgment Day.

But the fact remains that a sizable number of Americans believe that this movie is reflective of reality, and that it is accurate in concept if not in the exact details.  Sooner or later, probably sooner, the holy will be assumed bodily up into heaven, leaving the rest of us poor slobs to duke it out here, not to mention contending with the Scarlet Whore of Babylon, the Four Apocalyptic Horsepersons, the Beast With Seven Heads, and other special offers.

But this does raise certain inevitable theological quandaries.  What about innocents who are caught up, all unwary, in the whole end-of-the-world free-for-all?  It hardly seems fair that the sins of us Bad Guys should be visited upon individuals who don't really deserve it, like little infidel children and so on.

And it's not just the kids, you know.  What about the pets?  Well, at least that we can do something about, at least if you believe the efforts of Lansing, Michigan True Believer Sharon Moss and her unbelieving best friend Carol, who have founded a company called "After the Rapture Pet Care." 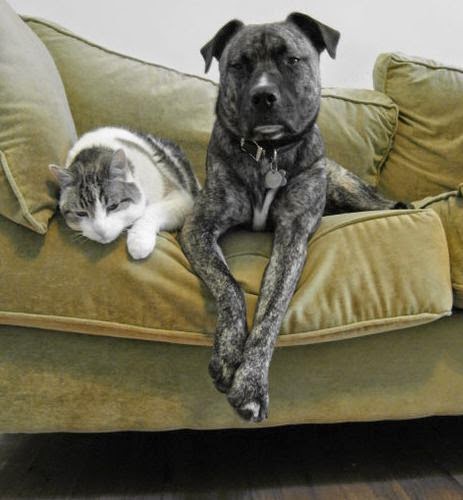 While I was reading this, I kept waiting for the other shoe to drop -- for there to be some sort of "We're kidding!" announcement, or at least an admission that it was a money-making enterprise by some scheming atheists trying to bamboozle (and simultaneously make fun of) gullible Christians.  But apparently, this thing is for real.  For a "small fee" (I think a ten-dollar registration charge is all it takes, although I could be misreading the fine print), holy individuals will be paired up with "nice non-Christians" who are willing to take and care for any Left Behind Pets.  Right from their website:


When all the Christians on the planet disappear, there will certainly be massive confusion.  However, the majority of people will still be on earth, and communications will be their first priority to maintain.  Therefore, I believe it will not be a problem to coordinate activities to rescue and care for your pets.  As far as the data about all registered pets, it is located on Google servers (the most secure servers in the world) as well as our own server in Lansing, Michigan (away from political and military hot spots to minimize chance of destruction if there is a post-Rapture war).  The non-Christian administrators assigned to coordinate our efforts after we’re gone are also located in multiple locations, all with log in information.

You can even purchase a stylish "After the Rapture Pet Care Volunteer Pet Caregiver" t-shirt for only $38.

Although the thought crosses my mind: wouldn't wearing such a t-shirt identify you as a sinner?  After all, if you are planning on taking care of Raptured people's pets, it's pretty much equivalent to admitting you're one of the lost.  I'd wear one just for fun, and also because I don't think anyone has any particular questions about my status apropos of the Last Judgment, but I'm not forking over $38 to do it.

But if you're interested, you can also get mugs, bumper stickers, and totes.  Me, I'm gonna save my money.  Certain as I am that I'll still be around should the Rapture actually happen, I have no particular desire to look after pets left behind by the pious.  I already have two dogs, not to mention a cat who has the temperament of the Antichrist, and frankly, that's about all I can handle.

On the other hand, if there's anyone who is wondering what will happen to their collection of classic sports cars After the Rapture, and wants someone to be ready to step in, I'm happy to help.  Selfless, that's me.
Posted by Gordon Bonnet at 2:10 AM

Email ThisBlogThis!Share to TwitterShare to FacebookShare to Pinterest
Labels: After the Rapture, apocalypse, Book of Revelation, evangelical Christianity, Left Behind, Rapture