Although it's pretty obvious that patriotism can be taken too far, I'm all for making the country you live in the best it can be, and then expressing your pride in it.  There are a lot of things I like about being American, for example; and although there are times I wish I lived elsewhere (mostly after listening to Ann Coulter), all in all I'm pretty happy about being a citizen of the United States.

Of course, there's a couple of ways this perfectly natural predilection for your own culture can go wrong.  One is that it can blind you to its faults.  Consider the column this week from Fox News contributor Dr. Keith Ablow, who said that what the world needs is an American jihad:


An American jihad would turn back and topple the terrible self-loathing in our citizens set in motion by President Obama, beginning with his ‘apology tour’ — a psychological plague... We would not only allow, but teach, Americans — including American children — to internalize and project their justifiable feelings of pride in our democracy as superior to all other forms of government. In grade schools we would teach the truth that the founding of our nation and its survival in the face of communism and fascism weren’t just good luck or good planning, but preordained by our commitment to the truth about the essential nature of man. And we would embrace the certain knowledge that history will eventually spread our values all over the globe.

We the People of the United States are good and we are right. And we need the spirit of an American jihad to properly invite, intensify and focus our intentions to preserve, protect and defend our Constitution here at home, and to seek to spread its principles abroad.

So yeah.  I can see no way that that could go wrong.

But there's a second, and more insidious, way that unbridled patriotism can go awry, and that's when you come to the conclusion that anything that's good must have come from your culture.  And as if to bookend Dr. Ablow's jingoistic screed, this week we had some baffling observations from the Prime Minister of India, Narendra Modi.

Modi addressed a gathering of doctors and other professionals in Mumbai last Saturday, and presented his opinion that advances in our understanding of genetics and medicine were not due to research done primarily in the United States, Canada, and Western Europe; the West was merely rediscovering what the Indians have known all along:


We can feel proud of what our country achieved in medical science at one point of time.  We all read about Karna in the Mahabharata. If we think a little more, we realise that the Mahabharata says Karna was not born from his mother’s womb.  This means that genetic science was present at that time.  That is why Karna could be born outside his mother’s womb.

But that is far and away not the most bizarre thing that Modi said.  As regards to astronomy, Modi made the following observation:


There must be many areas in which our ancestors made big contributions.  Some of these are well recognized.  If we talk about space science, our ancestors had, at some point, displayed great strengths in space science.  What people like Aryabhata had said centuries ago is being recognized by science today.  What I mean to say is that we are a country which had these capabilities.  We need to regain these.

And lest you think he was just talking about astronomical observations, you should be aware that Modi believes that airplanes were invented by the god Rama.

My favorite comment, though, was about a different god:


We worship Lord Ganesha.  There must have been some plastic surgeon at that time who got an elephant’s head on the body of a human being and began the practice of plastic surgery.

That's right, folks; the leader of one of the most populous nations on Earth thinks that an elephant-headed mythological figure is evidence that his distant ancestors had discovered how to do plastic surgery. 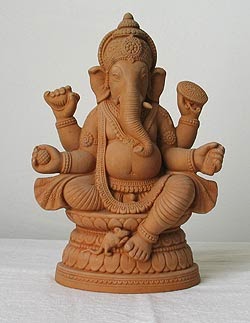 It's all very well to be proud of your culture, nation, religion, ethnicity, or whatever.  But being willfully blind to the accomplishments of others is hardly a virtue.  "I'm happy I'm an American" can all too easily morph into "I'm happy I'm not from Ruritania," and that into "If anything great is out there, it must be from the United States and not from Ruritania."

Which is not only bigoted, it's also demonstrably false.
Posted by Gordon Bonnet at 2:45 AM