Shooting down the false flag

I'm frequently asked how I can write daily on this blog without losing my marbles.  Deliberately immersing myself in the silly things some people believe, you'd think, would be a recipe for cynicism and/or despair.

The truth is, I'm still generally an optimist.  When you think about it, it'd be kind of silly to have a blog like this if I thought gullibility was incurable.  I'm confident that people can adopt a skeptical outlook, and can choose to look at the world through the lens of evidence and logic.

But it doesn't mean I don't sometimes get angry.

The thing that pushes the rage button the hardest is the combination of stubborn ignorance and lack of compassion.  When someone makes a claim that not only flies in the face of rationality, but dehumanizes and demeans, that makes me see red.

Like the claim that is popping up all over conspiracy websites, that the whole Ebola epidemic is being faked by "crisis actors." 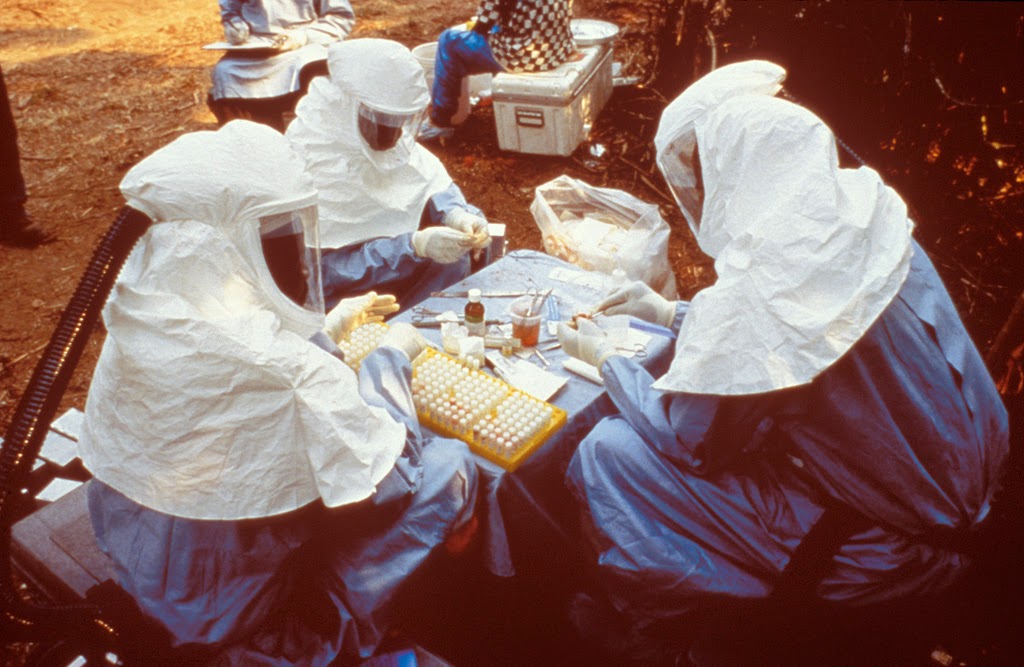 I've dealt with this topic before, but from the standpoint of actors staging school shootings -- a heinous enough claim.  But now, we have people saying that there's no such thing as Ebola.  The whole thing, they say, was invented so as to give world leaders (especially President Obama) the leverage to declare martial law and turn the United States into a dictatorship.

There's been buzz about this on the r/conspiracy subreddit, which is hardly surprising given that this is where the whole "crisis actors" nonsense gained traction after the Sandy Hook massacre.  Here's how it's being framed:


You have them in Africa, in New York, San Francisco, Haiti, and other places. Yes, they are sick and they are dying. But that doesn’t make an epidemic, because the tiny virus that was supposed to be at the bottom of all this is missing from the equation.

This tells you how to invent a fake epidemic. You take many sick and dying people, and you claim there is one germ that is causing all the trouble. You promote a few diagnostic tests that ‘will confirm the presence of the germ’ and you tell people they must be tested.

But the tests don’t really confirm the presence of the germ. They’re deceptive and useless. Of course, the test will register positive in many cases. These positive people are said to be victims of the one germ that is at the root of the epidemic.

You tie together and link together people who are sick and dying for various reasons, and you claim they’re all dying because of the One Germ. That gives you a powerful psychological ploy, because people are always looking for the one unified thing that explains a whole host of disturbing facts. You give them what they want.

This is from a blog post from Jon Rappoport, who (by the way) also claims that there's no such thing as SARS, and that HIV doesn't cause AIDS.

Mad yet?  Wait till you see the piece that showed up over at UFO Blogger yesterday -- that hospitals are hiring actors to feign symptoms of Ebola, for some undisclosed purpose.  The author of the post includes the following quote from New York City Health and Hospitals Corporation's chief medical officer, Dr. Ross Wilson: "If those patients have symptoms and a travel history we would expect them to be isolated within a few minutes in that emergency room.  Then we would call the Department of Health and complete a further work-up with the patient being isolated."

My guess is that the reason (assuming the story isn't an out-and-out lie) is to train hospital staff in proper protocol for dealing with a dangerous virus, but that isn't the implication.  The implication is that the whole thing is fake, that what the CDC is saying is nothing more than a smokescreen.

A "false flag."  Oh, how I hate that phrase.  And no, I'm not going to present the evidence to the contrary, because a simple online search for scientific papers about this disease will turn up so much information that I wouldn't have room to fit it in this post.

The degree to which this kind of claim is irresponsible is staggering, but so is the lack of simple compassion.  There have been 4,000 deaths from this hideous disease to date, with every indication that we haven't even neared the peak.  There are five suspected and one confirmed cases in Spain, and another couple of suspected cases here in the United States besides the one man who died two days ago -- pointing to the possibility that we may have a bigger problem than anyone thought at first.  To demean the suffering of the victims, and the efforts of the medical establishment to combat this virus, is disrespectful at best and ugly, belittling propaganda at worst.

So yeah, sometimes I do get angry.  Like this morning.  I will admit to having yelled, "Are you fucking kidding me?" at my computer when I discovered this story.  But I remain confident that the good guys -- the compassionate, rational, kind, honorable people -- still far outnumber the bad.

And as for the bottom-feeders who are currently claiming that the Ebola epidemic is fake; I'd like to suggest that you crawl back in your holes, and get out of the way of the people who are actually doing something to help the people who are suffering from this very real, and very dangerous, virus.