The future according to Adam Sandler

It's not often that you get to witness the birth of a conspiracy theory.

But today I'm going to tell you about a conspiracy theory whose provenance we can identify with near exactitude.  And since it involves not only conspiracy theorists, but The Onion, Princess Diana, neo-Nazis, and Adam Sandler, you know it's gonna be a good story.

The whole thing started with a story run in August by Clickhole, a satirical website that is an offshoot of The Onion.  Entitled, "Five Tragedies Weirdly Predicted by Adam Sandler," the article tells about five instances when Sandler gave hints (or outright statements) in his movies or comedy acts about upcoming world events, to wit:
So there you are, then.  Pretty amazing, yes?

Well, no, and for the very good reason that Sandler didn't say (or do) any of the things that the Clickhole article said.  In other words, the whole thing was made up from top to bottom.  Not surprising; it's satire, remember? 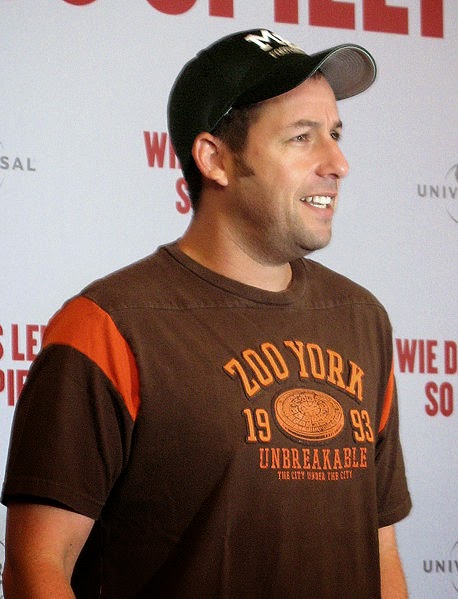 [image courtesy of photographer Franz Richter and the Wikimedia Commons]

But that didn't stop people from falling for it.  Lots of people.  Not only did they miss the "satire" piece, they also never bothered to fact check, even to the extent of watching the damn movies and television shows where all of these shenanigans allegedly happened.  It started popping up all over the online media, making appearances on blogs, Twitter, and conspiracy theory websites like Godlike Productions and Literally Unbelievable.  Then, the neo-Nazis got a hold of it, and it ended up on their site Stormfront, where the link was posted with the following wonderful message: "If any of this is true, it just shows how Jews do make shit happen and probably communicate via movies."

You'd think that communicating via communicating would be easier, wouldn't you?  I mean, why go to all of the trouble of making a movie, including all of the lengthy and costly post-production stuff, marketing, and so on, when you could just pick up a phone and tell your Evil Illuminati Henchmen your future predictions?  After all, in the movies, anyone could be watching.  Even a neo-Nazi could be watching.  And then the secret's out, you know?

I mean, I have some first-hand experience in this regard.  My wife is Jewish, and when she wants to tell me something, she doesn't make a movie about it and wait for me to go to the theater and watch it, she just tells me.  She's kind of direct that way.

But the whole thing blew up so fast that it ended up having its own page on Snopes, wherein we are told in no uncertain terms that Adam Sandler can not actually foretell the future.

I'm not expecting people to believe this, though.  Any time Snopes posts anything, they get accused of being shills or of participating in a coverup.  Which means that I probably will be accused of the same thing, especially now that I've revealed that my wife is Jewish.

As I've observed so many times, with conspiracy theorists, you can't win.  And that goes double for the neo-Nazis.
Posted by Gordon Bonnet at 2:35 AM