Yesterday I was thinking about issues of empowerment versus despair.

I get asked questions along this line frequently.  Being an atheist, how can I not let my perception that the world is without final purpose drive me downward emotionally?  And linked to this is the similar question of how, as someone who is very aware of human failings (both in the intellectual and social realms), I don't give up on our species entirely.

I think it has to do with my attitude that even if all I make are small steps, it is still better to make those steps than to give up and stand still.  It is my motivation for writing this blog.  Perhaps a lot of what I do here at Skeptophilia is preaching to the choir; I suspect that most of my readership comes from people who, like myself, are questioners and skeptics and rationalists.  But if by what I write I can prod even one person to take a closer look at his or her basic assumptions about how the universe works, then what I am doing is worth it.

The same impetus keeps me teaching.  I know that most of my students won't become scientists, and I am absolutely fine with that.  I also know I won't be able to reach them all, a truth which is discouraging but perhaps inevitable.  But if I can open up the eyes of some of the people in my classes -- show them a bit of the world they hadn't ever thought about, make them go, "Wow, this universe is a strange and cool and wondrous place!" -- then I will have succeeded.

Which brings me to Wangari Maathai.

In this disillusioned and jaded world, Maathai was a true hero.  She was born in Kenya in 1940, and grew up in traditional Kikuyu culture -- strict gender roles, and an attitude toward the land that it was meant to be used, not protected.  Her shattering of the terribly low glass ceiling for women in east Africa started early, though.  She graduated with a Ph.D. in veterinary medicine 1971, becoming the first east African woman to earn a doctorate, and shortly afterwards was hired to teach veterinary science at the University of Nairobi. 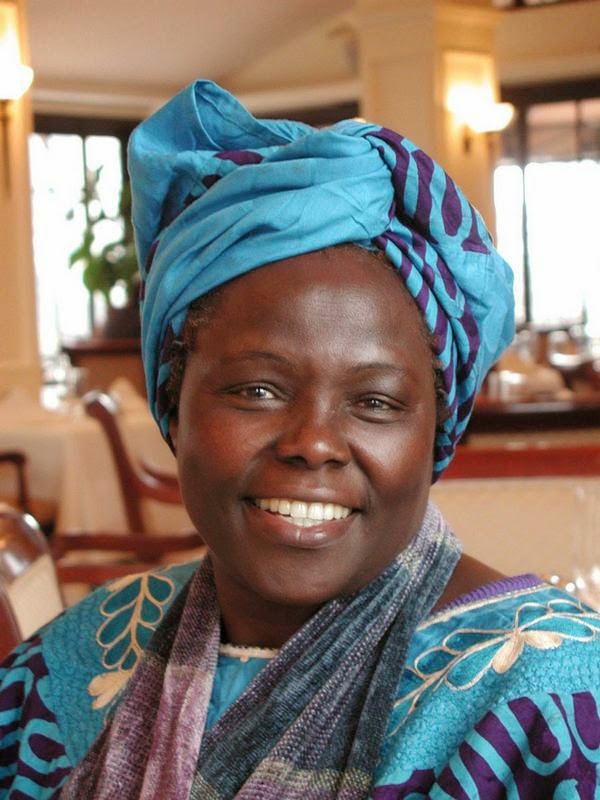 But Maathai was not content with being a college lecturer, as groundbreaking as that was for a woman of her culture.  She looked around her at the environmental devastation in her beloved country, and the lack of empowerment many women felt, and decided that there was no reason she had to accept either of those things.

So she changed the world.

She started the Green Belt Movement, a campaign for tree replanting.  "When resources are degraded, we start competing for them," Maathai wrote, "whether it is at the local level in Kenya, where we had tribal clashes over land and water, or at the global level, where we are fighting over water, oil, and minerals.  So one way to promote peace is to promote sustainable management and equitable distribution of resources."

She fought for the rights of women, successfully instituting a small business loan program in rural Kenya with the hopes of making villages self-sufficient, and making women no longer dependent on men for income.  She fostered tree replanting and environmental protection programs all over east Africa, while simultaneously encouraging sustainable farming practices that did not rely on cutting down forests and exhausting farmland.

And it worked, but it was not without cost.  Her husband divorced her in 1977, claiming that she was "too strong-minded for a woman" and that he was "unable to control her."  The government, then a one-party dictatorship, tried to silence her, first with a disinformation program (they called her women's rights group "a bunch of divorcees controlled by a crazy woman").  She was attacked and beaten by policemen, arrested more than once, and was on a list of people targeted by President Daniel arap Moi for assassination.

It didn't stop her.  "In order to accomplish anything," Maathai said, "we must keep our feelings of empowerment ahead of our feelings of despair.  We cannot do everything, but still there are many things we can do."

Many things.  Yes, she did indeed.  She was instrumental in Kenya's return to a multi-party democracy.  She singlehandedly drove the regreening of Kenya's rural areas.  In 2002, she was elected to Kenya's parliament.

All this from a woman who would not accept the role she'd been cast in, would not simply sit back and weep over the way things are.  Maathai never gave up on her vision, and because of that, she overturned generations of repression and sexism and environmental degradation.

No, she didn't eradicate those things entirely.  Kenya, and the rest of the world, still has a long way to go.  Yet Maathai never let the pitfalls and backslides get in the way of her belief that humans are fundamentally good, and the world is worth saving.  When she died in 2011 at the age of 71, she had accomplished more than most of us would in ten lifetimes -- all through being steadfast and brave and, most importantly, not accepting that the status quo was inevitable.

She remained, to the end, modest about what she'd done.  Any of us, Maathai said, could do the same; all it takes is a vision and sufficient courage.  "I don't really know why I care so much," Maathai said.  "I just have something inside me that tells me that there is a problem, and I have got to do something about it...  It's the little things citizens do.  That's what will make the difference."

She smiled, and added, "My little thing is planting trees."
Posted by Gordon Bonnet at 2:57 AM