You're a mean one, Mr. Grunch

I grew up in Bayou Country, the Cajun heartland south of Lafayette, Louisiana.  My mom's family was Cajun to the bone, descended from a group of exiled Nova Scotia French who had been there in those swamps for over 200 years.

Cajun folklore is fascinating, and the tales and legends preserve a memory of times long past.  My maternal uncle, who was a fine storyteller, used to scare the hell out of us kids with stories (told in French) of the loup-garou (the Louisiana answer to werewolves) and the feu follet, or "crazy fire," a forest spirit that would lure you in with dancing lights and then steal your soul.  (The only way to escape was to run away and jump across a creek -- the feu follet was unable to cross running water.)

I grew up well-versed in the terrifying legends of the swamps, having not only the family background but a taste for such paranormal scary stuff.  So imagine my surprise when just yesterday I found about a south Louisiana cryptid that I'd never heard of before: 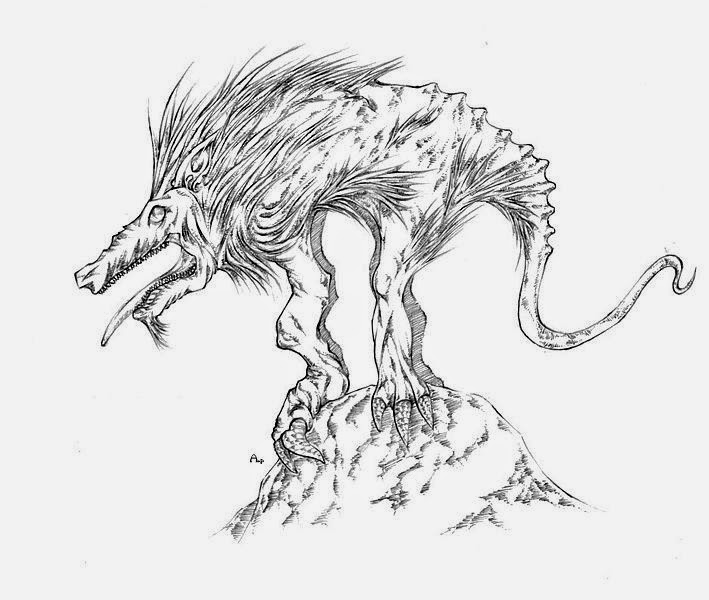 [image courtesy of artist Alvin Padayachee and the Wikimedia Commons]

Yes, I know, "grunch" doesn't sound all that authentic south-Louisiana-French.  At least it should be "grunché," or something.  But no, it's the "grunch," and apparently it's sort of a Deep South version of El Chupacabra.  Here's what "Gina Lanier, Paranormal Investigator" has to say about it:


As a principal port, New Orleans had the major role of any city during the antebellum era in the slave trade.  Its port handled huge quantities of goods for export from the interior and import from other countries to be traded up the Mississippi River.  The river was filled with steamboats, flatboats and sailing ships.  At the same time, it had the most prosperous community of free persons of color in the South. Many old stories from people who's [sic] family were around at the time have passed many oral traditions down to us concerning the Grunch.  Legend has it that the Grunch dates back to the days of New Orlean's [sic] early settlement and that its name ''Grunch'' comes from the name of a road.

So where did the the creature come from?  Was it always there, grunching about in the swamp?  No, Lanier said.  The grunch was created by the Voodoo Queen cutting off Satan's son's balls:


This Southern cryptid has been called The Vampire of Farbourgh [sic: she means Faubourg] Marigny, and Bywater area dating back to the early 1800's.  The Legend of Marie Laveau tells of how some believe this form of chupacabra came into existence.

An old Voodoo Hoodoo story says Marie Laveau castrated the Devil Baby when he was born.  Because she wanted him to produce no more of his evil kind.  The two bloody testicles fell to the floor as she used a very sharp hoodoo voodoo blade.  Immediately they turned into a male and female grunch, who it is said actually attacked the great Voodoo Queen Marie Laveau.  The grunch are said to have almost killed her with their fierce bites and punching.  The dark evil terror the old Voodoo Queen must have been unbearable as she struggled under their great strength before she fainted.  When she awoke the Grunch and the Devil Baby were gone.  Laveau was near death after this and many have said this is when Marie Laveau gave up her Voodoo Hoodoo ways and went back to being a good Catholic woman.

Well, it's a good story, but all that voodoo hoodoo stuff sounds like doodoo to me.  As you probably figured I'd say.  Marie Laveau was a real person, though; her tomb is in the historic St. Louis Cemetery in the French Quarter, and is a tourist attraction (especially given the fact that devotees still place gifts on her grave).

But the rest of it sounds like your usual silliness.  Of course, this hasn't stopped (un)reality TV from latching onto it, as they are wont to do.  The very first episode of the Destination: America series "Swamp Monsters," in fact, is called "The Grunch."  Here's the description of the episode:


In the mystical lagoons, marshes and swamps of Louisiana’s bayou, Elliot Guidry and his team of BEAST (the Bayou Enforcement Agency on Supernatural Threats) battle the elements while tracking down a pack of the infamous Grunch.  Born of the Devil himself, the Grunch have been terrorizing Louisiana residents for centuries.  These skin and bones, dog-like creatures have ridged backs, stand three feet tall and emit a horrible screech. After following these monsters into the middle of the swamp,  BEAST realizes that the hunter has become the hunted as they’re surrounded by a hungry pack of Grunch.

I commented, in a previous post, that if ever I founded a punk band, I was gonna call it "Government Death Plague."  Now I can add that if I ever found an alternative band, I'm gonna call it "Pack of Grunch."

(You can watch the entire episode for free here, if you don't mind giving BEAST forty minutes of your life that you'll never, ever get back.)

Anyhow.  Predictably, I think the whole thing is easily explained by wild dogs and wilder imaginations.  No need for voodoo hoodoo and devil baby balls.  I still am kind of surprised I never heard about this, growing up; I certainly had an ear for such tales, and more than one family member who was willing to pass along anything that was useful for scaring kids to the near bedwetting stage.  The fact that I grew up down there and never got wind of grunches is a little like the fact that it wasn't until I moved to Seattle that I first heard of cooking "blackened pork chops" and "blackened fish" and so on, a culinary technique that allegedly comes from southern Louisiana.  The only time my mom served anything blackened was when she put a chicken in the oven to roast and got distracted by a neighbor, and only took it out when it was somewhere between overdone and charcoal.  (My dad teased her for weeks about having created a new gourmet dish, "poulet noir.")

But who knows?  I may just have missed that one.  In any case, if you're down in the bayou, you now have an additional thing to worry about, over and above cottonmouths and alligators, not to mention the feu follet and loup-garou.  I wouldn't let it stop me from going there, though.  It's a beautiful place, with great music and even better food, and if I lived there for over twenty years without being attacked by a pack of grunch, I'm guessing you're safe enough.
Posted by Gordon Bonnet at 3:02 AM