One has to wonder what people get from forecasting the end of the world.

Because some people are really into this.  You've got your religious/End Times Crowd, but they're not the only ones.  There's the We're All Going To Die In An Epidemic Cadre, the Yellowstone Supervolcano Will End Life As We Know It Club, and the ever-present Economic Collapse Will Result In Global War Association.

And is it just me, or do these people seem kind of... happy about the whole idea?

Me, I'm not so thrilled by the prospect.  It's not that life is perfect, but hell, I'll take what I have over everyone in the country dying of Ebola, or being smothered by a giant ash cloud, or even the rivers running red with the blood of unbelievers.

And of course, those aren't the only ways the world could end.  Massive earthquakes, tsunamis, even alien invasions could do the trick.  And if that's not enough, we now have an article bouncing about in the social media that claims that we're all about to die...

... in an asteroid collision. 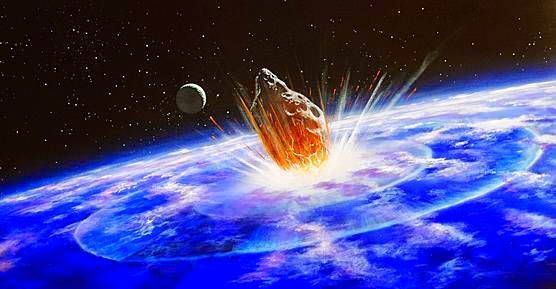 The site Cosmos Up, which sounds more reputable than it actually turns out to be, ran an article last week called "Dangerous Asteroid Rapidly Approaching Earth?" in which we find out that the euphoniously-named 2014 UR116 is about to play a cosmic game of Whack-a-Mole with the Earth.  Here's how they describe it.  Grammar and spelling is as-written, so you can get the overall charming effect of the original:


A large asteroid named 2014 UR116 is moving into an orbit, most likely involving a collision with Earth. Asteroid flies inside the solar system.

His route is similar to the trajectory of the Chelyabinsk meteorite. He flies by planet, Venus and Mars, and is a real danger for the inhabitants of the earth.

He does that, does he?  I'm scared already.


Russia’s only network of robotic telescopes MASTER created by Lomonosov Moscow State University University in collaboration with the three domestic universities (Ekaterinburg, Irkutsk and Blagoveshchensk), Kislovodsk Station of the Pulkovo Observatory RAS and the University of San Juan (Argentina), an asteroid discovered in 2014 UR116, – more than 300 meters in diameter – which can collide with the Earth. This was reported by the laboratory site space monitoring MSU.

So far, sounds at least vaguely scientific.  But then, the author goes on to tell us the following:

It's going to collide with the Earth and Mars and Venus?  One right after the other, or something?  On the other hand, if they mean that we can't tell which one it's going to hit, that's kind of a high uncertainty value.  According to the site Wolfram Alpha, the current distance between Earth and Mars is 157.9 million miles.  If that's the size of the error bars in their trajectory calculations, I'll take my chances, you know?

But of course, "We Don't Know And It Probably Won't Hit The Earth, But Even So, It's A Pretty Big Chunk Of Space Rock" doesn't make nearly as snappy a headline as "Dangerous Asteroid Rapidly Approaching Earth."

Still, you have to wonder why the people currently forwarding this article on Twitter and Facebook seem so... cheery about the whole thing.  Myself, I think that being at ground zero of an asteroid strike would be unpleasant, at least during the 2.8 nanoseconds before I was vaporized by the impact. You'd think people would be circulating articles saying, "Hey, Isn't It Cool That We've Found Another Asteroid That Won't Hit Us?" instead of articles saying "Fuck, We're All Gonna Die."

Yet another way in which I don't get human nature.  I'll add it to the list.