So most of you have probably been following the amazing landing of Philae, from the Rosetta comet study mission, on the comet 67-P Churyumov-Gerasimenko.  It was a triumph of technology -- hitting a four-kilometer-wide target traveling at over 100,000 km/hr from 500,000,000 kilometers away.  Unfortunately, the landing site proved problematic; Philae is apparently in shadow, and its solar cells have been unable to charge the batteries, resulting in a loss of transmission.  There's still hope that as the comet approaches its perihelion, the lander may be exposed to enough light to start functioning again; but at the moment, it's out of commission.

All of which has the conspiracy theorists in a lather.

I should have been expecting this.  They've always had a bee in their bonnet about NASA, whom they suspect of being in collusion with aliens and the Illuminati and heaven knows who (or what) else.  Never mind that Rosetta was a mission from the European Space Agency, not NASA; facts have never mattered much to these folks.

But now we have allegations that the ESA (working with evil, evil NASA) is hiding the mission's true purpose.  In an email, allegedly from an ESA whistleblower, we read:


Do not think for one moment that a space agency would suddenly decide to spend billions of dollars to build and send a spacecraft on a 12-year journey to simply take some close-up images of a randomly picked out comet floating in space.  Comet 67P is not a comet…  Some 20 years ago NASA began detecting radio bursts from an unknown origin out in space…  It would later be known that these had likely come from the direction of the now named comet 67P.

Mmm-hmm.  I've looked at the photographs that came in before the lander died, and they look pretty much like random dirty ice to me.  Which, coincidentally enough, is what comets are made of. 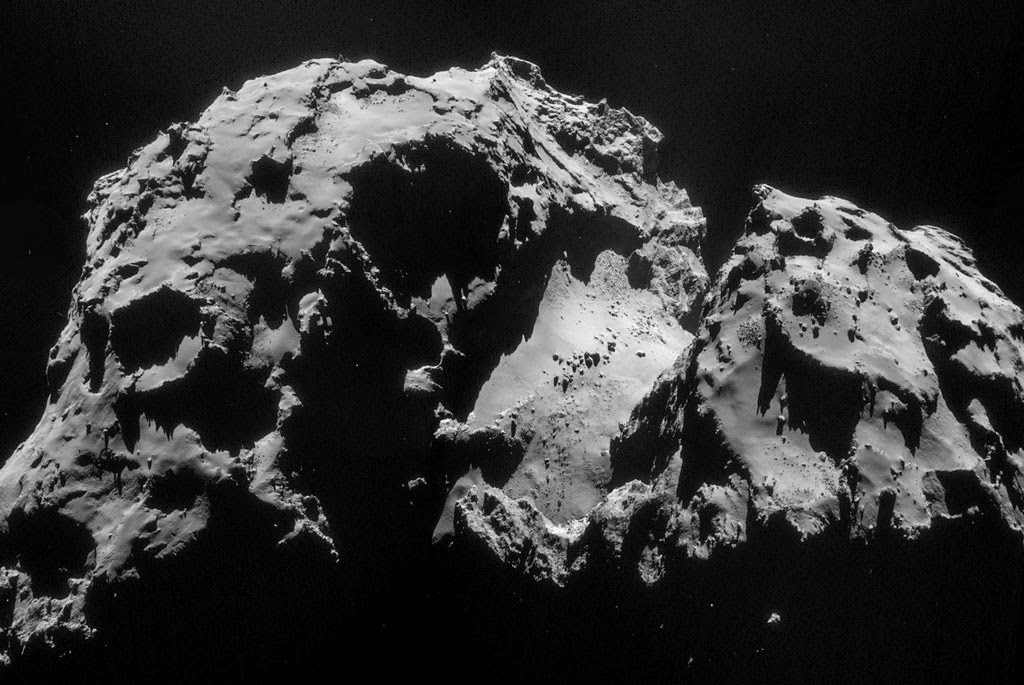 The whole thing reached another level of silliness when it was announced that the comet was "singing."  The scientists, who would probably be happier not to have their research characterized this way in the media, found that the comet's magnetic field was oscillating at about 40 millihertz, and  after speeding it up by a factor of 10,000, it can be turned into a sound audible to human ears.  The oscillation is still unexplained, but is thought to be an effect caused by ionized particles interacting with the solar wind.

Hoo boy.  An unexplained "song," plus a mission to a comet, plus a good imagination, and you have the makings of a great conspiracy theory.  Scott Waring, who has made Skeptophilia before for his claims that there are alien bases on the Moon and that a digital photographic glitch from a NASA photograph of the Sun proved that a huge cubical alien spaceship was harvesting the Sun's energy, has weighed in thusly:


In my opinion, this is not a code. It is how a species of aliens communicate to one another without speaking — [something like a] form of telepathy put into primitive radio signals … It's the only way this species can communicate to us.  This is their thoughts [because] they don’t talk.  Is it a message of greetings, or is it a warning of what’s to come?  We, the people of the world, need to find out.

Well, if it's a message, the aliens need to work on their language skills.  You can listen to the "song" here.  Remember: this is sped up by a factor of 10,000, so whatever this bit of the "alien communication" is, it would take ten thousand times longer to listen to if you played it at its actual speed.

And, of course, the failure of the lander's batteries has added a whole extra layer of suspicion.  No way would scientists design a multi-million-dollar probe that could so easily lose contact.  It's still transmitting, say the conspiracy theorists; but what it's sending back is so shocking that the scientists don't want us to know about it.  You know, aliens and spaceships and whatnot.

What's funny about all of this is that if there really is this great big conspiracy, covering up First Contact with an alien race, the head honchos at NASA and the ESA are being pretty sloppy about it.  First they make the mission public, with thousands of press releases and so on; they post photographs of the comet all over the place.  Then they make the unfortunate announcement of the lander's radio silence.

Why go through all of these gyrations, when they could just have launched the thing in secret in the first place, and not told us anything about it?  It's not like some amateur astronomer is going to look through his backyard telescope and see Philae sitting on the surface of the comet, or anything.

So if these people are in a conspiracy, they should resign and let someone take over who actually knows how to run one.  Because they're kind of an embarrassment.  Will Smith and Tommy Lee Jones did a much better job in Men in Black, with their little memory-wipe devices.  Also, those were some cool alien languages.  I'd learn to speak those, if I could make noises like that.