Adding to the long list of scientific words that woo-woos misdefine and then misapply, let's consider "dimension."

It's rising in popularity, and may soon outstrip "quantum" and "vibration" and "frequency," hard though that may be to believe.

Its misuse, of course, goes back a long way.  In fact, my wife recently got me the first season of the classic (i.e., terrible) science fiction series Lost In Space for my birthday, a move she has lived to regret, because our son Nathan and I now constantly quote memorable lines from it, such as, "Would you like another serving of Space Pie?" and "Golly!  They've turned him into a Cave Robot!"

But the subject comes up because of an episode we watched just a couple of days ago, called "Invaders from the Fifth Dimension."  In this wonderful piece of sf cinematography, we meet a pair of aliens who look a little like the love children of John Kerry and Karl Rove: 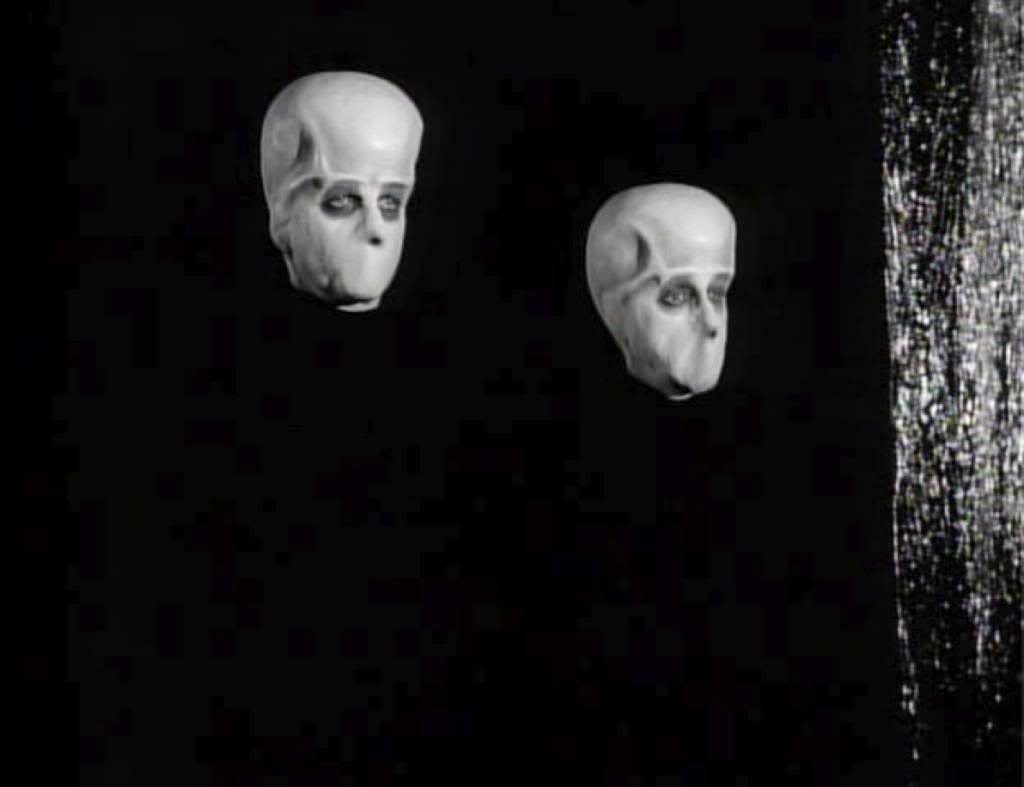 These aliens are ultra-powerful because they come from the fifth dimension, we're told, and have made their spaceship impregnable by using a "fifth-dimensional force field."  Even so, they're no match for Will Robinson, who makes their spaceship blow up by, basically, feeling sad at them.

I'm not making this up.

In any case, this illustrates how the incorrect use of the word "dimension" isn't of recent vintage.  Back then, but lo unto this very day, woo-woos have somehow thought that "dimension" was a fancy way of saying "place," and that therefore a creature could "come from another dimension."

Take, for example, the piece that appeared a while back over at Before It's News called "Inter-Dimensional Invasion Begins," wherein we learn that because "dimension" means "place," creatures can come from "between dimensions," just as you could say, for example, that you lived between Hoboken and Weehawken, even though you might not want to brag about that fact.

In this article, we're told that "when studying for his B.Sc. in physics," the author learned about string theory, which posits up to eleven spatial dimensions.  This, he says, opens the door for all sorts of weird stuff:


All events ever experienced by humans throughout history either from the mundane to the extraordinary have at best been reported or recorded using the language of 4 dimensions. 3 spatial (X,Y,Z) and one temporal (time).

That leaves at least 7 dimensions that we are only dimly aware of. If at all. Most people intrinsically understand the spatial dimensions (X,Y, and Z) , it is the structure of all our movements , all the things in which we interact with , it is our life’s experiential structure. But Time is also a dimension, albeit times arrow only runs in one direction under normal Newtonian situations. But it is a dimension none-the-less. It is a axis of freedom in which we move, ever trudging forward ceaselessly. To quote William Shakespeare “Time is the fire in which we burn”. What sort of experiences and entities burn in the higher 7 dimensions?

Right!  Whatever the hell that even means.

Later, though, he answers the question, of course.  Those extra dimensions provide a place for Bigfoot to hide:


I believe that all forms of what we call “Paranormal” is normal, maybe just not in our 4 dimensional reality. The “Inter-dimensional Hypothesis” states that UFOs, aliens, shadow people, crop circles, Bigfoot, and ghostly activity are all explained by the passage of beings from another dimension occasionally crossing into our dimension and being witnessed. The method of cross overs are not understood at this time by science.

Okay, can we just hang on a moment, here?

The trouble I have with people like this is not only do they not understand science, they can't, apparently, even read a fucking Wikipedia page.  Because if you go to Wikipedia, and search for "Dimension," you are brought to a page wherein we are given, right in the first paragraph, the following definition:

So saying that UFOs come from the seventh dimension is a little like saying that your Uncle Steve comes from "horizontal."

Higher dimensional spaces may exist, of course, although that point is controversial.  The alleged physics student who wrote the article for Before It's News cited string theory and M-theory as support for his position, even though the very same Wikipedia article says the following:


In physics, three dimensions of space and one of time is the accepted norm.  However, there are theories that attempt to unify the four fundamental forces by introducing more dimensions.  Most notably, superstring theory requires 10 spacetime dimensions, and originates from a more fundamental 11-dimensional theory tentatively called M-theory which subsumes five previously distinct superstring theories.  To date, no experimental or observational evidence is available to confirm the existence of these extra dimensions.  If extra dimensions exist, they must be hidden from us by some physical mechanism.  One well-studied possibility is that the extra dimensions may be "curled up" at such tiny scales as to be effectively invisible to current experiments.

So if Bigfoot lives there, he's not so much Bigfoot as he is Submicroscopicfoot.

Anyhow.  I'll just reiterate my wish that people would learn some basic science before they go blathering on, throwing around scientific terminology as if they actually knew what they were talking about.  As for me, I'm off to get a second cup of coffee.  Maybe if I can put some in a four-dimensional Klein bottle, I'll never run out, you think?
Posted by Gordon Bonnet at 3:53 AM