If you're near Monmouth, Illinois this weekend, you should see if you can drop by the fall meeting of the American Physical Society, being held in Pattee Auditorium at Monmouth College, at 5 PM on Saturday

Why?  Because a guy is going to give a talk to a bunch of physicists about... well, let me just let you read the abstract:


Analysis of recent Mars isotopic, gamma ray, and imaging data supports the hypothesis that perhaps two immense thermonuclear explosions occurred on Mars in the distant past and these explosions were targeted on sites of previously reported artifacts. Analysis rules out large unstable "natural nuclear reactors'' [1], instead, data is consistent with mixed fusion-fission explosions [2]. Imagery at the radioactive centers of the explosions shows no craters, consistent with "airbursts.'' Explosions appear correlated with the sites of reported artifacts at Cydonia Mensa and Galaxias Chaos [3], Analysis of new images from Odyssey, MRO and Mars Express orbiters now show strong evidence of eroded archeological objects at these sites. Taken together, the data requires that the hypothesis of Mars as the site of an ancient planetary nuclear massacre, must now be considered. Fermi's Paradox, the unexpected silence of the stars, may be solved at Mars. Providentially, we are forewarned of this possible aspect of the cosmos. The author therefore advocates that a human mission to Mars is mounted immediately to maximize knowledge of what occurred.\\[4pt] [1] J. E. Brandenburg ``Evidence for a large Natural, Paleo- Nuclear Reactor on Mars'' 42$^{nd}$ LPSC (2011).\\[0pt] [2] J.E. Brandenburg, "Anomalous Nuclear Events on Mars in the Past'', Mars Society Meeting (2014)\\[0pt] [3] J.E. Brandenburg, Vincent DiPietro, and Gregory Molenaar, (1991) "The Cydonian Hypothesis'' Jou. of Sci. Exp., 5, 1, p1-25.

Yup.  This guy is saying that there used to be civilizations on Mars, but they were wiped out by a nuclear attack. 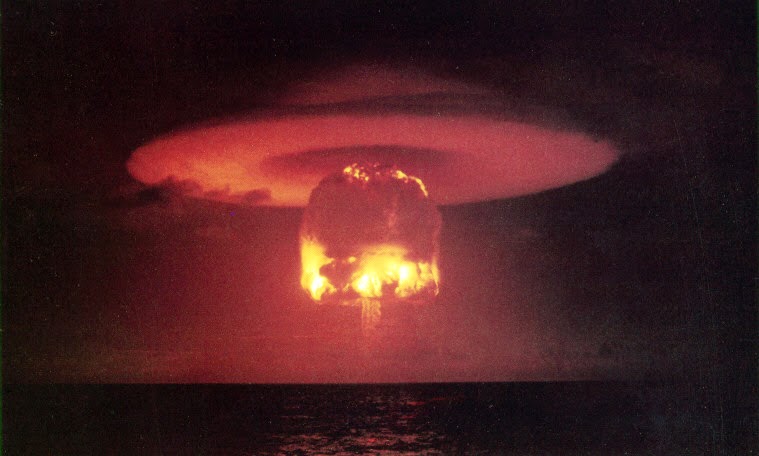 The speaker, John Brandenburg, isn't just some kind of crank, however his theory might suggest that he has a screw loose.  He is a plasma physicist with a Ph.D. from UC-Davis, and apparently prior to this has had a rather distinguished career in research.  How he got off in this direction is a matter of speculation, but what's clear is that he's entirely serious.

His, um, "research" was the subject of a story in Vice last week, and the author, Jason Koebler, was treated to a preprint version of Brandenburg's paper, which concludes thusly:


It is possible the Fermi Paradox means that our interstellar neighborhood contains forces hostile to young, noisy, civilizations such as ourselves," he added. "Such hostile forces could range from things as alien as AI (Artificial Intelligence) ‘with a grudge’ against flesh and blood, as in the movie Terminator, all the way to things as sadly familiar to us as a mindless humanoid bureaucrat like Governor Tarkin in Star Wars, eager to destroy planet Alderaan as an example to other worlds.

Yes, Brandenburg did just end an academic paper with a conclusion that cited as evidence not one, but two, science fiction movies.

Of course, NASA and associated scientific researchers think this whole thing is nonsense.  The alleged "archaeological objects" are natural geological features, not the ruins of buildings.  There is no evidence whatsoever of intelligent life ever having existed on Mars, as cool as that would be.

But of course, the conspiracy theorists beg to differ.  They just love the fact that an actual scientist is proposing all of this.  Partly it's because they automatically approve of anyone who is seen as an iconoclast; and partly it's because before you can get your Conspiracy Theorists' Society membership card, you have to sign a pledge to disbelieve everything that NASA says.  So Brandenburg has scored a twofer, here, and it's no wonder that he's the new hero of the conspiracy world.  You should go to Koebler's article (linked above), because he has actual excerpts from various conspiracy websites that have to be read to be believed, and about which I will only say the following: 1) NASA has, as its primary function, protecting us from alien nuclear bombs from space; and 2) the movie Stargate was not fiction.

So there you have it.  A man who is apparently a loon giving a talk at an actual convention of scientists.  I would love to be there to see their reaction.  I wonder if it's considered impolite to burst into guffaws at an academic talk?

Posted by Gordon Bonnet at 2:39 AM