Orgone to the rescue

Are you worried about the New World Order?  Do you fear that the Reptilians are powerful enough to infiltrate the government unchallenged?  Do you look up at passing jets and fret about the toxic stuff in the chemtrails they leave behind?  Are you terrified that we might be attacked by zombies?

Fear not, for we have a great weapon at our disposal.  These assorted bad guys are no match for the...

Yes, "orgone," the completely nonexistent "universal life force" proposed by Wilhelm Reich all the way back in the 1930s.  Reich and others went through all sorts of gyrations to try to prove it existed, to no avail.  Also to no particular diminishment of their claiming that "orgone" was the magical be-all-and-end-all of the universe, influencing everything from weather patterns to the motion of galaxies to the "psychosexual energy release" experienced during orgasm.

Reich even developed an "orgone accumulator box" that seems to have done nothing but give test subjects a nice place to nap for a few minutes. 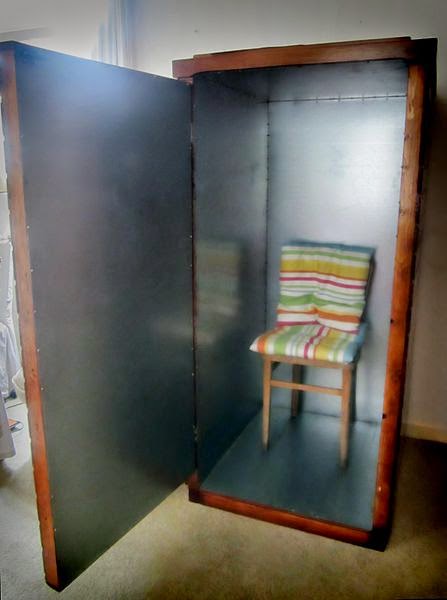 You'd think that the fact that no one has ever been able to demonstrate that orgone exists would put a damper on people's claims involving its mystical properties.

The site I linked above, written by one Sherry Shriner, would be the odds-on favorite in a competition for the Most Quotable Woo-Woo Website.  It tells us that not only does orgone exist, it can be used as a first line of defense against... well, everything.  If the Illuminati do anything, all we have to do is focus our orgone on 'em, and they'll retreat in disarray like the sorry sonsabitches they are.  But don't just take it from me, here's a direct quote from the website:


My Orgone has destroyed the Capricorn Star-Ship, the Shema star-ship, Planet X - Comet Elenin, and thousands of UFOs!

It Works Folks! It's the Only thing that works against Alien-Demonic-Zombie-Vampire- beings! The "dead" hate it! The Aliens hate it! Politicians who have been soul-scalped by Reptilians hate it! Obama hates the White House, Michelle sleeps in Hotels around D.C...the White House Senior Staff meets in air-sealed rooms under the Capitol...why?? Because they HATE the Orgoned air in D.C. !!

Orgone will cleanse your air/water/food, dissolve chemtrails above your home, keep evil beings out of your home and yard, stop night terrors, it has 101 uses.

Yup.  If you ever are threatened by alien demonic zombie vampire beings, you now have your answer.

You can "orgone" water, too, she says, and shows a photograph of what appears to be a SuperSoaker. I pictured the people in The Walking Dead fighting off zombies with water pistols, and the image was so strangely hilarious that I had to put my head down on my desk for a while.

But in the parlance of the infomercial... "Wait!  There's more!"


The average OB (Orgone Blaster) can neutralize the evil effects of a [cellphone] tower! Not only that, those who are using them are finding that they are neutralizing chemtrails as well!! Not only that, they will repel anything evil and keep it away from your yard, home and family!! Unwanted aliens and demons on your property? No problem bury a few of our OBs at each corner of your property!


We also find out that these things kill viruses, stop thunderstorms and tornadoes, get rid of migraines, helps you sleep, and "lower utility bills... and even lower gas mileage if you put one of them by your engine!"

Because, you know, we all want lower gas mileage.

Other features on the page include references to the Antichrist and the Book of Revelation, angels, and the Protocols of the Elders of Zion.  I mean, the phrase "no stone unturned" could have been coined by someone taking a look at this website.

Going to the "order page" tells us how to get a hold of these amazing devices, which look like little blobs of gray modeling clay.  You have your small blobs, which are $10 each (special discount -- get 20 of 'em for only $200!).  Large ones are $20, or 10 for $220, proving that whatever "orgone blasters" do in the way of repelling zombies, they do nothing for improving your math skills.

Now, I'm sure you're all wondering if I've been bitten on the ass by Poe's Law once again, and let me assure you that this is not satire.  In fact, this is not Shriner's first appearance in Skeptophilia -- earlier this year we considered her claim that we're all being controlled by government-implanted microchips, but we can neutralize them using magnets.  She made the International Skeptics' Forum back in 2007, in a posting called "Sherry Shriner, Woo Extraordinaire... at last, we have found a website with everything."

So much as you might think that no one could possibly believe this stuff, the website has every indication of being completely serious.  As for Shriner herself, she is well regarded enough in the woo-woo world that she was interviewed over at Strange Frequencies (for a not-to-be-missed transcript of the interview, go here).

So there you have it.  If you're worried about... well, anything, you've found your answer.  Myself, I'm going to save my money.  I figure that if there are that many evil Illuminati bad guys in the world, I'm probably going to be better off applying for membership than trying to fight them off 24/7.
Posted by Gordon Bonnet at 4:43 AM