Because the universe has a peculiar sense of humor sometimes, my post considering the misapplication of the scientific term "dimension" was followed up nearly instantaneously by my stumbling upon an article called "The Dimenionality [sic] of Cthulhu."

Yes, Cthulhu, as in the octopoid monster-god in the mythos of H. P. Lovecraft.  The article was posted a couple of days ago on a blog entitled "Lovecraftian Science: Scientific Investigations Into the Cthulhu Mythos."  When I happened upon it, I thought at first that this was just an example of a scientist having a little bit of fun, much the way legitimate historians will play around with analysis of the timeline and backstory of The Lord of the Rings.  But upon reading the entire entry, and several other posts besides, at the cost of countless brain cells in my pre-frontal cortex which cried out piteously as they dissolved into the amorphous, bubbling nether-slime of the darkest eldritch reaches of time and space, I have come to the conclusion that this dude is actually serious. 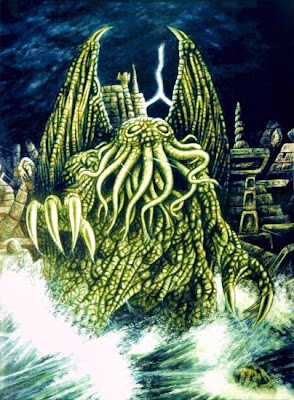 [image courtesy of artist Dominique Signoret and the Wikimedia Commons]

Consider, for example, the following passage:


Based on... references made by HPL, Cthulhu and its spawn are not from our space-time continuum. This explains how these entities can function beyond the confines of our physical laws, such as its fluid movement and apparent plasma-like structure. Indeed, further study of Cthulhu and its spawn may provide the evidence needed to support the M-theory.

Yes, M-theory, that impossibly abstruse mathematical construct that attempts to unify all consistent string theoretical models of quantum gravity.  The introduction to the Wikipedia article on the topic, which despite my bachelor's degree in physics represents the limit of my understanding of the subject, says the following:


Investigations of the mathematical structure of M-theory have spawned a number of important theoretical results in physics and mathematics. More speculatively, M-theory may provide a framework for developing a unified theory of all of the fundamental forces of nature.

"Spawned."  Sounds like a Cthulhu reference already.  So there you are, then.

The author of the article apparently agrees.  He goes on to say:


M-theory describes a reality of vibrating strings, point particles, two-dimensional membranes, three-dimensional blobs and other multi-dimensional objects we can not perceive (Hawking and Mlodinow; 2010).  In fact, M-theory allows for many different internal spaces – as many as 10500 different universes, each one with their own particular set of laws of nature. Is Cthulhu and its spawn from one of these universes?  Did this entity find a means of exuding itself into our universe, bringing with it R’lyeh, with some of its native laws of nature seeping into our universe?

Yes.  He actually cited Stephen Hawking in order to explain why R'lyeh is such a crazy-ass place.

He concludes with a teaser:

So there may be a way to stop these monsters!  Hallelujah!  Alert Henry Armitage!  Wilbur Whateley is going down!

Ahem.  Yeah.  What's funniest about all of this is that Lovecraft himself was a staunch rationalist.  He used to reply to the fans who wrote to him, asking for directions to Dunwich or Innsmouth, "Those places do not exist.  I know that for certain.  You see, I made them up."  This didn't stop people from looking, of course, and it spawned (there's that word again) theories that he was covering up his knowledge to protect himself from retribution by the Abominable Mi-Go, or whatever.  (In fact, I riffed on that very idea in my short story "She Sells Seashells," which, should you choose to read it, I should point out is fiction as well.)

And apparently there are people who are sold enough on his worldview that they'd like to use it to prove string theory.  Or vice-versa, I'm not sure.  Which is also kind of peculiar, because besides Lovecraft's fictional universe being a pretty bleak place, he was also a raving racist, a feature that pops out with cringe-worthy regularity in his stories.  (So while I count him amongst the inspirations for my own writing, I can't really in good conscience read about half of what he wrote.)

Anyhow.  That's our excursion into the Deep Places for today, and I'm off to get some coffee and then to fight my way through the Insanely Gibbering Hordes that populate the Loathsome Monolith-Crowned Citadel where I shall reside in Nuclear Chaos Until The End Of Time.

Better known as my classroom.
Posted by Gordon Bonnet at 2:41 AM