Ready for a convoluted story?

Today's journey is about the twistiest trip through mythology, fakery, and pseudohistory I have ever seen, linking the Vikings, the Templars, 1st century Judea, and a farm in Maine.  It's the story of the Spirit Pond runestones, an alleged pre-Columbian runic inscription that one guy thinks proves that the Native Americans of the northeastern United States are direct descendants of Jesus Christ.

So pop yourself some popcorn, sit back, and let me tell you a tall tale.

In 1971, Walter Elliott, a carpenter from Phippsburg, Maine, claimed that he had found a stone with some odd inscriptions near a place called Spirit Pond.  The inscriptions, he said, looked like Norse runes, so could this possibly be proof that the Norse explorers of the 11th century, especially Leif Eriksson and Thorfinn Karlsefni, had made their way to New England? 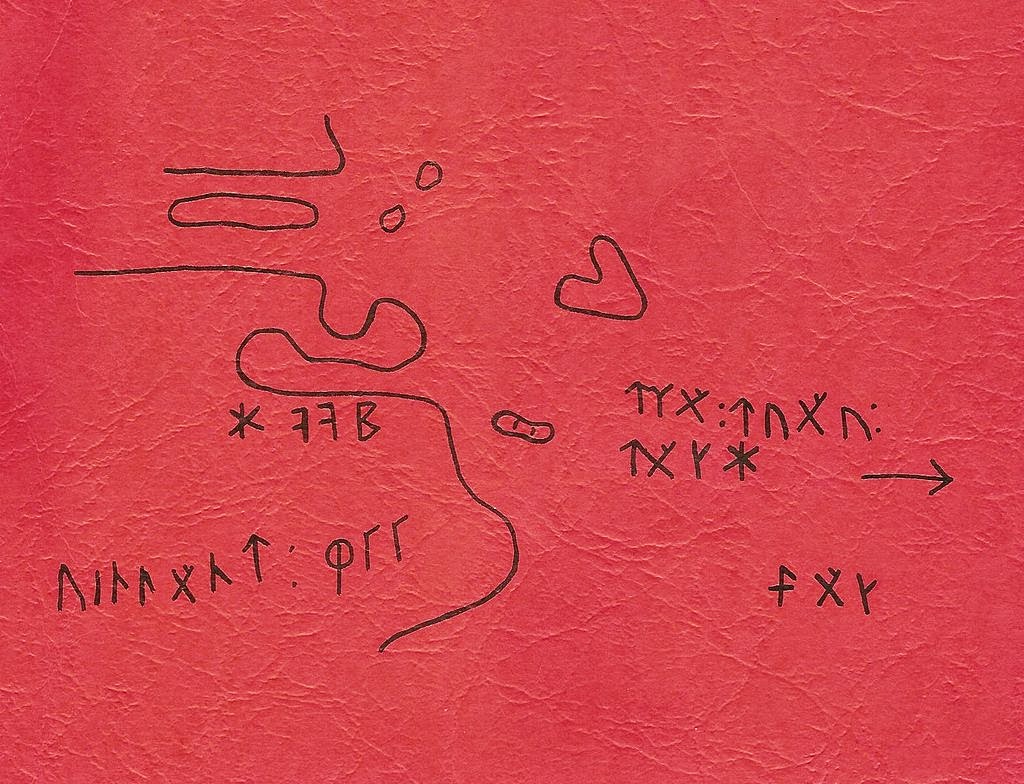 The claim came to the attention of Einar Haugen, Harvard University professor of linguistics, and one of the world's experts on Norse runes.  Haugen pronounced the inscription a fake, claiming that the inscription has "a few Norse words in a sea of gibberish."  Specifically, he said that the use of the "hooked X" or "stung A" character (it can be seen in the top right word above, the second character from the right) was inconsistent with verified 11th century Norse inscriptions, and in fact was eerily similar to the inscription on the Kensington runestone, found in Minnesota in 1898, which is universally considered to be a modern fake.

Pretty decisive, no?  But as we've seen over and over, a silly old Ph.D. and professorship in a subject doesn't mean that amateurs can't know more.  So the Spirit Pond stone has gained quite a following amongst the Vikings-in-the-Americas crowd.

And as we've also seen, there is no wild theory that can't be made even more bizarre.

Enter geologist Scott Wolter.  Wolter thinks that the Spirit Pond runestone is a genuine archaeological find, but it doesn't mean what its finder claimed -- that it was proof that Eriksson, Karlsefni, et al. had made it to North America in the 11th century.  He claims that it was brought to what is now Maine in the 14th century...

... by the Knights Templar.

Yes, the Knights Templar, that fertile source of speculation for aficionados of secret societies, which was forcefully disbanded in 1314 and has spawned wacky conspiracy theories ever since.  The Templars ran afoul of the powers-that-be, especially Pope Clement V and King Philip IV of France, mostly because of their money, power, and influence, and Clement and Philip had the leaders arrested on trumped-up charges of sorcery.  (To be fair, some of their rituals were pretty bizarre.)  Templars who weren't willing to confess -- and this included their head, Jacques de Molay -- were burned at the stake.

So, so much for the Templars.  Except for the aforementioned conspiracy theories, of course, which suggest that the main body of the Templars escaped, letting de Molay take the fall (some say de Molay willingly sacrificed himself to let the others get away).  But the question remained; get away to where?

Scott Wolter has the answer.

To Maine, of course.

So they sailed across the Atlantic Ocean to Maine, bringing along Cistercian monks who (for some reason) wrote in Norse runes, and the monks inscribed the Spirit Pond stone.  And Wolter says he knows what the runic inscription means.  Haugen, and other so-called experts, are wrong to say it's gibberish.  The Spirit Pond stone is an incredibly important artifact because it tells how the Templars came to North America, bringing with them the Holy Grail.

And you thought that its final resting place was the "Castle Arrrrggggghhh."

But that's another mistake people make, Wolter said.  The "San Greal" -- Holy Grail -- is actually a mistranscription of "Sang Real" -- meaning "royal blood."  In other words, the bloodline of Jesus.  Which means that the Templars were Jesus's direct descendants.  So they arrived in Maine, carrying the Sang Real, and proceeded to have lots of sex with Native women, meaning that the Native inhabitants of eastern North America are descended from Jesus Christ.

All of this is just jolly news for me, because I am descended through my mom from various members of the Micmac and Maliseet tribes of New Brunswick and Nova Scotia.  So here's yet another branch I can add to my family tree.

Of course, the linguistic world isn't paying this much attention, which pisses Wolter right off.  "These archaeologists have all been programmed [to believe the stones are fakes] and they can’t think outside the box," he said.

Well, sorry, Mr. Wolter.  "Decades of scholarly study" does not equal being "programmed," it equals "knowing what you're talking about."  Haugen's work in the field of Norse linguistics is the epitome of careful research and thorough study.  So I'm not ready to jettison his expertise because you'd like the northeastern Natives to be Jesus's great-great-great (etc.) grandchildren.

In any case, I hope you've enjoyed today's journey through time.  It's not bad as fiction; kind of the bastard child of The DaVinci Code and Foucault's Pendulum.  But as a real historical claim, it's a bit of a non-starter.
Posted by Gordon Bonnet at 2:58 AM