Secrets of the pyramids

Just to let you know that I'm taking a couple of days off for Thanksgiving.  So there won't be any posts for the rest of the week, as I'll be in a turkey-induced coma.  Don't worry, though... I'll be back in the saddle on Monday, December 1, so keep those cards & letters coming.

And for my American readers, enjoy your holiday!

What is it with people thinking that pyramids are magical?

I knew a woman a long time ago who was so convinced that there was something special about a square and four equilateral triangles that she built one by hot-gluing together some dowels.  Then she'd store her apples and bananas under it, and told everyone how much longer they stayed unspoiled than if the fruit was just sitting on her counter.

And lo, over at the Self Empowerment and Development Centre, we find out why this is:


Pyramids don't kill bacteria. However the bacteria feed by absorbing nutrients as entropy breaks the tissues down. In a pyramid there is so little entropy that the bacteria barely survive and don't multiply prolifically. Food therefore stays fresher longer and has a chance to dehydrate before it goes bad.

Other claims include the idea that pyramids act as a giant "cosmic battery," that sleeping underneath a pyramid can cure illness (or at least alleviate insomnia), and that placing a dull razor blade under a pyramid will re-sharpen it.

The whole thing has gotten so much traction that it actually made Mythbusters.  They tested a bunch of these claims, with a certified pyramid made to the exact proportions of the Great Pyramid of Giza, and to no one's particular surprise, none of the claims turned out to be true.

Which makes you wonder why sites like The Secret Power of the Pyramidal Shape still pop up.  This one was sent to me by three different loyal readers of Skeptophilia, and it's quite a read.  The thing I found the most amusing about it was that it had in-source citations, so it looks a little like an academic paper, but when you check the "Sources Cited" you find out that three of them come from the aforementioned Self Empowerment and Development Centre; one comes from a man named David Wilcock, who claims to be the reincarnation of Edgar Cayce; and one of them comes from Above Top Secret.

Not exactly a bibliography that would inspire confidence.

The site itself is worth reading, though, because it has some fairly surreal passages.  Take, for example, this:


The best passive torsion generators are formed by cones or pyramidal shapes built according to the “phi” ratio of 1 to 0.618 and it can, therefore, be said the pyramid shape has the power to harness torsional energy because torsion waves are phi-spirals and for this reason a pyramid will hold positive energy and deflects negative energy wavelengths and therefore inhibit natural decay.

I mean, about the only things that was doing spirals were my eyes after reading that passage.  Torsional energy is well understood by physicists, and has nothing to do with "phi."  But it's unsurprising that it comes up, honestly.  "Phi" is, of course, the Golden Section, about which much mystical nonsense has been written.  It's a pretty cool number, no question about it, and crops up with great regularity in nature; but it doesn't repel "negative energy wavelengths."

We also have some lunar lunacy added to the mix:


Parr has... found that the width of the energy containment bubble or orb expands and contracts with the phases of the moon. This suggests again that the spherical orb on the outside of the pyramid is a static torsion field that gathers around the pyramid and is strengthened by absorbing other dynamic torsion fields.

It was also, apparently, found that a pyramid's "energy field" oscillates at 500 to 1000 hertz.  Should be easy to measure such a phenomenon, right?  I mean, physicists do this sort of thing.  But then we read, "...it was found that every now and then Pyramids quit responding to recordings and measurements."

Then we get a photograph of a Mayan pyramid shooting a beam of light up into the air.  Proof, right? Here's the photograph: 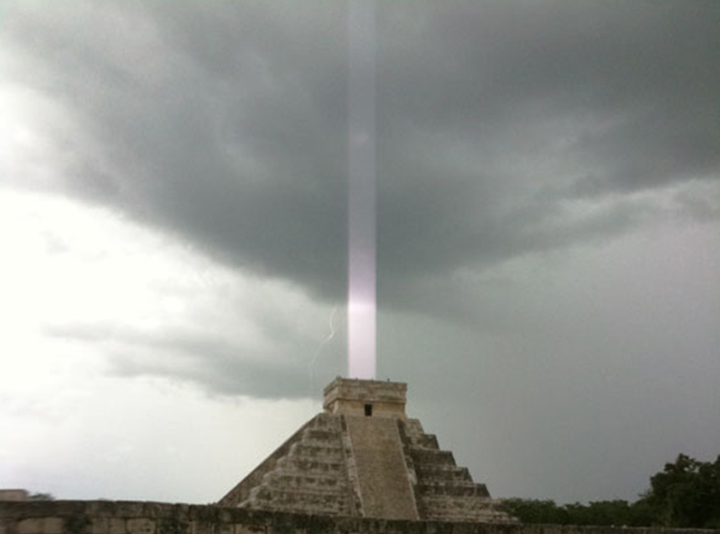 This struck me as especially amusing, because I did a piece on this photograph back in 2012 when it first started making the rounds of the interwebz, and included an analysis by Jonathon Hill, digital image analyst for the Mars Space Flight Facility at Arizona State University.  Hill noticed something odd about the "energy beam" -- that it was perfectly vertical with respect to the image orientation.  Not a single pixel's variation along its entire length on either side, which is pretty odd if it's a natural (or even a supernatural) phenomenon.  (But easily explainable if it's a digital image artifact.)

So even despite Mythbusters and other round debunkings, and the completely lack of scientifically admissible evidence, "pyramid power" is still out there.  I guess there is something kind of special about these archeological sites; I remember being awed by visiting the Jaguar Temple, a Mayan pyramid in Belize.  My sons and I climbed to the top, and it was pretty cool, although we didn't experience any surge of harmonic energies (mostly what I remember is looking down the stairs and thinking "Good lord that is A LONG WAY DOWN").

So don't waste your time putting your fruit under a pyramid.  There's another magical device that is much better at keeping fruit fresh.

It's called a "refrigerator."