Given that most of what I do here at Skeptophilia is to rail against people whose primary form of exercise is jumping to conclusions, it's nice to see that occasionally someone gets it right.

And it is, unfortunately, still only "occasionally" at this point. Popular websites are much more likely to leap from reality right into woo-woo-land over any number of claims, from ghosts to El Chupacabra to demons to Bigfoot to psychics.

But there's a claim out of Macedonia that has stirred up the cryptozoological world, and the folks over at Phantoms and Monsters (of all people...!) are taking exactly the right approach with it.

First, let's look at the claim.

What apparently happened is that a farmer named Trayche, in the village of Novo Selo Stipsko, was plowing his field, and his plow hit an obstacle that turned out to be a wooden box wrapped in a chain. Hoping it was buried treasure, Trayche cut the chain and opened the box, and found... 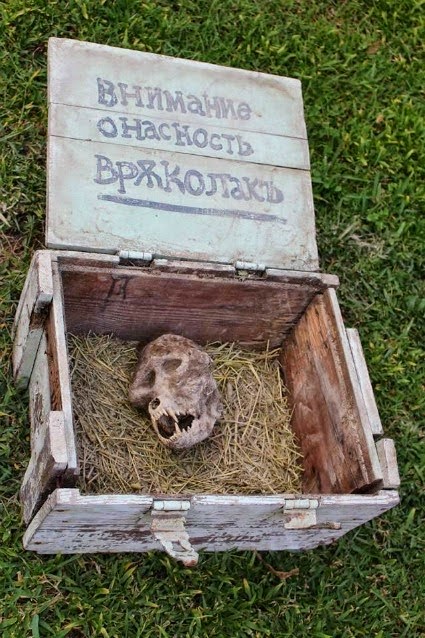 The last word, which comes out (more or less) "vrekolak" if you put it into English phonetics, is apparently a word that means (once again, more or less) "werewolf:"


Sabine Baring-Gould explains the many variations of lycanthrope folklore in "The Book of Werewolves," noting the term "vrekolak" resembles the Greek term "bourkolakas."

"The Greek werewolf is closely related to the vampire. The lycanthropist falls into a cataleptic trance, during which his soul leaves his body, enters that of a wolf and ravens for blood. On the return of the soul, the body is exhausted and aches as though it had been put through violent exercise. After death lycanthropists become vampires. They are believed to frequent battlefields in wolf or hyena shapes, and to suck the breath from dying soldiers, or to enter houses and steal the infants from their cradles," Baring-Gould writes.

So, of course, we have every incentive for the woo-woos to claim that it's a werewolf skull, case closed.

I was pleasantly surprised, however, when the writer at Phantoms and Monsters didn't go that direction.  He mentions a Bulgarian student, Filip Ganov, who saw the box and the skull and interviewed Trayche, and who at least was able to verify that the skull isn't an out-and-out fake.  The article says:


Trayche would not part with his werewolf skull but he did let Ganov take pictures, which were presented to a wildlife expert in Bulgaria who speculated that it was indeed from a wolf but not necessarily a werewolf. Instead, he surmised the wolf was suffering from Paget's disease, a genetic disorder (also common in humans) that can cause misshapen bones and enlarged skulls. Paget's disease can be caused by canine distemper virus, a common virus in wolves and dogs.

How about that?  A rational explanation!  The writer goes on to say:


The skull definitely looks both canine and human and a little baboonish, which would probably cause some consternation among Bulgarians and Macedonians raised on Eastern European folklore. The chain around the box is a good indication whoever buried it believed it was a creature they did not want roaming around again.

Which is exactly the point.  The fact that the people who buried the skull thought it was a werewolf isn't any kind of proof that it is a werewolf.

And finally, there's a call for further investigation:


So, is Trayche's skull-in-a-box from a werewolf? It's definitely a creature that's out of the norm. Only a DNA test will tell.

Precisely.  That's the thing I've always come back to; it's not like we don't have a way to find out the answers to these questions.  It's called science.  Of course, you have to believe the results once you get them, and accept it when you're wrong, a lesson that certain other cryptozoologists (I'm lookin' at you, Melba Ketchum) have yet to learn.

But it's heartening that at least here, we have someone who's saying, "Yeah, it's probably got a natural explanation.  In fact, we've even got a guess as to what that might be.  But let's find out."

Yes, let's.  And while we're at it, let's encourage other fringe researchers to take the same approach.  Could some of what they claim be true?  Sure.  But it's science that's going to tell us the answer, not adding more to the pile of zero-evidence anecdotes.