One of my reasons for doubting a lot of reports of the paranormal is because, to quote Neil deGrasse Tyson, we are poor data-taking devices.  We have, he says, "all sorts of ways of getting it wrong."

The problem is, of course, that our brain doesn't agree with that, most of the time.  Of course what we're seeing and hearing is real.  Not only is it real, we're seeing and hearing everything there is to see and hear.  We can't possibly be missing something, or sensing something that isn't there.  So if we have an experience outside of the normal realm, it must reflect reality, right?

But now, a study at the École Polytechnique Fédérale de Lausanne in Switzerland has shown conclusively that it's just not so.  It doesn't take much to fool us, and fool us so convincingly that our brains can't come up with any other explanation but that there's something supernatural happening... even if those brains already knew that they were part of an experiment, and understood how it was being done.

Olaf Blanke, a neuroscientist at ÉPFL, has led a team to create a ghost illusion so real that several participants asked to quit the study because they were so freaked out.  It was done quite simply -- no electrodes or any sort of elaborate apparatus needed. 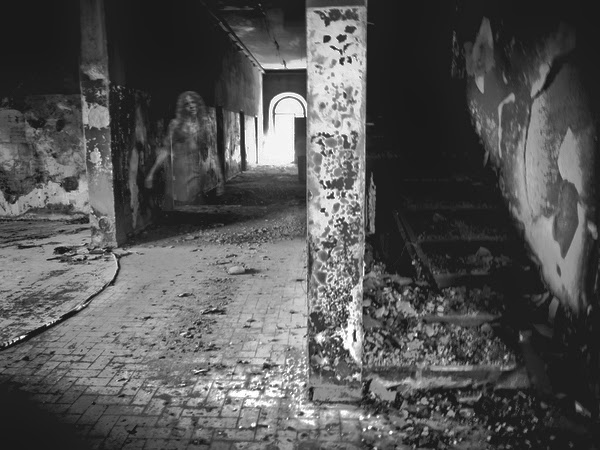 [This "ghost photo" was created by one of my Critical Thinking students, Nathan Brewer, as part of a project to illustrate how easy it is to generate a convincingly creepy paranormal photograph using PhotoShop.  Not bad, eh?  (used with permission)]

What they did was to have blindfolded participants move their hands, while a robotic arm behind them touched them on the back, moving the same way at the same time.  No problem there; the brain quickly figured out what was going on.

But then, they introduced a half-second delay into the proceedings -- so that the robotic arm was a little behind the movement of the person's real arm.  And this created a sense of an "unseen presence" behind them that several participants asked the researchers to stop after three minutes because the sensation was "unbearable."  One participant said he was convinced that there was not just one "ghost" behind him, but four!

"Our experiment induced the sensation of a foreign presence in the laboratory for the first time," Blanke said.  "It shows that it can arise under normal conditions, simply through conflicting sensory-motor signals.  The robotic system mimics the sensations of some patients with mental disorders or of healthy individuals under extreme circumstances.  This confirms that it is caused by an altered perception of their own bodies in the brain."

Which is fascinating, even if it punches further holes in our sense of seeing and interpreting everything correctly.

Now, understand, there are two things I am not saying, here:  (1) that all paranormal experiences can be explained from this exact phenomenon; and (2) that it's impossible that ghosts (and other such entities) exist.  What this experiment points out, though, is that anecdote isn't enough.  We're suggestible, easily confused, and bring out own biases into whatever we experience.  If a little touch from a robotic arm, on the backs of people who knew they were part of an experiment on perception, is sufficient to generate an unshakeable sensation of being in the presence of a ghost, how can we trust stories of the "I was in the room, and then I knew there was someone else in there with me" variety?

But admittedly, it could well be that there are ghosts, and an afterlife, and so on.  I've seen no convincing evidence of it, and lots of non-convincing evidence, and all too many out-and-out hoaxes and falsehoods.  But could it be?  Sure.

At the moment, though, I'm going to wait for either scientifically reliable evidence, or else my own death, at which point I'll find out for sure one way or the other.
Posted by Gordon Bonnet at 4:19 AM