It is a puzzle to me why some people seem so concerned about what other people are doing in the privacy of their own bedrooms.

My general attitude is that if it's between consenting adults, have fun.  I don't need to have an opinion about it.  Hell, I don't even need to know about it.  It is, to put it bluntly, none of my damn business.

Which brings us to PFOX (Parents and Friends of Ex-Gays and Gays).

Yes, I know that the acronym shouldn't be PFOX, it should be PAFOEGAG.  But I have to admit that "PFOX" is easier to remember.

According to PFOX's homepage, here's what they're about:


PFOX is a national non-profit organization committed to helping ex-gays and parents and friends of gays who want help, hope and community. PFOX exists to educate, support, and advocate for individuals and parents on the issue of same-sex attraction, and increase others’ understanding and acceptance of the ex-gay community.


Each year thousands of men and women with unwanted same-sex attractions make the personal decision to leave behind their former gay identity. And through gender affirming programs, including counseling, support groups, faith based ministries, and other non-judgmental environments, they are largely successful. Their decision is one only they can make.

Calling "pray away the gay" programs "non-judgmental" might be a contender for the Chutzpah Hall of Fame, given that at least once a week we hear about another pastor of a "faith-based ministry" who is calling for gays to be killed, as per the bible.  (Here's one of the recent ones.)

So anyway.  PFOX is pretty clearly an anti-LGBT organization, despite the appearance of the word "friends" in their name.  And this became clearer with the appearance along I-95 near Richmond, Virginia of the following billboard: 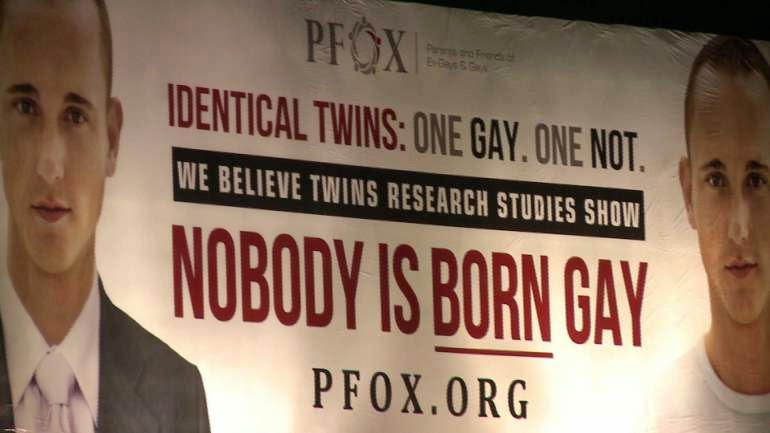 There are two things that make this billboard simultaneously appalling and hilarious:
"It just seems like there no place in today’s world for an organization that is promoting this as being some kind of deviant or distasteful lifestyle," Roux told reporters when he found out about the billboard.  "Because I’ve lived my life openly gay and happy for my entire life."

On a more serious note, there aren't just two lies on the billboard, there are three.  The third lie is that twin studies support homosexuality as a choice.  Way back in 1993, Whitam et al. published a study that showed that the concordance between homosexuality in monozygotic (identical) twins was 65% -- far higher than you'd expect by chance.  The authors are unequivocal in their conclusion, although they are clear on the point that the mechanism is not known.  They state in their final paragraph, "We are left then with the conclusion that biological factors are strongly operating in the determination of sexual orientation with the precise nature of these factors yet to be understood."

Which raises the question of why someone would lie outright about the science, not to mention the identity and sexual orientation of a model on their promotional materials.  The answer, of course, is that they have to lie, because scientific research has increasingly supported the conclusion that sexual orientation isn't a choice.  But this runs counter to their basic argument, which is that anything other than straight-up vanilla sexual intercourse within the confines of marriage is a sin.  So it's either change your message -- pretty unlikely -- or lie about the evidence.

So PFOX, or PAFOEGAG, or whatever, have been left pretty red-faced over the whole thing.  Not that it's going to alter their approach.  Which is kind of a shame, because while people are born with their sexual orientation already wired in, no one is born an asshole.  Being gay isn't a choice; harassing gays is.
Posted by Gordon Bonnet at 2:36 AM