Ouija boards are back in the news again, perhaps because of the recent release of the movie Ouija, which has people stirred up despite getting a 7% rating over at the site Rotten Tomatoes and reviews such as, "... strikingly like High School Musical, only with screaming."

Be that as it may, there is something about Ouija boards that really scares people.  Tales abound of people getting freaked out by messages from demons or evil spirits, even though the stories are usually of the "I heard it from my best friend's uncle's barber's daughter" type.  When you try it yourself, you quickly find that any "messages" that come through are banal at best, and easily explained through the ideomotor effect.  (For a really cool experiment that demonstrates this conclusively, go here.)

Further, there was a test run by none other than James Randi, where people who believed in the powers of Ouija boards were blindfolded and then asked their spirit friends to deliver messages anyhow.  The spirits all of a sudden seemed unable to see, themselves, and what they put out was gibberish, unless there's a language in the spirit world where "GHISKNNDPSBPLG" means something. 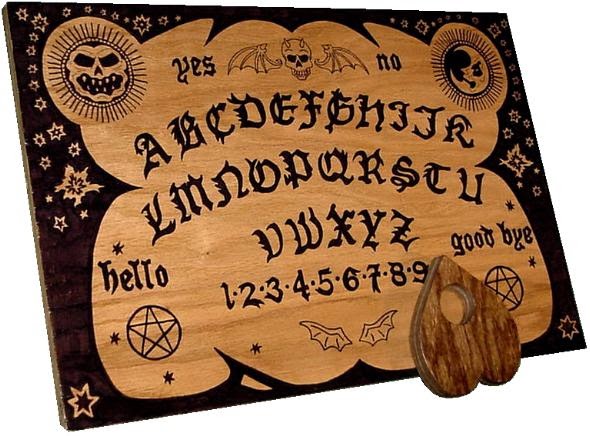 But still, the risks from demons and ghosts is ever-present for some people, and there are many warnings to "stay away from those things," even though you'd think Hasbro wouldn't sell many of 'em if every kid who used them ended up possessed.

This fact evidently has escaped some of the devout, who are alarmed by the hype that the movie has caused.  Ouija boards are expected to be a sellout this Christmas, which has freaked out the powers-that-be enough that a priest in Ireland made a public statement -- although under conditions of anonymity.  Maybe he didn't want the demons and evil spirits to find out he's been trash-talking them, assuming the demons and evil spirits read The Independent, which is where the story was covered.

"It's easy to open up evil spirits but it's very hard to get rid of them," the priest said in an interview.  "People, especially young people and teenagers who are likely to experiment with Ouija boards on a whim, can be very naive in thinking that they are only contacting the departed souls of loved-ones when they attempt to communicate with the dead using the boards.  It's like going to some parts of Africa and saying I'm personally immune to Ebola.  But it does leave people open to all kinds of spiritual dangers.  People don't intend any spiritual harm by it, but we live in a spiritual realm and you have no way to control what may impinge on you."

Yes, it's just like saying you're immune to Ebola, except that Ebola actually exists.

The anonymous priest wasn't the only one to make a public statement.  Church of England vicar Peter Irwin-Clark is equally appalled by the surge in popularity of the toy, and told a reporter for The Daily Mail, "It is absolutely appalling.  I would very strongly advise parents not to buy Ouija boards for children.  It’s like opening a shutter in one’s soul and letting in the supernatural.  There are spiritual realities out there and they can be very negative.  I would hugely recommend people not to have anything to do with the occult.  People find they are having strange dreams, strange things happening to them, even poltergeist activity."

I wonder if that's what's wrong with my wife, who two nights ago dreamed she was participating in a chicken rodeo.

So anyway.  Predictably I'm siding with James Randi et al., who think that the Ouija board is just a silly toy.  I'd invite anyone who is looking for a Christmas present for me, though, to get me one, and it will occupy an honored spot next to my decks of Tarot cards.  I'm assuming that this will be a more economical choice than the other thing I want, which is a "haunted sword" that appeared over at Craigslist a couple of days ago, with a price-tag of $150.  You can get a Ouija board over at Target for around $20, which I think you have to admit is quite a savings.
Posted by Gordon Bonnet at 2:58 AM