Here's looking at you!

One of the most iconic images from the movie trilogy The Lord of the Rings is the Eye of Sauron, the flaming, all-seeing slit-pupilled eye at the pinnacle of Sauron's castle of Barad-Dûr.  The idea is terrifying; putting on the One Ring allows Sauron's eye to see you, wherever you might be.  You become invisible to everyone else, but uniquely visible to the Dark Lord and his servants.

So it's no wonder that the concept captivated the imagination.  And now, an artist in Russia is making a replica of the Eye of Sauron as part of an installation on the top of a 21-story building in Moscow.


Which has caused the powers-that-be of the Russian Orthodox Church to freak out. 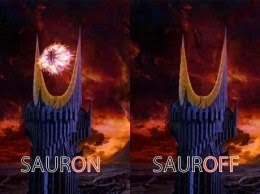 "This is a demonic symbol," the Russian Orthodox Church’s head of public affairs, Vsevolod Chaplin, told Govorit Moskva radio station in an interview.  "Such a symbol of the triumph of evil is rising up over the city, becoming practically the highest object in the city.  Is that good or bad?  I’m afraid it’s more likely bad.  Just don’t be surprised later if something goes wrong with the city."

This is hilarious on several levels.

First of all, the installation, "practically the highest object in the city," is all of one meter tall.  Next to the way the Eye of Sauron was represented in the movie, this thing would be about as impressive as Mini-Me.

Secondly, the Eye is going to be lit for seven hours.  That's it.  If lighting up a one-meter-tall art installation for seven hours is enough to cause the Triumph of Evil, maybe Evil deserves to win.

Third, I don't even see how the Eye of Sauron could be considered a symbol of evil's triumph.  Sauron was defeated, remember?  The One Ring got melted, and Barad-Dûr collapsed into a heap of rubble, taking the Unblinking Eye along with it.  So if anything, it should be a symbol of the fact that Evil doesn't always win.

But fourth, and most importantly; it seems to have escaped the higher-ups in the church that The Lord of the Rings is fiction.  I.e., it's not real.  Sauron never existed, and therefore by extension his Eye didn't either.  I know this is some pretty complex logic to expect them to follow, but even so.

You have to wonder how such superstition survives.  What kind of worldview do you have to espouse to believe that a rather underwhelming art installation representing a fictional character could cause god to curse a whole city?  This raises magical thinking to new heights.  Higher than 21 stories, even.

And I also wonder what the church leaders are going to try to do about it.  Pray, possibly, because there's nothing like fighting a non-existent threat with a useless solution.  The seven-hour lighting is supposed to happen tonight, and I hope we find out one way or the other.

What I think is likely is that the church will hold some kind of pray-in, the installation will be lit up on schedule and turned off on schedule, and nothing untoward will happen.  Then the church leaders will conclude that the pray-in deflected god's wrath, further reinforcing their view that they've understood the universe correctly.  Hallelujah!  God is so great!

Kind of makes you feel like what Frodo did was all for nothing, doesn't it?
Posted by Gordon Bonnet at 2:50 AM