I have bad news for you.  I know it's the holiday season, and all, and this could be kind of a buzzkill, but duty is duty.

We're all going to die.

Well, that may be a bit of an exaggeration.  Most of us are going to die.  There's going to be an earthquake, followed by an asteroid impact that will kill huge numbers, then floods and pestilence and other fun stuff.  And you'll never guess whose fault it all is.  Never in a million years.

Pastor Efrain Rodriguez, a self-styled Puerto Rican "prophet," has issued dire warnings to the United States.  We need to batten down the hatches, because it's too late to mend our ways, he says.  President Obama has led us too far down the road to perdition:


The President of the U.S. asked Congress for ALL Power.  He plans to have absolute control during this Emergency.  This means NO elections.  He has taken advantage of the imminency of this coming disaster.  This totalitarian power is a terrible danger.  This message should be sent to all Congressmen: you still have time to revoke this power.  Politicians, revoke the power you have given Obama.  You have no idea what you will face.

Sure.  The Republicans now control both houses of Congress.  It's completely plausible that the president would go to Congress and say, "Hey, I'd like to see a bill passed that gives me ALL power." And they would say, "Oh, sure!  Here you go!"

Then we hear about some of the awful things the president has done:


Obama does not love this nation, or Christ.  In his second term, he has shown his true intentions against everything that is Christian.  All the laws that he has signed indicate that he plans to persecute the church...  He signed laws never before signed.

Because signing laws that have already been signed makes sense, somehow?

We do find out some good news, however.  Obama is not the Antichrist:

Many believe he is the Antichrist, but he is not. He is only the antichrist's helper.  He does his dirty work.  Obama is only preparing the way for the Real Antichrist, who will be revealed after the church departs from this earth.

I didn't know the church was scheduled to depart!  Let me know when.  I'll be there to wave goodbye.

But the fact that Obama isn't the Antichrist doesn't mean he isn't a bad guy:


He does not chastise or penalize the homosexuals, or the muslims [sic], no matter what they do, yet he takes every action to penalize and extinguish the church of Christ.  He takes away freedoms from Christians, while at the same time giving freedoms to those who blaspheme God.  Even Putin, the Russian President, rebuked him for this.  Woe to you, poor, poor man!

At last count, Christians made up 74% of the citizens of the United States.  If he was penalizing them and trying to extinguish Christianity, don't you think people might object?  There are four churches within a couple of blocks in my home village, and last Sunday the parking lots were all full.

But a little thing like reality doesn't stop Pastor Rodriguez.  We're all going to pay for Obama's sins.  It's all going to start with a "12 point earthquake," he says:


Jehovah will have absolute control over the earth that night.  This is what the 12 point earthquake means-The Presence of Jehovah on earth.  The Lord comes with His book to claim many souls before Jehovah, The Father, for His kingdom that night.

No, what an earthquake means is a shift of tectonic plates along a fault line.

But since a "12 point earthquake" clearly isn't enough chastisement, there's going to be an asteroid impact.  Obama will try in his dastardly fashion to make sure that the asteroid hits Pastor Rodriguez, because he's just that important:


Obama, the President of the United States sent approximately 40 missiles to PR, to try to break the asteroid in the sky, so that it would fall on land (in Puerto Rico), and not in the sea.  On a previous message, Efrain warned Obama to not press those buttons.  He told the Army not to do it. He said: "Do not interfere with Jehovah's plans."

This evil plan will fail, however, because god is screwing around with NASA:


NASA keeps giving dates and trying to justify themselves.  The prophetic letters written by Efrain indicate that The Lord would keep NASA in a state of confusion, bewilderment and agitation, since they chose to not consult with The Lord, and chose to not warn the people when they first received Jehova's warning through Efrain.  They even labeled the message as false, in a press conference in Florida.

After that, there will be a flood that will stop all of the rivers on Earth, and then a pestilence that will "be worse than all of what came before it."  Then the Rapture.  And then things really go to hell. 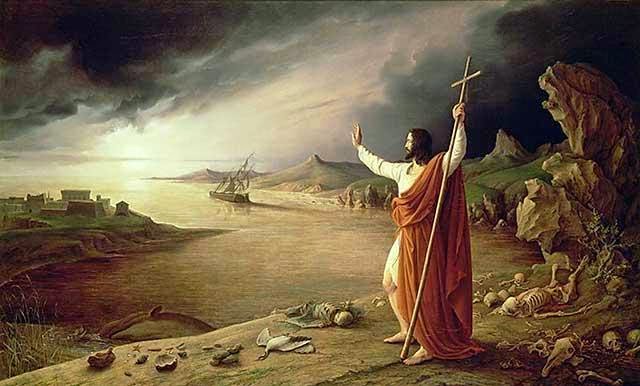 So we're really in for it, and it's all Obama's fault.  Myself, I'm rather looking forward to the whole thing.  The Four Horsepersons of the Apocalypse seem to me a good bit more interesting than Pastor Rodriguez, and being an atheist I'm pretty much fucked anyway, so I'll take my chances.

But as a funny postscript to all of this, there's no such thing as a wacko without one or more equal and opposite wackos, so it comes as no surprise that there are other preachers out there saying that Pastor Rodriguez is a false prophet, and that they know what's really going to happen.  Rodriguez is called a "deceiver" over at Before It's News, and his message labeled as "religious spam" at Church of God News.  But that doesn't mean that the Tribulation isn't going to happen; it just means that he got some of the details wrong.  So he's not god's spokesperson, I am!

Frankly, I have no problem with all of this infighting.  I'm just going to pop some popcorn and sit back to watch.  After all, the more time the apocalyptoids spend yelling at each other, the less time they'll have to send hate mail to me.
Posted by Gordon Bonnet at 3:02 AM