It's an uncomfortable situation when you agree wholeheartedly with a group's ultimate goals, and deplore the means by which it's trying to achieve them.

Such is the situation I find myself in with respect to the latest publicity stunt by the environmental group Greenpeace.  Spurred by a United Nations climate change conference being held in Lima, Peru, Greenpeace activists illegally entered the site of the Nazca Lines World Heritage Site to put down pieces of yellow cloth to spell out a message to delegates. 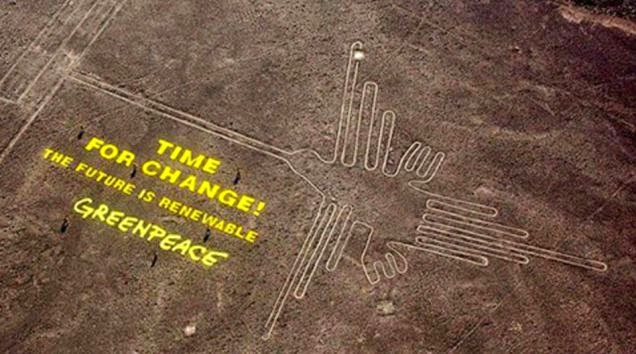 The stunt has outraged Peruvians, not to mention archaeologists, historians, and anyone with a shred of cultural sensitivity.  The 1,500-year-old site is extremely sensitive to damage; even tourists are required to view the lines from the air.  Only on rare occasions is anyone allowed to go to the site on foot, and they are required to wear special footwear designed to minimize damage.

"They are absolutely fragile," said Luis Jaime Castillo, Peru's Deputy Minister of Culture.  "They are black rocks on a white background.  You walk there and the footprint is going to last hundreds or thousands of years.  And the line that they have destroyed is the most visible and most recognized of all."

Peru's government is planning on suing Greenpeace for damages, as well they should.  As for Greenpeace, it issued an apology, to wit:

Without reservation Greenpeace apologises to the people of Peru for the offence caused by our recent activity laying a message of hope at the site of the historic Nazca Lines. We are deeply sorry for this.

We fully understand that this looks bad. Rather than relay an urgent message of hope and possibility to the leaders gathering at the Lima UN climate talks, we came across as careless and crass.

We have now met with the Peruvian Culture Ministry responsible for the site to offer an apology. We welcome any independent review of the consequences of our activity. We will cooperate fully with any investigation.

We take personal responsibility for actions, and are committed to nonviolence. Greenpeace is accountable for its activities and willing to face fair and reasonable consequences.

Dr Kumi Niadoo, the International Executive Director of Greenpeace, will travel to Lima this week, to personally apologise for the offence caused by the activity and represent the organisation in any on going discussions with the Peruvian authorities.

Greenpeace will immediately stop any further use of the offending images.

Which is all well and good.  But the damage goes beyond the appalling thoughtlessness of tramping all over a protected and irreplaceable archaeological site.  It blows a gaping hole in their message, which is that environmentalists care about the Earth and its people, and have our best interests at heart.  In a time when the issues of climate change, resource acquisition, and responsible environmental management are teetering on the edge, Greenpeace has given policymakers a big old shove in the wrong direction, and given the purveyors of the status quo more leverage in convincing people that environmentalists are irresponsible and thoughtless radicals.

How can anyone have thought this would be a good idea?

As much as I am in agreement with most of Greenpeace's goals, the end does not justify the means.  Not only is the damage to the monument itself an affront, but the damage they've done to their own message might be worse in the long run.  People who were in the "undecided" camp on environmental issues will be that much more reluctant to side with a group that seems not only to lack any cultural sensitivity, but common sense as well.

And the last thing the environmentalists need right now is to make more enemies.
Posted by Gordon Bonnet at 2:43 AM