The Spear-Danes, in days gone by...

Sometimes I can be a little slow on the uptake, I'll admit.

I think reasonably well, but I'm not quick.  Still, the other shoe does drop eventually, which is fortunate.  In the case of the article I ran across yesterday, it'd be especially embarrassing if I hadn't figured it out, as you'll see momentarily.

It began when a friend of mine sent me a link to a post on Latest UFO News entitled "UFOs, Vikings, and Bigfoot?"  Given my interest in all three -- my master's thesis was about the contributions of the Vikings to the Old English and Old Gaelic languages -- my friend thought I'd be tickled.  Which I was.  Apparently medieval Scandinavia was rife with paranormal goings-on, something I never realized when doing my thesis research.

At first it just seemed to be the same-ol'-same-ol' -- Thor et al. were ancient aliens, trolls were Bigfoot, and so forth.  But then the author, "Doc Vega," launches into a story about an Arab traveler, Ibn Fadian, who chronicled the doings of the Vikings back in the tenth century.

Vega is correct that Ibn Fadian was a real person.  His full name was Ahmad Ibn Fadian, and his first-hand account of not only the Vikings, but the Bulgars and the Turks, is nothing short of fascinating.  He states that Ibn Fadian's manuscript was the basis of Michael Crichton's novel Eaters of the Dead, which he calls "a very real account of events that are nothing short of remarkable."

So anyhow, Ibn Fadian, who Vega refers to over and over as "Ibn" even though "Ibn" isn't his first name (it means "son of" in Arabic), recounts the adventures of a Viking named Buliwyf who lived in a village in Scandinavia called Wyglif.  But he doesn't get to Buliwyf's story right away.  He first tells us about the depravity at a Viking funeral, which included lots of eating, drinking, sex, and human sacrifice.  Which, of course, is interesting enough, given the subject.  But then Vega's account (and supposedly Ibn Fadian's) takes an interesting turn.

The village of Wyglif, and the whole kingdom ("Rothgar"), were apparently under some kind of serious threat, and Buliwyf was the only one who was brave enough to face it.  In fact, Buliwyf took Ibn Fadian to see what the threat was about, and Ibn Fadian was appalled when he arrived at a farm house and saw that the family who had dwelled there had been brutally murdered, and their corpses partly eaten.  The villains who had done this, Buliwyf said, were monsters who lived in the woods called "Wendol."

The Wendol, Vega said, were clearly Sasquatches.  Because (1) ancient legends are admissible as scientific evidence, and (2) there are so many other verified accounts of Bigfoots eating people.

But this wasn't what bothered me most about this.  There was something indefinably... familiar about what Vega was telling us.  And I hadn't read Crichton's novel, so I knew it wasn't that.

So I kept reading.

Vega goes on to tell us that Lloyd Pye (he of the "Starchild Skull" nonsense) thought that the Wendol were probably Neanderthals, or perhaps Gigantopithecus.  Mostly based on the fact that both Sasquatch and the Wendol are described as "big," which I think we can all agree is sufficient to determine taxonomic status.

Anyhow, Buliwyf goes and kills one of the Wendol, and has an encounter with a giant sea serpent (further reinforcing his claim that this manuscript is 100% true).  But we then hear the bad news that Buliwyf had to face yet another challenge, which was...

This was the moment that the light bulb went on.  You probably figured it out in the first paragraph, but cut me some slack, here; I seriously was not expecting this.  In fact, I said aloud to my computer, "What the fuck?  He thinks that Beowulf is a true story?"

The answer is: yes, he does.  Buliwyf is Beowulf.  Rothgar is Hrothgar.  (That one should have been a dead giveaway.)  Wendol is Grendel.

Besides how long it took me to figure it out, there are various things that are amusing about all of this.

The first is that the best guess of the origins of the Beowulf legend lie in the late 5th century, a good 400 years before Ahmad Ibn Fadian took his amazing voyage with the Vikings.  So while Ibn Fadian may have recounted Beowulf's exploits as a legend he'd heard, he was four centuries too late to have participated in them (or anything related to them).  And that's assuming that they have any basis in reality at all.

The second is that I should have caught on right away, because Beowulf is far and away my favorite ancient legend.  I've read it many times (I especially love Seamus Heaney's wonderful translation).  It's a story that is capable of transporting me effortlessly back into a different millennium.

But the funniest thing about all of this is that I like Beowulf so much that I named my dog Grendel.  I chose this name because Grendel-the-Dog looks like he's made of spare parts; he seems to be the result of putting about six different incompatible breeds of dog into a genetic blender.  Similarly, Grendel-the-Monster is the tragic figure he is because he was a composite being -- not quite human, not quite beast, caught in the undefined middle. 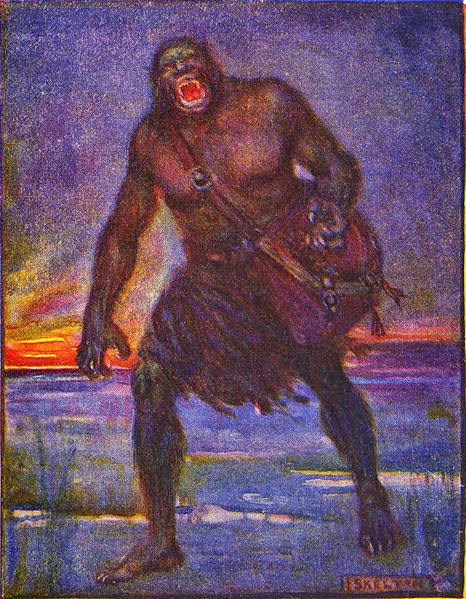 And for comparison purposes: 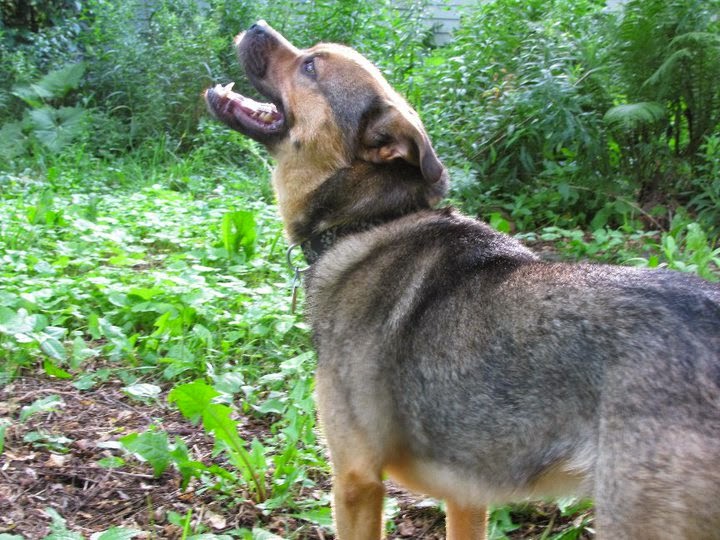 So okay, the name "Grendel" wasn't such a good fit, personality-wise.

Anyhow.  We apparently have yet another person who thinks that a wild legend was a historically-accurate retelling of actual events, and then got the chronology wrong by 400 years.  And who didn't even catch on that Michael Crichton's story was a novelization of a myth, which thus added a second layer of fiction on top of the first.

I mean, I can be slow sometimes, but I'm not that obtuse.
Posted by Gordon Bonnet at 3:05 AM