Aftermath of the storm

The biggest winter storm yet this season has spun its way out into the north Atlantic, after burying parts of the northeast under as much as four feet of snow, and this has activated two groups of people.

The first is the cadre of folks who don't understand meteorology, and think that multi-variable analysis of winds, surface and upper atmosphere temperatures, air moisture content, and pressure gradients should give you predictions of snowfall totals accurate to five significant figures.  You have your people who got more snow than they thought they were going to, inconveniencing their lives (clearly the weather forecasters' fault), and the ones who got less than they feared, causing them to batten down the hatches unnecessarily (again, blame the forecasters).

"I want that job!" one person commented.  "Half right half the time, no better than guessing, and they still get paid."

I dunno.  Considering that Long Island, most of Boston and Providence, and coastal Maine are still digging themselves out, the forecasters did pretty damn well.  We'd have experienced a tad more inconvenience, don't you think, if we hadn't had any warning that the storm was coming? 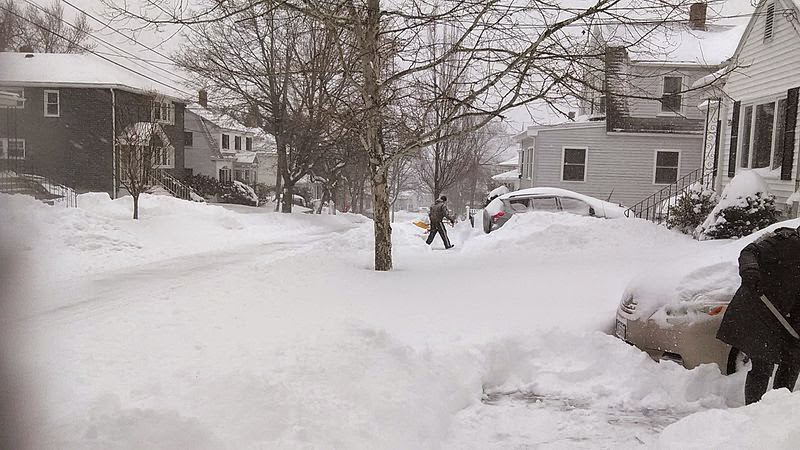 But worse than the scoffers is the group of people who think that "it gets cold in winter" is equivalent to "climate change isn't real."  These include Donald Trump:


This very expensive GLOBAL WARMING bullshit has got to stop.  Our planet is freezing, record low temps, and our GW scientists are stuck in ice.

Amazing that someone could pack so much nonsense into two sentences.  First of all, "global warming" hasn't been "very expensive" yet, because we haven't done a fucking thing about it, mostly because our leaders are still arguing over whether it exists.  The planet's not freezing, nor are we experiencing "record low temps;" in fact, 2014 was the hottest year on record.  And you'd think Trump himself would be nice and warm, considering the dead possum he wears on his head.

Then there's RedState.com's Erick Erickson, who added a religious filagree to the whole thing with the following baffling statement:

Maybe if Jesus does return, he could explain to these mental midgets the difference between "weather" and "climate."

Then there's Fox Business's Stuart Varney, who apparently not only doesn't know the difference between weather and climate, but doesn't understand the Law of Conservation of Mass.  A recent study found that Antarctic sea ice was increasing in volume, and Varney says that because of this, we should be "looking at global cooling, not global warming" -- neglecting the fact that Antarctica is losing continental ice faster than it's gaining sea ice, meaning that there's a net loss.  (And even the gain in sea ice was predicted by climate change models; it's due to warmer air temperatures, higher humidity, and higher precipitation in the form of snowfall.)

But no such spew of foolishness would be complete without Rush Limbaugh weighing in.  Every time his name comes up, I marvel that anyone is still listening to this bloviating gas bag, but apparently enough people are that he's still on the air.  And here's his take on the weather:


I can't tell you the number of times a record or major snow storm has been forecast -- this year alone -- I was just trying to think last night, trying to recall a couple of instances where they forecast something that is going to be really, really bad, and it hasn't even come close to being, not even close to bad, much less really, really bad. And not just in New York but elsewhere around the country. It's been a horrible, horrible year for forecasts. And the reason is, if i can cut to the quick, the left has corrupted everything. Just like the left has corrupted the professoriate, the faculty at major institutions of higher learning, the left has populated all of these bureaucracies. The Department of Commerce runs the National Weather Service, and do not believe that they're not politicized.

So now the weather has a liberal bias?

What earthly reason would liberals (or anyone else, for that matter) have for exaggerating storm impacts?  Oh, wait, I forgot; the left wants to destroy America.  Because, um, bwa ha ha ha ha ha ha ha, that's why.  So they bring major cities along the East Coast to their knees with warnings about a nonexistent winter storm, so as to accomplish their evil goals.  And then... the storm shows up, pretty much right on target, bringing the cities even more to their knees.  Faked 'em out, didn't they!  Ha!

That's how evil those liberals are.

Maybe the liberals even created the storm, you think?  Using their commie pinko leftist snow-making machines, imported directly from the Soviet Union.  (Yes, I know the Soviet Union doesn't exist any more.  Shush, I'm on a roll.)  Who knows what they'll do next?  Maybe this year they'll use their Tornado-making Machine to send tornadoes to Kansas, and their Hurricane-making Machine to launch hurricanes at the Gulf Coast, thereby sending these areas exactly the kind of weather they usually get.

Look, as I've mentioned before, I'm really not very political myself.  I'm a science nerd, not a political science wonk.  I'm much happier wearing my lab coat and my black plastic-framed glasses with electrical tape around the middle than I am discussing policy.  So although I don't much care what you believe in terms of politics, I can say with some authority that we all need to stop believing the talking heads like Rush Limbaugh and Erick Erickson and Donald "Scalp Possum" Trump, and start listening to the scientists.  They may not be 100% accurate, but their models and predictions are a damn sight better than they were even ten years ago.

On the other hand, maybe it's just easier to wait until a really hot day this summer, and point out that if a snowy day in winter disproves climate change, then a hot day in summer proves it.  If that's the kind of logic that works with these people, it's worth trying.