Islam has had some serious problem with its PR in the past couple of weeks, what with the Charlie Hebdo massacre, a series of Boko Haram attacks in Nigeria that left an estimated 2,000 dead, a horrific incident involving a ten-year-old female suicide bomber, and the flogging of Saudi blogger Raif Badawi for "insulting Islam."

So let's do a little thought experiment, here.  You're a prominent Muslim cleric, and you read the litany of bad news.  You're concerned not only about how the rest of the world views your belief system, but how Muslims themselves must feel when they hear about the atrocities being done in the name of their religion.  What do you do?

If you picked #5, you understand the leadership of Islam all too well.  Muslim leaders have been far more willing to mess around with prohibitions against random behaviors than to stand up against the horrors perpetrated in Islam's name.  (Some leaders have done so, fortunately; there have been several Islamic groups who have spoken out, especially regarding Charlie Hebdo.)

But in theocratic Saudi Arabia, mostly what we've heard on the topic of human rights, freedom of speech, and eliminating terrorism is: silence.

But woe unto you if you build a snowman.  Saudi cleric Sheikh Mohammed Saleh al-Munajjid said that it was forbidden to build a snowman, "even in fun:"

It is not permitted to make a statue out of snow, even by way of play and fun...  God has given people space to make whatever they want which does not have a soul, including trees, ships, fruits, buildings and so on.

So now snowmen have souls?  What, did this guy think that Frosty the Snowman was a historical documentary?

While some Muslims are shaking their heads about how ridiculous this is, there are a lot who apparently think this is perfectly reasonable.  "May God preserve the scholars, for they enjoy sharp vision and recognize matters that even Satan does not think about," one responder wrote.  "It (building snowmen) is imitating the infidels, it promotes lustiness and eroticism." 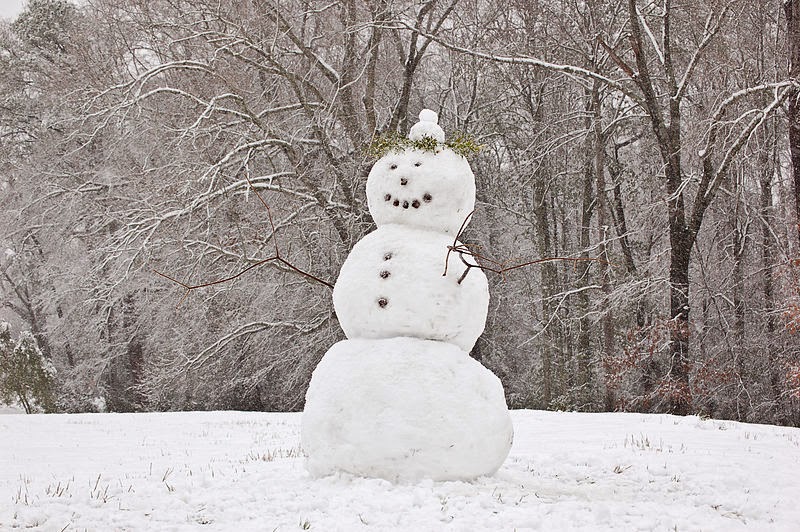 [image courtesy of photographer Thomas Cook and the Creative Commons]

And seriously.  Do they really have that big a snowman problem in Saudi Arabia?  It's no wonder that Satan hasn't thought about it.  Last I looked, Saudi Arabia is basically a big desert.  Prohibiting snowmen in Saudi Arabia is about as reasonable as me, up here in the arctic wasteland of upstate New York, issuing a fatwa against palm trees.

Even if it does convince most of the rest of the world that the worldview is, at its basis, completely insane.
Posted by Gordon Bonnet at 2:21 AM