An aura of divergent thinking

First, let me just say that I love my students.

Far from conforming to the slacker, disaffected teenage stereotype, I find that nearly all of my students are natural questioners, are interested in the world around them, and are willing to be engaged with learning.  We as teachers have only to hook on to that energy, avoid putting a bell jar over the flame of their inborn curiosity, and half the battle over "higher standards and academic achievement" will be won.

Take, for example, my Critical Thinking classes.  An ongoing exercise we do once weekly through the entire semester is media analysis; students submit an analysis of an example from popular media, as an illustration of some concept we've studied during the previous weeks.  We look in turn at print media, audio/visual media, and online media, but other than that, there are few strictures on what they can turn in to receive credit for this project.

It's amazing what they find.  Once tuned in to a few basic principles of media analysis, high schoolers rapidly become adept at sorting fact from fiction from outright bullshit.

As an example of the last-mentioned, take a look at the site one of my students submitted last week, a little gem called Reading Auras.  In particular, she drew my attention to the page, "Aura Dating for Seniors -- A New Way of Looking at Love."

This site is suggesting that senior citizens find new love by comparing the color of their aura with that of a potential significant other. 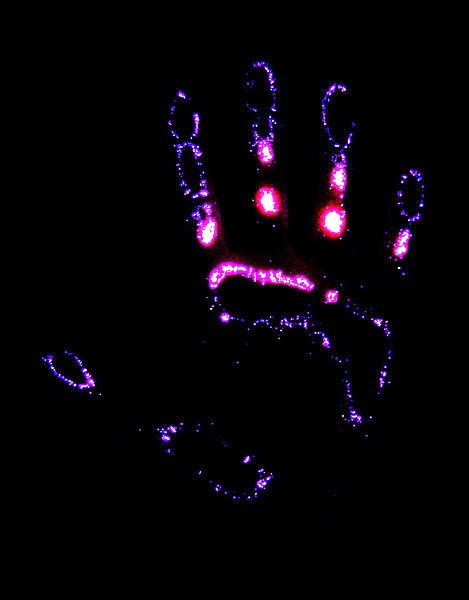 It starts out in a remarkably condescending fashion:


One of the more interesting applications of this knowledge is in dating, with special emphasis on senior dating.  Seniors are less familiar with the Internet and because of this they might not be able to give an accurate or complete description of their personality details and likes and dislikes.  Neither they would [sic] be able to describe too well what they are looking for in a partner.

Now that we've established that once you pass the age of 65, you are no longer articulate, let's take a look at the solution:


The aura personality map, in this case, would work like an automatic scanner that reads and translates all that the seniors could not put in words.  Besides, matching the auras is much more accurate in finding the right partner than any other method.  This is because each color of the aura would provide information about the person that would be a better guide to find the right person.

The relationships that come out from aura colors matching are more meaningful for it is based on the vital energy sources.  This means there would be a better chemistry between the matched senior dates right from the beginning, which in turn would have better chances of developing into a long term significant relationship.

Well, this is correct in one sense; if I was re-entering the Dating Game, I'd want to know right away if a potential partner thought I had a nice-looking aura, because no way would I want to become romantically involved with someone who sees nonexistent halos around people.

On this site, we also find out that it's not a good thing if you have a brown aura, unless it's "caramel brown," which means that you're "fun;" that you can compliment your aura readings with reading a person's tongue, because the tongue's "size, shape, color, and topography" tells you a lot (for example, if your tongue is blue, you have circulatory problems); that your pets have auras, and that if you tune in to your pet's aura (s)he will "show more pleasure than usual;" and that children are naturally adept at seeing auras, and we should encourage them in this rather than dissuading them by silly old narrow-minded rationalist nonsense like teaching them to sort fact from fantasy.

This last-mentioned is at least within hailing distance of the truth.  There is one skill at which children outstrip most adults by a mile, and that's divergent, creative thinking.  A study by Robert McGarvey, which gained traction largely because of its use as an example of how schools fail by the phenomenal speaker Sir Ken Robinson, shows that by one measure of divergent thinking, preschoolers score 84% -- and second graders an average of 10%.  This is, Robinson says, because by second grade, kids have already learned "that there is one answer, and it's in the back of the book -- but don't look."

In my experience, though, you can resurrect this long-suppressed ability for creative critical thinking, but it requires teachers to do something that many of us find pretty scary -- to let go of the reins some. Turned loose on academics, most students can re-engage their curiosity and capacity for divergent thinking quickly.  Take, for example, a recent study that showed that when students are given the opportunity to make choices about what they read for their classes, they read more often and more enthusiastically.  Who wouldn't?  It doesn't take a Rhodes Scholar to see that autonomy is a motivator.  As literacy advocate Pam Allyn put it, "You become a lifelong reader when you're able to make choices about the books you read, and when you love the books you read.  You tend to get better at something you love to do."

But our response, as educators, has been to tighten down more, to place more restrictions on how students learn and on how they demonstrate that they have learned, all behind the rallying cry of "raising standards."

As my student's analysis of the aura website showed, when given the opportunity to dig into a topic, students are capable of doing so with gusto.  My student's presentation of her media submission to the class began with the statement, "This may be the most extreme example of confirmation bias that I've ever seen -- these people are literally seeing what they want to see."

But are we, as educators, doing the inverse of that -- not seeing what we would prefer not to see?  More student autonomy, more divergent thinking, more ways of getting to answers, more ways of expressing them?

And how much of that reluctance comes from our conviction that there should be only a single way to learning?

It seems fitting to end with a quote from Sir Ken Robinson:


We have to go from what is essentially an industrial model of education, a manufacturing model, which is based on linearity and conformity and batching people.  We have to move to a model that is based more on principles of agriculture.  We have to recognize that human flourishing is not a mechanical process; it's an organic process.  And you cannot predict the outcome of human development.  All you can do, like a farmer, is create the conditions under which they will begin to flourish.