I just love it when woo-woos try to blend ideas together.

After all, reading about the same crazy claims over and over gets to be a bit of a bore.  So it's wonderful when I find a site that is a marvelous mélange of misguided mishegoss.  (Like that?  I spent ten minutes trying to see how I could make that one (1) multilingual, and (2) alliterative.  Oh, the things that make a linguistic nerd happy.)

Yesterday, I stumbled upon such a bubbling bouillabaisse of bollocks (okay, I'll stop now) that I had to tell you about it.  In it, we find out that there's a connection between the Book of Revelation, Bigfoot, UFOs, El Chupacabra, astrology, the Illuminati, and giant bugs.

So strap yourself in.  It's gonna be a bumpy ride.

The author, one Greg May, starts off with bang.  His piece, entitled "Monsters & Armageddon," begins thusly:


Armageddon – or World War III – is just a matter of a few more political pages being turned when the world sees God destroy the nations that have tormented Israel and her people. Armageddon is the battle the Bible describes where the blood rises to the bridles’ of the horses' mouths and one third of the world’s population is destroyed in a single day (Revelation 9:15).

Which I can say with some authority is a crapload of blood.  How will the Four Apocalyptic Horsepersons run around killing people, if their horses have to swim? 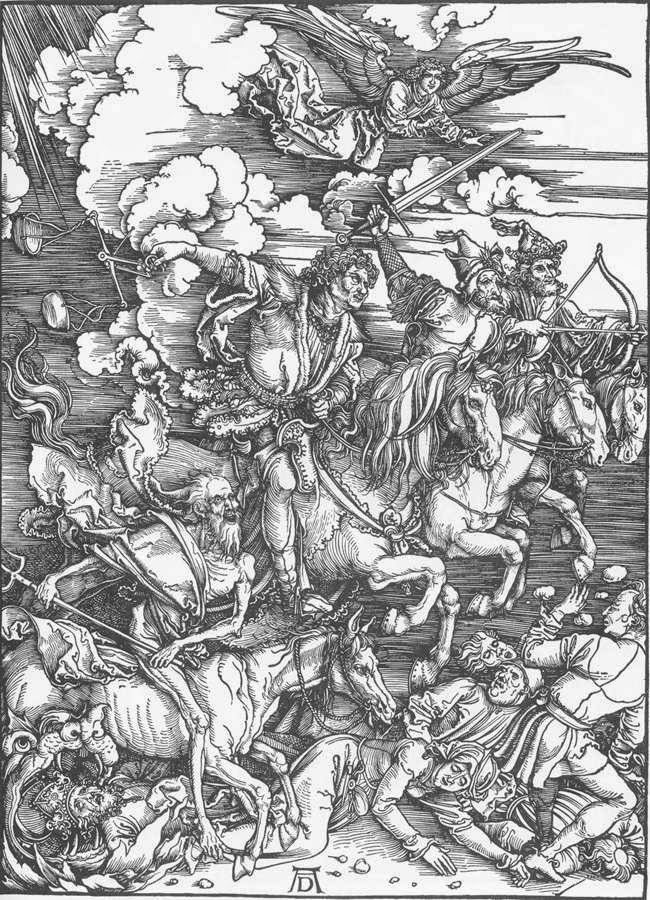 Albrecht Dürer, The Four Horsemen of the Apocalypse [image courtesy of the Wikimedia Commons]

But then, instead of launching off into the usual End Times craziness, May speculates that there may be some connection to cryptozoology:


Do these fallen angels include Bigfoot and other monsters?

The Hebrew word for devil or demon is ‘sayer’ meaning ‘hairy ones’. According to the Book of Enoch, the Nephilim were condemned to be evil spirits of the Earth. In his fascinating book THE NEPHILIM AND THE PYRAMID OF THE APOCALYPSE Patrick Heron writes: “We have no knowledge of what happened to the fallen angels who caused the second contamination of the Earth after the Flood. Perhaps they are still wandering the Earth, hiding out in some dark, evil forest, wary of the advance and onslaught of man.”

Does this not describe Bigfoot and other hairy bipeds?

Yes, I suppose you could say that the Nephilim and Bigfoot are similar, in that both of them are nonexistent.  But otherwise, I'm not sure there's much similarity.  Oh, wait... they're both "big."  So if that's sufficient for you, then I guess we have a match.

After this we hear about El Chupacabra in Assyria, and how lunar eclipses (which May calls "blood moons") means that "god is going to pour his wrath out upon us," because apparently lunar eclipses are a new thing.  But by far the most alarming thing May reveals in his post is that the US has ordered "a shipment of between 30,000 and 60,000 guillotines from China" in order to kill everyone who won't take the Mark of the Beast.

When I read that, I was just horrified.  I mean, how are we supposed to get the American economy back on its feet if we're outsourcing guillotine production to China?  We should have our guillotines manufactured right here in the good old U. S. of A.  We have carpenters who can build the frames, and steel plants to manufacture the blades, here on American soil.  Let's stop buying the weapons that the Antichrist will use to cut all of our heads off from overseas sweatshops!  Can I hear an "America, Fuck Yeah!"?

Um, okay.  So there's that.  Then we hear that when the time of Tribulation is upon us, we're going to be attacked by huge bugs:


The Book of Revelation tells us during the Tribulation the Pit (Abyss) will be opened and locusts will be released to ‘torment men for five months’ (Revelation 9:1-5). Don’t you think it is interesting how some ETs appear in the guise of a praying mantis - which is a type of locust? Remember all those conspiracy stories about government employees working side-by-side with aliens - many of them looking like praying mantis - in the undergound base near Dulce, New Mexico?

Well, first, a praying mantis isn't "a type of locust."  And I went through Dulce, New Mexico a while back, and there wasn't an underground base there, just a lot of sagebrush and rocks.  (Of course, that's what I would be, evil disinformation specialist that I am.  I'm making an Illuminati hand gesture in your direction right now, in case you were wondering.)

And the whole thing ends with some references to the Roswell Incident, Mothman, the Church of Satan, and how a story about fig trees somehow caused the Holocaust.

At that point, however, my eyes were spinning so badly I couldn't read any more.  But the link to the page is up at the top of this post, if you're interested in further delving into this delectable decoction of déliriant dreck.

Sorry, I said I would stop.  I'm really done this time.
Posted by Gordon Bonnet at 3:29 AM