One of the students in my Critical Thinking class said yesterday, "Did you know that there is a claim out there that cats are actually aliens?"

My response was that it didn't surprise me.  Pretty much any crazy statement you can make will turn out to have at least a few people who fervently believe it's true.  Here at Skeptophilia we've run into people who think that The Lord of the Rings is factual history, that three hundred years of the Middle Ages never happened, and that Keanu Reeves is an undead vampire.  So color me unsurprised that there are people who think that cats come from another planet.

Also, there's the issue that I own a cat.  Well, "own" is the wrong word.  The cat in question, Geronimo, condescends to sharing a roof with me.  Personally, I would not be shocked to find out that Geronimo was actually an alien, if the alien planet he came from was hostile and evil.  Here's a photograph of Geronimo and my son, Nathan: 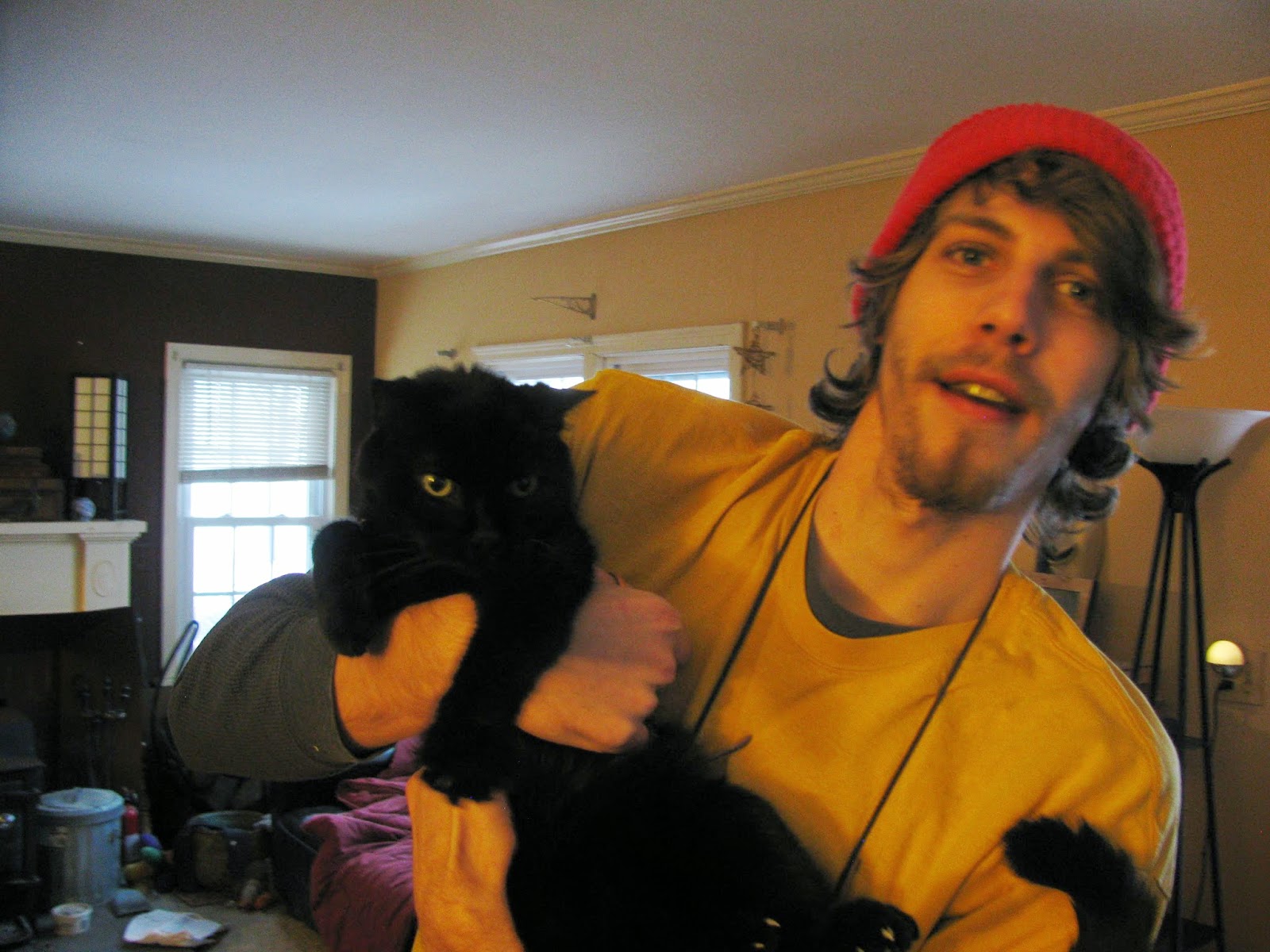 Geronimo communicating the alien message, "PUT ME DOWN."

Geronimo meows constantly, and it's not one of those adorable little kittenish mews you sometimes hear from cats.  This is a nasal, deep throated "MRRRROOOW."  We have decoded this much of his alien language; it means "Fuck you."  So conversations between ourselves and Geronimo go like this:

"Hey, Geronimo, do you want some food?"

"Come up in my lap and I'll skritch your ears!"

So my general feeling is that if Geronimo is an alien, he got sent here as a punishment for some wrongdoing on his home planet and is decidedly unhappy about the whole thing.  And the situation isn't helped by the fact that my dog, Grendel, thinks that Kitties Taste Yummy and so every time Geronimo comes to a full stop, Grendel trots over and licks him in the face.

But there are people, apparently, who seriously believe that it isn't just Geronimo; all cats are aliens.  More specifically, they're alien spies, sent to gather information about us humans and relay it back to the home world.  We get "evidence" for this "theory" that includes the tried-and-true "Egyptians worshipped cats as gods" thing, conveniently ignoring that 90% of the Egyptian gods had heads of various animals, and no one is suggesting that cows, for example, are engaging in extraterrestrial espionage.

We're also told that there is no record of the existence of cats on earth prior to 4,500 years ago, that they are capable of disappearing at will, and that if you pull a cat's ears back, it looks "exactly like a Grey."

All I can say is, I'd like to invite any conspiracy theorists to come to my house and try that last-mentioned move with Geronimo.  We'll see how well they can participate in their loony internet forums after their eyes are clawed out.

Oh, and there's also a thing about how cats will go from a relaxed state to jumping up and running out of the room in a matter of seconds.  According to the "theory," this is because the cat got an urgent message from the mothership and has to dash off to somewhere that there's good reception, or something.

As far as I can tell, though, there's not much else going for this claim.  Apparently someone even asked a paleontologist at the University of Wyoming, Ryan Haupt, about the statement that there were no cats on Earth prior to the Egyptians, and he said that it was bogus.  But you know those scientists.  Always engaging in disinformation campaigns.  My guess is this guy knows the truth perfectly well but has cats of his own, and he's afraid that if he rats them out, Mrs. Fluffums and Tigger will disembowel him one night in his sleep.

So there you have it.  Feline extraterrestrial spies, in your own home.  I decided to risk my own safety in the name of journalism, so I went and confronted Geronimo about the matter.  "Okay, bud," I said in a stern tone, "it's time for the truth to come out.  Are you, or are you not, an alien espionage agent, relaying information about us back to your evil overlords on another planet?"

Geronimo thought about it for a moment, and then replied, "Fuck you."
Posted by Gordon Bonnet at 2:45 AM