I'm certain that all of you by now have heard about the deaths of twelve members of the staff of the French satirical magazine Charlie Hebdo in an "apparent Islamic militant attack." 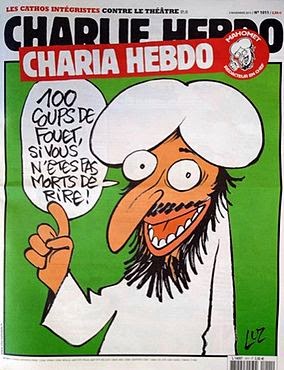 The cover of Charlie Hebdo following a 2011 firebombing of the magazine offices by Muslim extremists.  The caption says, "100 lashes with a whip if you don't die of laughter."  [image courtesy of the Wikimedia Commons]

The use of the word "apparent" is journalistic waffling, given that bystanders heard the gunmen shouting "Allahu akbar!" and "We have avenged the prophet Muhammad!"  The gunmen are still at large as of the time of this writing, and are the subject of a huge manhunt.

Leaders all over the world have responded to this atrocity.  Let's start with my favorite one so far, Ahmed Aboutaleb, the mayor of Rotterdam, himself a Muslim, who told the terrorists (and this is a direct quote) to "fuck off."  Here's the full quote, as translated by a friend:


It is incomprehensible that you can turn against freedom like that, but if you don't want that freedom, in heaven's name, take your suitcase and leave.  There might be a place in the world where you can be yourself and be honest about that to yourself, but don't go around killing innocent journalists.

That is so backwards, that is so incomprehensible -- disappear if you cannot find peace with the way we want to build our society here. Because we only want those people -- also all those Muslims, all those good-willing Muslims whom people are now looking to -- together, only those who are what I would call "our" society, and if you don't like this place because you don't like a bunch of humorists who are making a little newspaper, yes... how shall I put this...  how about you fuck off?

There has also, of course, been some opposite sentiment, and not just from Muslims in the Middle East.  Maori Party candidate Derek Fox of New Zealand said, basically, that slain Charlie Hebdo editor Stephane Charbonnier was himself responsible for the deaths:


The editor of the French magazine has paid the price for his assumption of cultural superiority and arrogance, he was the bully believing he could insult other peoples culture and with impunity and he believed he would be protected in his racism and bigotry by the French state.

Well he was wrong.  Unfortunately, in paying the price for his arrogance he took another eleven people with him.

Power cultures all like to use the old chestnut of freedom of speech when they choose to ridicule people who aren't exactly like them, and mostly they get away with it.

These guys liked the privilege but didn't think they'd be caught up in the ramifications - they were wrong.

This should serve as a lesson to other people who believe they can use the power they wield by way of dominating the media to abuse and ridicule others they believe to inferior to them -- just like [in] this country.

Well, the backlash against Fox was immediate and vitriolic.  Fox was victim-blaming, people said.  National Party MP Chris Bishop said that Fox's comment was "horrific, ridiculous, (and) shameful," adding that supporting freedom of speech was not "cultural supremacy."

And people who are outraged by the murders have responded the way outraged people do; by drawing Muhammad in all sorts of vile ways and posting them on the internet, by offering insult and ridicule to Muslims of all stripes, by escalating the situation in every way imaginable.

I'm a strong believer in freedom of speech.  Words are words, and no one deserves to die for them.  However, I'm also a strong believer in the cardinal rule for human behavior, which is, "don't be an asshole."  The cartoons at Charlie Hebdo were largely banal, broad-brush attempts to ridicule an entire people, not just to lampoon particular acts that deserved lampooning.  In other words, they weren't even good political satire, they were mostly just childish barbs on the level of "Muslims are poopyheads."

Add to that the fact that my general opinion is that Islam is a counterfactual set of beliefs whose precepts suggest -- no, demand -- doing all sorts of things like killing apostates, subjugating women, and forcibly converting non-believers.  This sort of thing rightly should be intolerable to free-thinking rationalists.

It's possible to detest Islam as a belief system, to decry the actions of its adherents, to mourn the deaths of the twelve staff members of Charlie Hebdo, to support fully the right of every human to speak freely, and at the same time to wish that all people would simply treat each other with more respect and less deliberate provocation.  The world is a complex place, and humans are usually less motivated by logic than they are by emotion; trying to come up with one blanket response to any incident is bound to miss the reality by a mile.

So continue speaking out.  Continue to criticize worldviews that incite their adherents to do evil.  But also continue to treat each other with compassion, to err on the side of thinking kindly of people, to work toward understanding.  To do otherwise would be to fall into the very errors we are trying to eradicate.
Posted by Gordon Bonnet at 3:54 AM